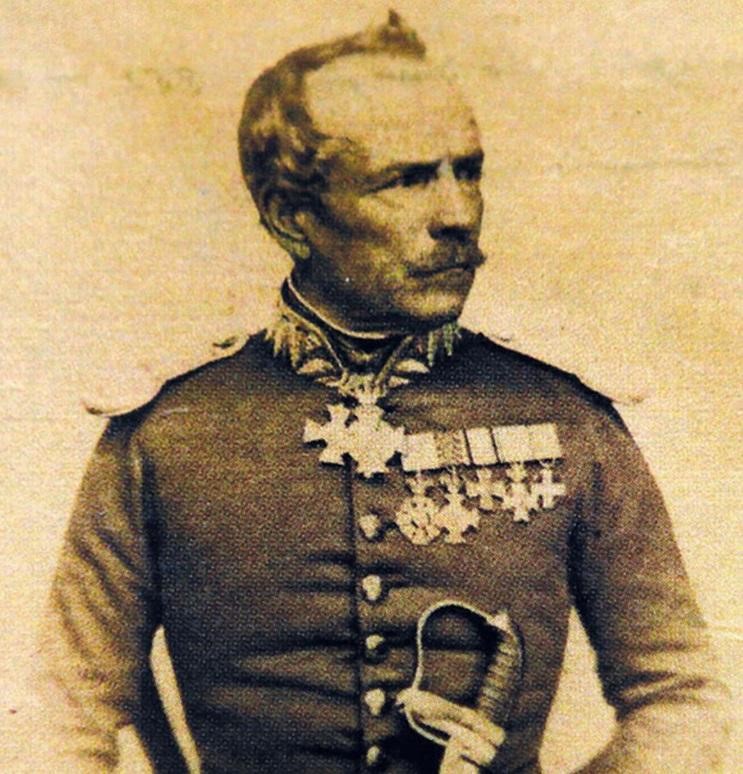 Karl Krazeisen (1794-1878), was a German officer, a prominent Philhellene and painter, who painted the portraits of the main fighters of the Greek war for independence.

There is no information about the first years of his life, except that his birthplace was the town of Kastellaun in the Rhineland-Palatinate[1].

Karl Krazeisen. Photo of an unknown photographer. Late 1840s – early 1850s. The person depicted is wearing the uniform of Colonel of the Bavarian Army. Among the Medals he bears are the Greek Silver Excellence of the Struggle (first from the right) and the Greek Brigadier General of the Order of the Knights of the Redeemer (second from the right). National History Museum, Athens.

Karl Krazeisen expressed his philhellenic sentiments, during the Greek revolution. In August 1826, he was serving in Bavaria, with the rank of lieutenant, when he decided to go to Greece to support the struggle of the Greeks. Without securing the necessary leave from his unit, he embarked on a long journey from Munich, and finally reached Nafplio in Greece, via Italy (Ancona), Durres, Corfu, Zakynthos, with stops in Poros, Aegina and Salamis. Then he moved to Athens and joined the Corps of Bavarian volunteers under the command of Karl Wilhelm von Heideck. This unit was created at the instigation of the king of Bavaria Ludwig I, father of the future king of Greece Othon[3].

Although he stayed in Greece for only a year, until August 1827, he took part in important battles, especially in Athens. Also, his presence in Aegina coincides with the arrival of the first Greek steamer, the “Karteria” (whose captain was the English Philhellene Frank Abney Hastings), as well as the frigate “Hellas”[4]. 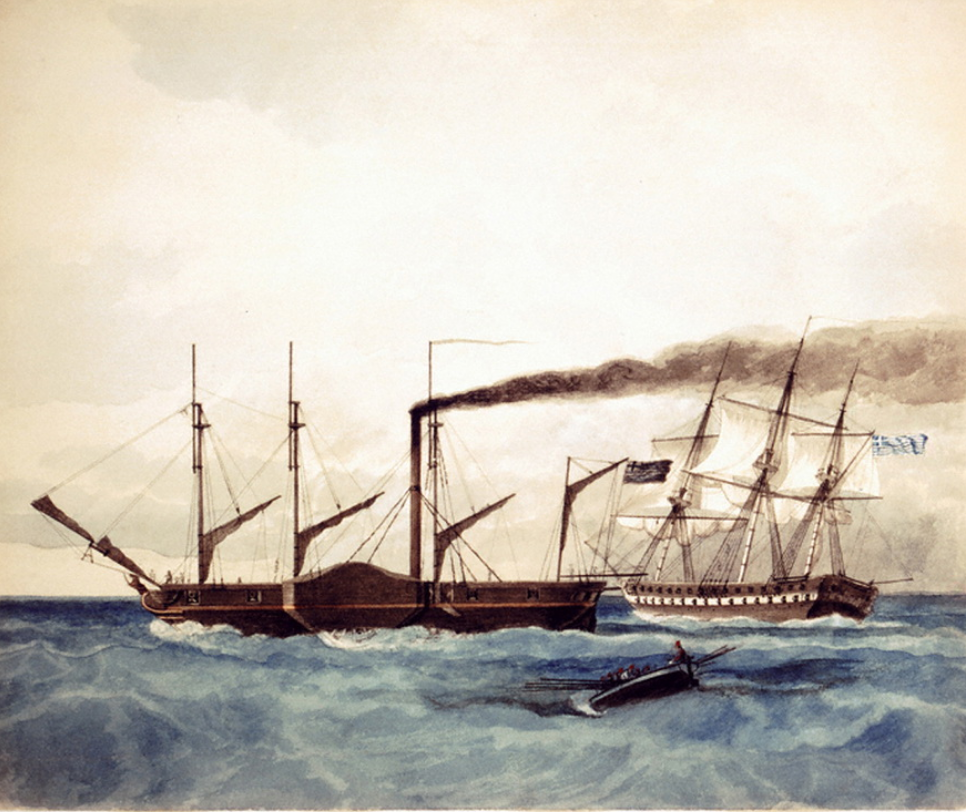 During his stay in Greece, Krazeisen served in Salamis and Nafplio, while he took part in the siege of Athens in 1826, under the orders of Charles Fabvier[5]. He also fought in the siege of the Acropolis, from March to April 1827, but also in the battle of Faliro, during which the Greek General Georgios Karaiskakis was killed. Krazeisen painted the face of the Greek General one day before his fatal injury. In August 1827 Krazeisen painted his last painting in Greece, that of the great Philhellene baron Friedrich Eduard von Rheineck (1796-1854).

Upon his return to Germany, Krazeisen was discharged from the Bavarian army due to his unauthorized absence, which constituted ‘’desertion”. However, he returned again to the ranks of the army, with a parallel recognition of his military ranks, for the sake of his service in Greece under the orders of Karl Wilhelm von Heideck.

Krazeisen was honoured with many German Medals, while at the same time he was the holder of the Greek moral rewards of the Silver Excellence of the Struggle and the Brigadier General of the Order of the Knights of the Redeemer. A depiction in the painting “The camp of Karaiskakis in Piraeus in the year 1827”[6], which was painted by Theodoros Vryzakis, reminds of Krazeisen’s military activity in Greece. The German officer, placed in the lower left corner of the painting, stands among the Greek warriors, with his right leg bent, while pointing to the Acropolis of Athens with his left hand. 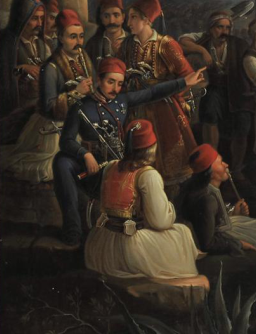 Karl Krazeisen left no memoirs or notes. But he left a very important artistic and historical work.

It all started on August 11, 1826 in Nafplio, when Krazeisen met Georgios Kountouriotis and sketched his portrait, which was the first he created. Gradually, he met most of the fighters and leaders of the Greek National Uprising of 1821. Among them were chieftains, navy captains, political leaders and Philhellenes. He first designed their portrait and then asked them to sign the work depicting them, as a certificate of authenticity. After his return to Germany, he created a series of lithographs that offer us the opportunity to know exactly the face of Theodoros Kolokotronis, Georgios Karaiskakis, Nikitaras, Ioannis Makrygiannis, Andreas Miaoulis, Konstantinos Kanaris, Kitsos Tzavellas, Tombazis, Georgios Kountouriotis, Georgios Mavromichalis, Andreas Zaimis, Sisinis and many others. And of course some of the most famous Philhellenes, like Charles Fabvier, Frank Hastings and Thomas Gordon[7].

After Krazeisen’s death, the collection of his work was inherited by his daughter, Maria Krazeisen – Fetova, the wife of Russian professor Ion Radionov Fetov, who taught in Berlin and later in Galatsi, Romania. After Maria’s death, her husband informed the Greek painter Nikolaos Gyzis about the existence of the lithographs and that he wanted to give them to the Greek State. Gyzis advised him to give them to the (under establishment) Museum of the city of Athens. On February 13, 1926, Fetov submitted the history of the collection and informed officially the Greek consulate in Galatsi, Romania, while assigning the sale to Antipas, a Greek resident abroad. A short time later, Zacharias Papantoniou, director of the National Gallery at that time, asked the Greek governmentt (through an article[8] he published) to buy the bequest. This was effected for the sum of 200,000 drachmas, and then it was handed over to the National Gallery. The collection includes the box with the watercolors and the brushes of Krazeisen, the leather skate of the fighter of 1821 Dimitrios Plapoutas, which is exhibited in the Branch of the War Museum in Nafplio, a photograph of the painter and 24 lithographs. At the same time, the detailed list of works in the Romanian language was obtained, with a brief introduction of the history, where it is emphasized that the portraits were designed from the natural models, and that each one bears the handwritten signatures of the person depicted.

Krazeisen lithographs can be found in the Eleftherios Venizelos Hall of the National History Museum in Athens. The collection has been presented in whole to the public three times at an exhibition level[9].

According to Pantelis Prevelakis, a professor at the School of Fine Arts, the portraits of Krazeisen “are enough to compose the archetypal image of the National Fighter that the collective subconscious looks for. Seen from the historical and psychological point of view, each portrait is an invaluable testimony for the race, the character, the social of the depicted“[10].

The director of the National Gallery Marina Lambraki-Plaka wrote about it: “…. Karl Krazeisen put the person pictured to sign at the bottom of the paper. We owe him admiration for his providence and gratitude for this silent and concrete testimony … If Karl Krazeisen had not taken painting lessons, he would have practiced so much that his drawings cannot be considered amateur works. His look is penetrating, sharp and supported by a hand that draws hesitantly, but with great precision and sensitivity. His drawings often have the quality of the neoclassical painter Engre … We owe indeed gratitude both to the heirs of Krazeisen who preserved this treasure and to Zacharias Papantoniou, director of the National Gallery at that  time, who had the inspiration to obtain it in 1926 …” [11].

SHP pays due tribute to Karl Krazeisen, because his Philhellenism combines both his action for the Freedom of the Greeks, and a strong spiritual part, which in the long run proves to be extremely historical, as he painted the figures of the important protagonists of the Greek Revolution of 1821, Greeks and Philhellenes, who would have been lost, leaving history in several points incomplete.

This is a rare series of the lithographs of Krazeisen, which are hand-painted. 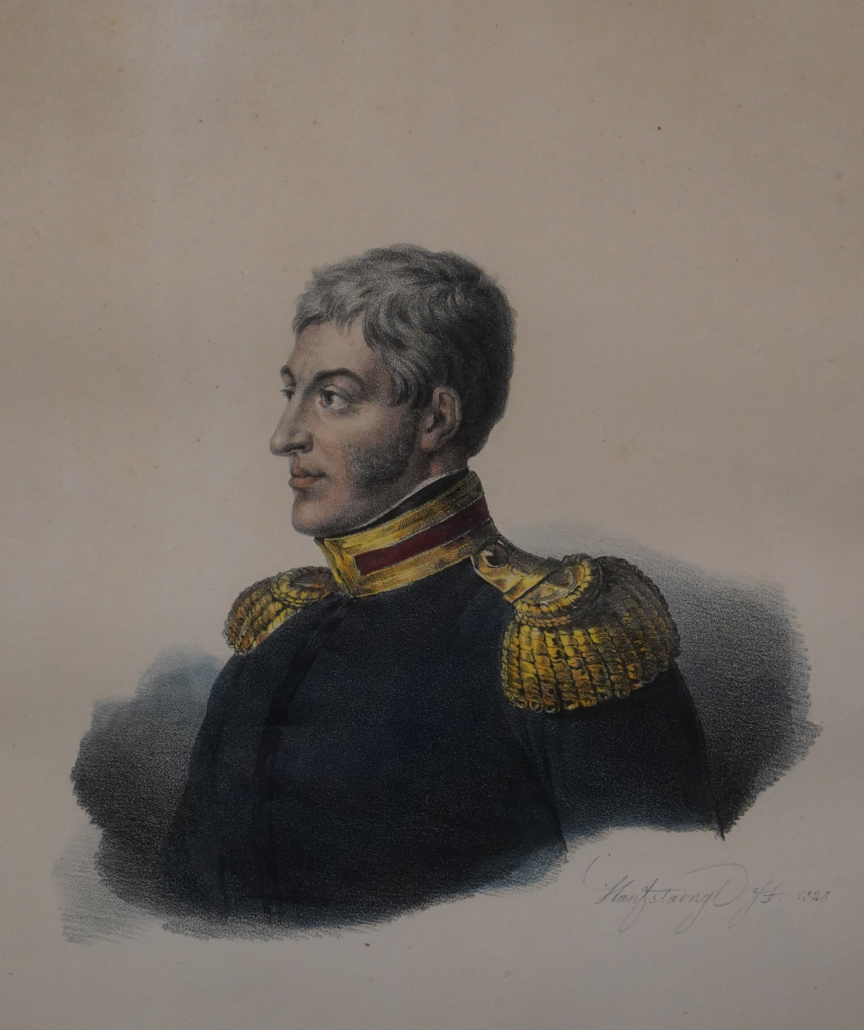 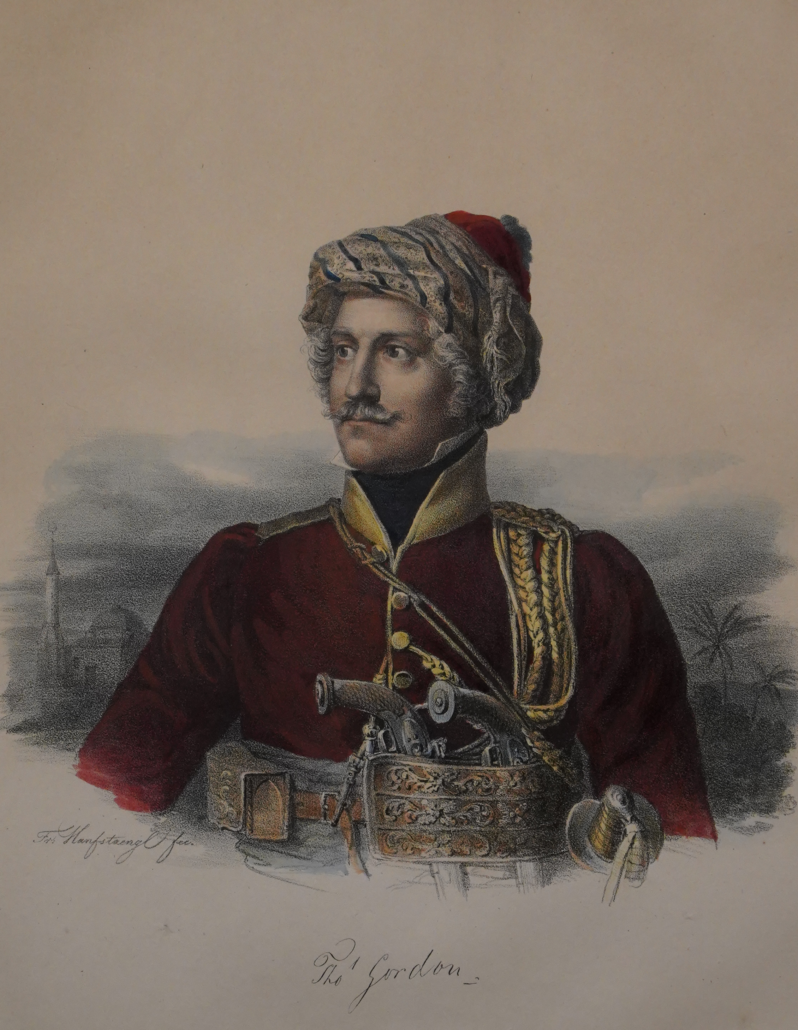 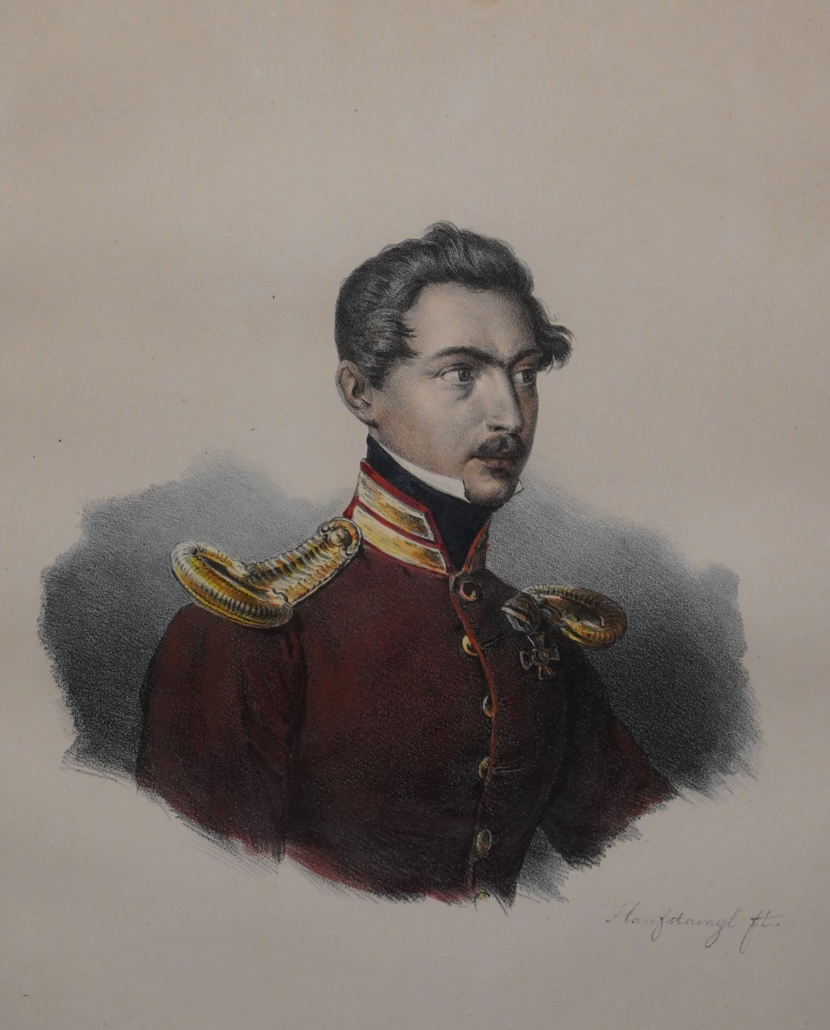