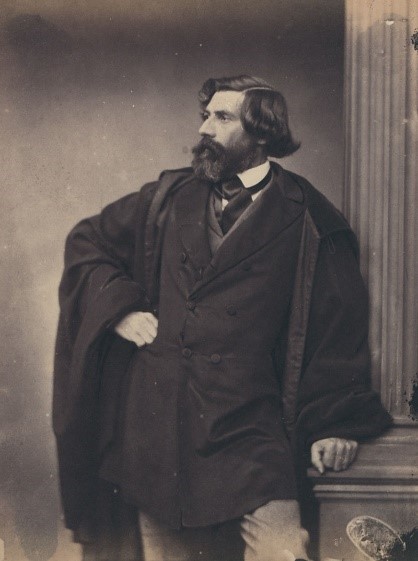 Ludwig Lange, was a German architect and designer, born on March 22, 1808 in Darmstadt. His father, Christian Friedrich (1759–1840), was a clerk of the Court. Ludwig had two younger brothers with whom he cooperated. They also followed an artistic path; Gustav Georg became a painter of the Royal Court and Julius a landscape painter.

Ludwig Lange abandoned High School at a very young age, and studied under the architect and politician Georg August Lerch (1792-1857) between 1823 and 1826. He then studied at the University of Gießen and collaborated with the architect Georg Moller (1784-1852). From 1830 onwards he lived in Munich, and began experimenting with his brothers with perspective designs and drawings of buildings and monuments, an activity he would continue and perfect in the following decades. His work stands out both for his painting talent and for the excellent perception of the space he had as an architect.

An important acquaintance in his life was that with the landscape painter, Carl Rottmann (1797-1850), in Munich. He studied with him between 1830 and 1834 and developed a friendship relationship. Lange accompanied Rottmann in Greece, when the Bavarian monarch Ludwig I instructed him in 1834 to travel there and enrich his repertoire for the completion of a series of Greek works. During this difficult journey, Lange was a valuable consultant for Rottmann´s architectural plans. Based on the experiences he gained in Greece, Lange wrote the “Reiseberichte aus Griechenland” (Travel correspondences from Greece, 1835).

However, apart from his association with his teacher, Lange was distinguished in Greece for his own talents. King Othon hired him as his “Expert Civil Engineer” (Baurat), after Lange presented his architectural proposal for the creation of a “Church of the Savior” (Erlöserkirche). The project was not implemented due to financial difficulties. However, he designed other important buildings for the new capital of the Greek state. The initial proposal for the design of the National Archaeological Museum was his own, but the architects who completed the project, namely Ernst Ziller, Panagis Kalkos and Armodios Vlachos, intervened in his original plans. The newly established Royal High School of Athens was implemented based on Lange´s plans, where he also taught Design since 1835. The construction of the royal palaces at the foot of Lycabettus, as Lange suggested, was not found as the most appropriate solution.

During his stay in Greece he created a number of drawings and watercolors, which he later processed as oil paintings. About 150 of his paintings survived. His works gained appreciation by his colleagues, such as Karl Friedrich Schinkel (1781-1841). Like his teacher Rottmann, Lange created landscapes of the historical sites he visited (Sikyon, Corinth, Athens and its ancient port, Piraeus). On a later trip to Greece, it is reported that he visited Hydra and the Cyclades with the author Ludwig Steub (1812-1888).

His works are distinguished by realism, accuracy, and the successful perspective rendering of places and buildings. He did not refer a lot to historical or romantic elements. However, in his watercolor “The Acropolis of Athens in the time of Pericles” (Die Akropolis von Athen zur Zeit des Perikles, 1835), he painted an imaginary reconstruction of the ancient Acropolis – not the modern image of its hill. 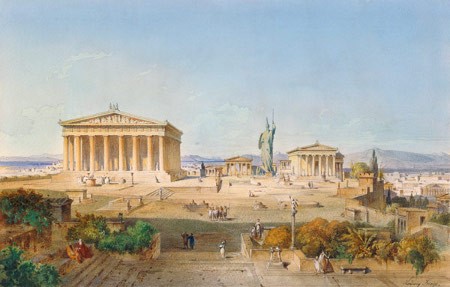 The Acropolis of Athens at the time of Pericles, 1835

He also attempted to depict contemporary Athens in his watercolor “Athens and the Acropolis from the Northwest” (Athen und die Akropolis von Nordwesten, 1836), although it is possible that the painter did not capture the landscape he saw with absolute accuracy. 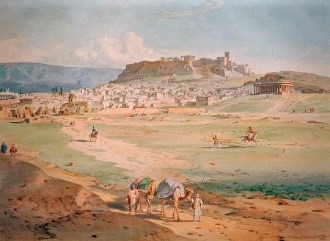 Athens and the Acropolis from the Northwest, 1836

The oil painting of “The Entrance to the free Athens” conveys his love for classical Greece once again, depicting the area, where the ancient Greek and Roman markets stood. This work was completed by Lange in 1838, after his return to Munich. 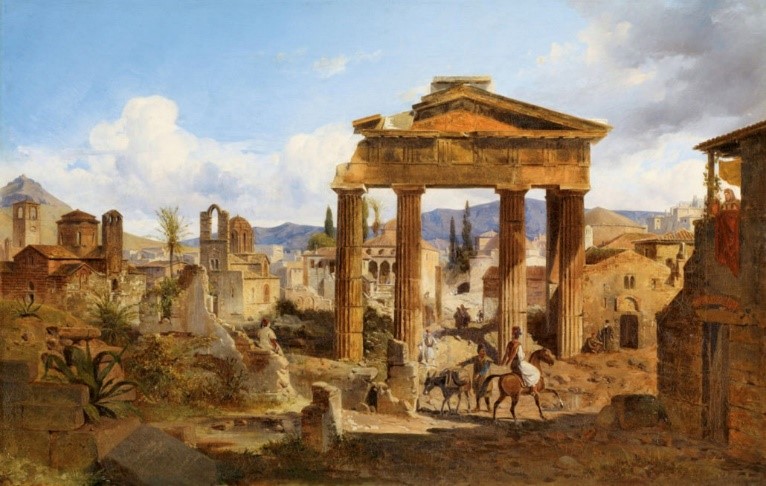 From 1839 onwards Lange worked on various projects commissioned by Ludwig, and from 1847 onwards he took over the chair of Architecture of the Royal Academy of Munich. He traveled to Germany and created various designs from prominent German cities, which were published in architectural magazines. At the same time, he designed some vignettes with scenes of the Athenian landscape for the “Panorama of Athens” (Munich, 1841) by the painter Ferdinand Stademann (1791-1873), who had also visited Greece after Ludwig’sinvitation. Lange created many architectural plans, including a “palace for the heir to the throne” in Munich (Kronprinz-Palais, 1845) and the Nikolaikirche (Church of St. Nicholas) in Hamburg. The famous Museum of Fine Arts in Leipzig has also been designed by Ludwig Lange. In 1858 Lange published in Munich the work “Die griechischen Landschaftsgemälde von Karl Rottmann in der neuen königlichen Pinakothek zu München” (The Greek Landscapes of Karl Rottmann in the New Royal Gallery in Munich) which describes the works of his teacher.

Ludwig Lange died on March 31, 1868 in Munich, where his grave stands today. His works helped to promote the image of Greece in Europe.

SHP honors the Philhellene architect and painter, Ludwig Lange, who laid the foundation for the architectural design of the National Archaeological Museum, and created a number of works for Greece, disseminating the image of the country internationally.

Christianity and Philhellenism in the 19th century