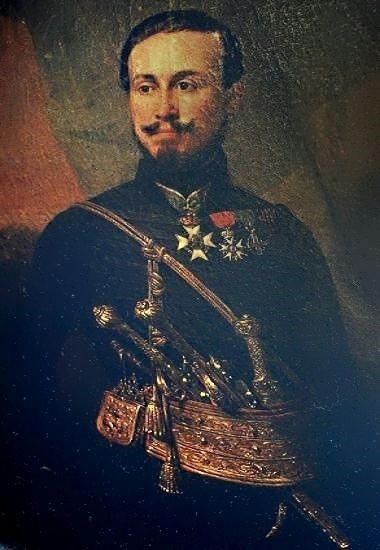 Colonel Olivier Voutier is another well-known French Philhellene officer who took part in the Greek War for Independence, promoted the cause of the Greeks throughout Europe with his writing, and contributed to the expansion of the philhellenic movement internationally.

He was born in Thouars, on the suburbs of Poitou, France, on May 30, 1796. He developed political activity and associated himself with the family of Emperor Napoleon III. At the same time, he was a writer with a literary work.

He enlisted in the French Navy at the age of just 15, being urged for this by his father. There, he received a multidisciplinary education and was introduced, among other things, to the plastic arts and design, which prompted him to develop, moreover, the status of an amateur archaeologist.

When the Greek Revolution broke out, “Mr. Voutier”, as his comrades-in-arms called him, had just lost a loved one, which had crushed him psychologically. Disappointed, he was looking for a noble cause, and left to fight in Greece. He ranked, as he confirms himself, among the first foreign officers who came to join the Struggle for liberation of the Greeks. He left Marseille on August 1, 1821, on a ship chartered by another important British Philhellene, Colonel Thomas Gordon from Scotland, carrying weapons and ammunition. A month later, he sailed to Hydra. There, he assisted the Greeks in their attempt to set up two artillery units at the entrance of the port, as he himself was an officer specialized in Artillery. 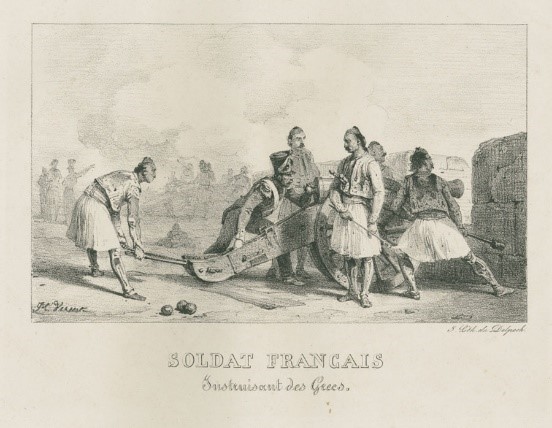 Lithography, early 19th century. A French officer trains Greeks in the use of cannons (SHP Collection).

He then went to Astros and finally he arrived at Dimitrios Ypsilantis’ camp. There, he was impressed by the poverty of the soldiers, most of whom were armed with damaged rifles. Voutier took over the “command of the operations” of the Artillery during the siege of Tripolitsa. He set up an artillery unit near the city’s small fortress and reinforced the siege. In his Memoirs he cites the information that he had “five canons, two of which were of eighteen liters, and two were mortars”. He even mentions that the Greeks “liked very much to see fired shells falling”, that they filled the canons with shells and they were targeting recklessly. After the fall of Tripolitsa, Voutier left for Patras and then for a tour in the Cyclades. Afterwards, he returned to Argos and participated in the siege of Nafplion, while at the end of December 1821 he left with Ypsilantis for the siege of the Acrocorinth. There he carried “two canons of twelve liters”, which he had brought from Hydra. From there, he joined the Battalion of the Philhellenes and took part in the Battle of Peta in 1822. In 1823 he returned to France, where he published his Memoirs. 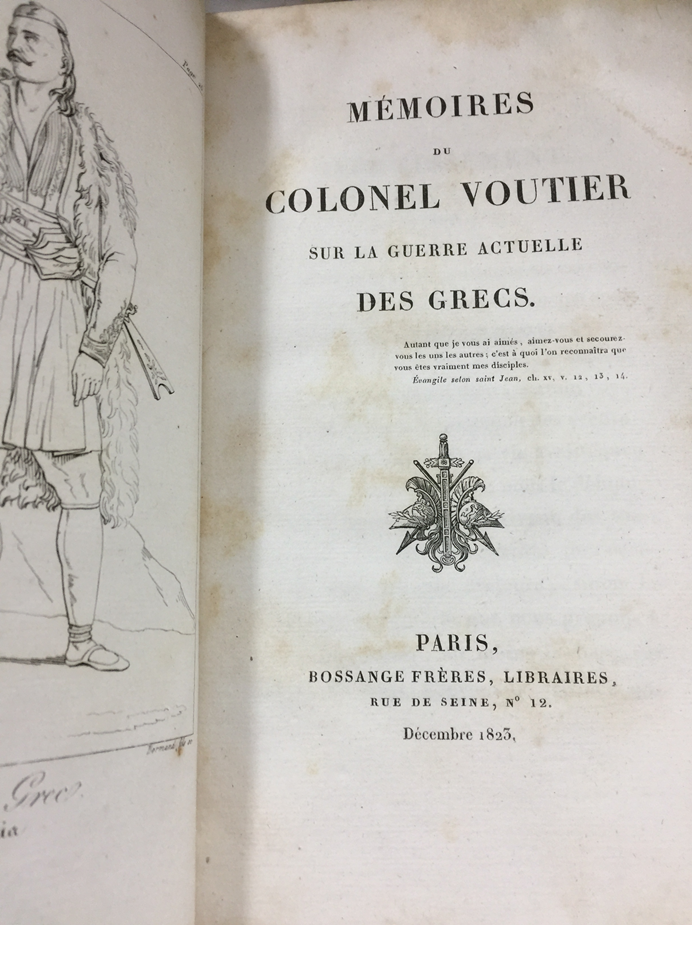 In 1824 he returned to Greece to leave soon and return again in 1826. In November 1826, he participated with the French Philhellene Raybaud, in a military operation (which failed) in Atalanti under the guidance of Ioannis Kolettis. His relationship with this French officer was competitive and bad. These differences led the two men to fight a duel, and they were both wounded. Voutier left Greece permanently in 1827.

This French officer believed that the Greeks deserved the sympathy of the Europeans, even if many times their attitude was disappointing. He fully understood their shortcomings, as he admits, and justified them. In his Memoirs, the French officer Olivier Voutier describes the historical course of the Greeks and the generative factors which led to the formation of the groups of Thieves (Kleftes), while at the same time he appears to be deeply religious. He fully understands the differences between the Greeks and the Turks, the sufferings of the Greek nation and the causes that led to the Revolution. At the same time, he puts forward the idea that strong and courageous faith were the means that helped the Greek people maintain their virtues and survive after so many atrocities. In a similar way, he understands the brutality of the war, as he realizes that these were horrific retaliations committed by both sides. However, like many other philhellenes, he criticizes the “predation of the leaders” and their tendency of looting as tactics, which did not allow the loots, coming from the successful battles and sieges, to enter the public treasury to help the Administration support the Struggle exercising policies centrally.

In an even more sincere spirit, he describes the pure and almost naive reaction of the population in front of the passage of the Philhellenes from the villages. The Greek population was excited, they ran in groups in front of the Philhellenes; the women saw them as angels who came from heaven to save them and the men greeted them with gunshots from their rifles. In these descriptions, he was sometimes criticized by his French compatriots, who accused him of exaggerating his role in his Memoirs,or even of inventing some of the facts he described.

Voutier is also the author of another work related to Greece, which, in fact, was published “in favor of Greece”, that is, in order for the revenues from its publication to be donated in favor of the Struggle of the Greeks. This is a collection, which includes letters to the Philhellene Mrs. Récamier (Voutier was frequently in her famous literary salon in France), documents about his office in the Army and evidence of his services (in order to refute the suspicions that, as mentioned above, “some wanted to create, accusing him of insincerity in his narratives”). This collection also contains translations of Greek traditional songs of military content. However, the most important part of this book is the “Study on the Regular Corps of Greece”. Voutier argues there that the model of warfare adopted by the Greeks (that is, the guerrilla type of warfare, which is based on the knowledge of the enemy’s means and habits), “does not require any other kind of soldiers than the Greek palikaria”. He also claims that “the freedom of the Greeks depends more on the war at sea, than on the war on the mainland”. Voutier’s study is indicative of the fact that Philhellenes recognized that the Greek guerilla mode was best-adapted to the morphology of Greek territory and that it was ideal against an enemy with overwhelming numerical superiority.

After the appointment of Alexandros Mavrokordatos as President of the Executive Body, in 1822, Voutier was promoted to the rank of lieutenant colonel. Along with Maxime Raybaud and François Graillard, he was appointed aide-de –camp of Mavrokordatos, and head of a small Artillery Corps, which disposed of two cannons. While the Regular Army was under the orders of Panagiotis Rodios in 1824, Voutier was promoted to Colonel. He was appointed commander of the Artillery Corps, which consisted of 100 men, who were in charge of managing and using the cannons of the Nafplion fortress. Voutier was highly regarded by the Greek government and was honored with the Medal of the Knight of the Golden Cross of the Order of the Redeemer.

Before coming to Greece in 1821, Olivier Voutier was directly involved in the discovery of the statue of Aphrodite of Milos (known today internationally as the Venus of Milo), in April 1820, and played a key role for the statute to end up at the Louvre Museum.

In April 1820, Voutier was 23 years old and a member of the crew of the French navy’s training ship “Estafette”. When the boat reached the island of Milos, Voutier asked a local resident named Kentrotas, to help him dig the ground of an ancient Greek temple to look for ancient artifacts. By chance, when night fell, they found the statue of Aphrodite of Milos. Kentrotas and the elder citizens of Milos then decided to sell the statue. Voutier and another French officer with a classical education, Dumont d’Urville, wrote to the French ambassador in Constantinople, Marquis de Riviere, and persuaded him to buy the statute, a purchase which finally took place on May 22, 1820. In fact, in the meantime, the Ottoman Empire had reacted, punishing the inhabitants who did not surrender the statute to it, and France paid an additional compensation in September 1820 to cover the fines imposed on Milos. The historical research (D. Chalkoutsakis, etc.), based on the testimonies of the people involved and six letters from French officers and executives, which were published in the French press in 1874, confirms that Voutier remained in France best known for this important discovery (which offered to the Louvre one of its most important exhibits), and less for his participation in the Struggle for Greek Independence.

This act of the purchase and appropriation of this important archeological monument from its birthplace, is evaluated negatively with the standards of today. This statute was donated by King Louis XVIII of France to the Louvre, and has been (and still is) one of its most emblematic exhibits, which among others promoted to the French public the beauty of the classical culture of Greece. In fact, this statute was another element catalyst for the expansion of the philhellenic movement in France and Europe, and the cultivation of the idea that Greece deserved to be liberated and that this was Europe’s duty. Ιτ prompted thousands of other young people, to take political, social, or even military action on the side of the Greeks.

Olivier Voutier was one of them and he was very proud of his involvement in the Struggle for Independence. He even asked for his tombstone to refer to it, and it indeed invites us to remember him as a “hero of the Greek Independence”. He died on April 19, 1877 in Hyères, Provence, France.

In his honor, a street in Athens (Filopappou area) bears his name: “Voutier Street”.

The Tomb of Olivier Voutier in Hyères, Provence.

‘21 The Renaissance of Greeks: Watch the first 4 parts of the documentary...