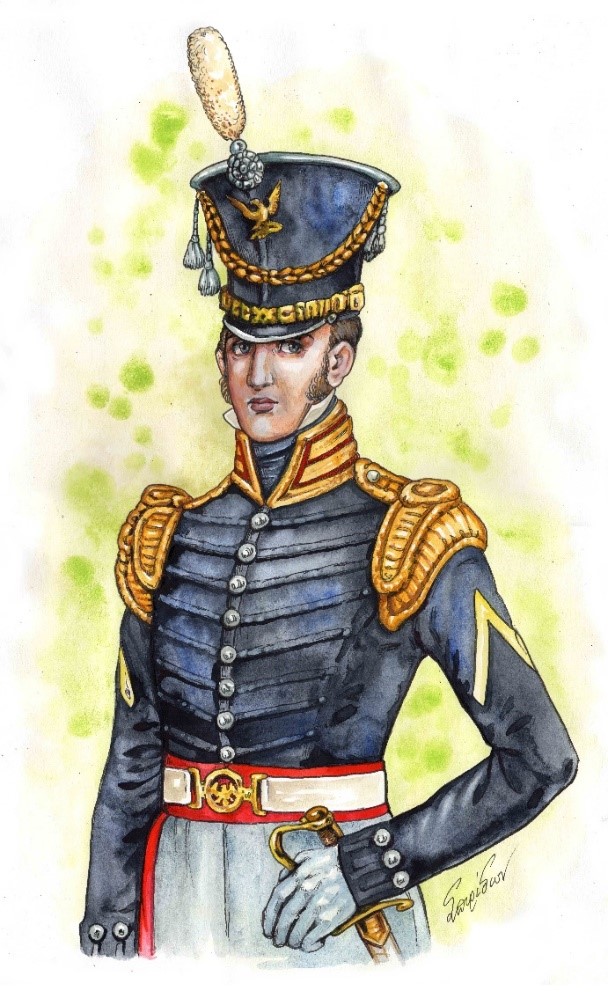 William Townsend Washington (1802-1827) was an American Philhellene from the State of Virginia in the United States of America. He was a Lieutenant in the US Army (4th Artillery Regiment). After attending the West Point Military Academy, he spent some time in France, where he befriended General Lafayette (Gilbert du Motier de Lafayette, 1757-1834). Upon his return to the United States, Secretary of Defense John C. Calhoun (1782-1850) assigned him a military teaching position.

Excited by the Greek issue, Washington resigned from the US Amy in order to go to Greece. He was aware of the importance his surname carried due to his relationship with the first President of the United States, George Washington. Washington used his name to promote his plans for Greece.

During the period that Washington was active in Greece, the American Philhellene Merrett Bolles arrived from Ohio. He was a captain of the American Navy, who served in the Regular Army in Greece (1825 – July 1826) under the French Philhellene General Charles Fabvier.

Washington arrives in Greece at a very critical point of the Greek Struggle. In the winter of 1824-1825, Ibrahim landed in the Peloponnese. The Greek forces are in disarray, with many chiefs in prison. Papaflessas decides to defend the Greek positions in Maniaki, Messinia, thus preventing Ibrahim’s forces from spreading to the Peloponnese. He falls heroically in the Battle of Maniaki in May 1825. The government appoints Theodoros Kolokotronis chief commander of the army. However, the Greek forces are unable to confront the regular army of Ibrahim.

The French Philhellene Fabvier undertakes to organize a regular army (from July 1825 onwards).

In order to confront Ibrahim, the Greek government asked already in May 1825 the London Philhellenic Committee to reinforce the Greek revolutionary forces with another 4,000 men.

Already in October of the previous year, the Philhellenic Committees in the USA proposed to the London Philhellenic Committee to form and send to Greece a Legion of Philhellenes volunteers, which they would finance. The London Committee requested approval by the Greek government. This proposal was not implemented, probably because the Greek military believed that certain Greek politicians would use this Legion to strengthen their powers. The fighters in the irregular army worried that the existence of a regular army corps would mean that they themselves had to be subject to rules of discipline.

The necessity of a foreign Legion of regular army is recognized by Andreas Louriotis and Ioannis Orlandos, who also negotiated the first national loan to Greece. They suggested Charles James Napier (1782-1853), a British officer and a representative of the British authorities in Cephalonia, to lead this corps. Several Philhellenes agreed that a foreign military corps would assist the Greeks significantly in their Struggle. French Philhellene, General Roche, tried to convince general Georgios Karaiskakis about the positive influence that such a corps would have on the Greek Cause.

Washington arrives in Greece in June 1825, and raises the issue of founding a “Foreign Legion” to further strengthen the Greek Struggle. He does not imagine a corps, which would be staffed exclusively by American volunteers. Washington dreams of an international Legion, composed by Americans, French, Italians, Germans and Irish officers. He accepted that the Greek government would define the percentage of participation for each nation. The soldiers would be recruited in Ireland; in case the British government rejected this option, the soldiers would be found in Switzerland and the USA. It is understandable, that the transfer of volunteers from Ireland and Switzerland was incomparably easier than the one of American volunteers.

Washington had specific plans regarding the formation of this Legion, which he aspired to lead, as he bore a name with historical significance.

In Hydra he met the Kountouriotis family, then went on to Nafplio to meet Alexandros Mavrokordatos. In July 1825 he announces his full plan to Mavrokordatos, citing a detailed calculation of the expenses for the maintenance and transportation of the new army corps. He requests that the volunteers fighting in Greece would have the rights of a Greek citizen after the Liberation. Then Washington formally requests the Greek Administration’s approval for his plan, in order to visit the European capitals (London, Paris and Dublin) and gather his officers. After this he would lead the Legion to Greece.

For the reasons stated above, Washington’s Plan was finally abandoned.

When the Greek politicians submitted an “Act of Subordination” to Great Britain, Washington, along with other Philhellenes, strongly reacted against the possibility of Greece being put under English protection (as was the case for the Ionian Islands), after its liberation from the Ottomans. The American Philhellenes, in consultation with the French General Roche, submitted a written protest to the Greek government asking them not to proceed in such a direction.

In fact, Washington adopted a tough stance against Great Britain, and promoted (along with General Roche) the assignment of the Greek throne to a member of the French royal family. Both of them tried to impose this political line on the Philhellenic Committees in the USA and France. This attitude, however, was renounced by both countries.

This evolution in Greece disappointed Washington, who decided to leave the country in 1825. In fact, he started his journey from Smyrna. While he was in Smyrne, he was wearing a Greek attire, provoking the hateful gaze of the Ottomans. During his trip, he was informed that England would not undertake the protection of Greece. So he asked to go to Messolonghi (October 1825). There he fell ill and was transported to Nafplio. 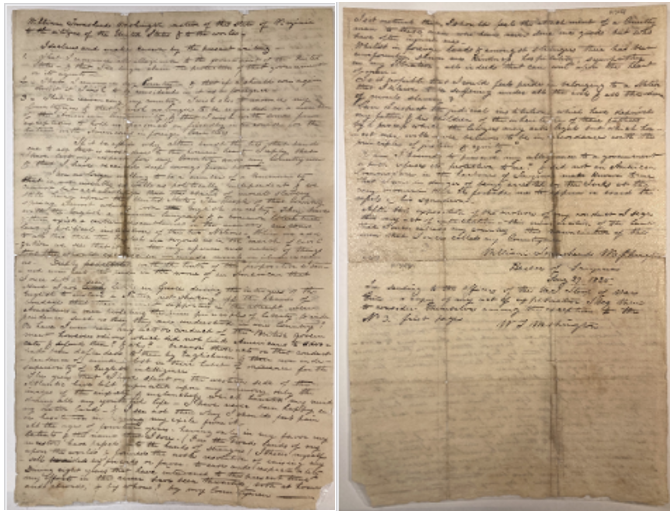 His country’s attitude on the subject hurt him so much that he wrote a harsh letter criticizing strongly his own homeland.

In May 1827 he went to Zakynthos, which was under British administration. There, it is said that he fell in love with Markos Botsaris’ daughter, Vasiliki, whom he asked to marry. Markos’s brother, Costas Botsaris, refused to agree to this marriage. 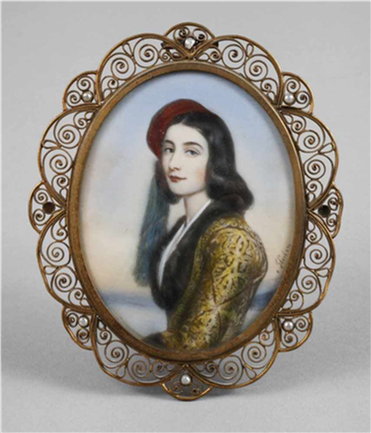 After Zakynthos he went to Nafplio, and joined the forces of Chief Photomaras. In fact, it is reported that he fought bravely. At the same time he worked to reconcile the warring factions of the Greeks. 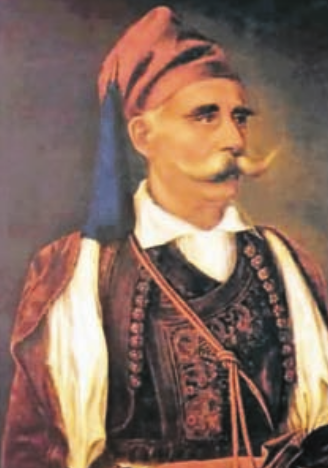 During a clash between Greek factions on July 16, 1827, Washington was eventually killed by a shot fired from Palamidi towards the city of Nafplio. He was taken to the British ship Asia, where he breathed his last. He lost his life at the age of just 25, passionately serving the ideals he believed in and of course Greece, which he dearly loved.

The tomb of the American Philhellene, William Townsend Washington, is located in Hydra, the place where he was hosted when he arrived in Greece. 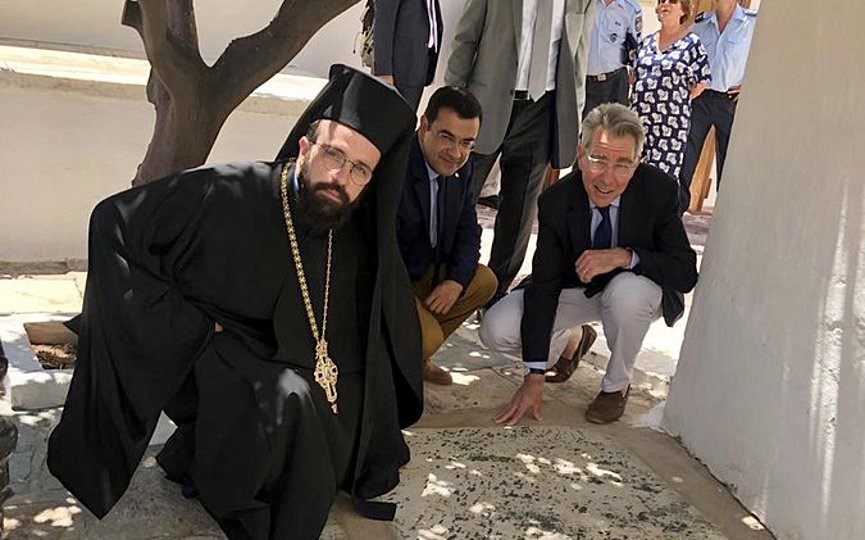 US Ambassador G. Pyatt at the tomb of William Townsend Washington in Hydra

One thing is certain about the American Philhellene, William Townsend Washington. He fought bravely for Greece, which he loved with an incredible passion.

The story of the great German Philhellene Heinrich Treiber