Ambassador and historian, Fotini Tomai, referred to the history of American Philhellenism, stressing that “Americans of all ages, sexes, or professions rushed to offer help to the Greeks, the volume and value of which, even today, is exciting. All kinds of supplies, in clothing and money from fundraisers and dancing balls organized by philhellenic committees in major cities, arrived one after the other in Greece. Overall, the aid sent to Greece is calculated in money and goods for the year 1827, $ 80,000, and for 1828, $ 60,000, high sums at that time.

“From his side, the president of the EUROPEAN DYNAMICS group, Konstantinos Velentzas, noted: “The American people contributed decisively to the cultivation of the philhellenic movement internationally and Philhellenism strongly marked the political social and academic life in the USA in the 1820s. This phenomenon was characterized as a Greek fever. Many of the Philhellenes acted in America, gathering and sending money repeatedly while others actively participated in the liberation struggle in Greece. The greatest Philhellene is Dr Samuel Gridley Howe.” Mr. Velentzas then presented the work and actions of Samuel Gridley Howe.

Samuel Gridley Howe was born in 1801 in Boston and died in 1876 in Massachusetts. He participated in the revolution of 1821 as a military doctor at the forefront. His bravery and ability as a commander gave him the euphemistic title Lafayette of the Greek War of Independence. He supported the philhellenic movement in the US writing letters and a book. He founded hospitals in Poros and Nafplio, built the port in Aegina, organized an orphanage shelter and a rural unit in Examilia, Corinth. He was honored with the Cross of the Savior. In 1866 he came again to Greece bringing an aid to help refugees during the Cretan Revolution.

A brief greeting was made on behalf of the US Embassy in Greece, by the Public Relations adviser, Monica Camming, with particular reference to the close ties and good cooperation between the United States and Greece.

During the event, honorary titles were awarded to descendants of the American Philhellene Samuel Gridley Howe. 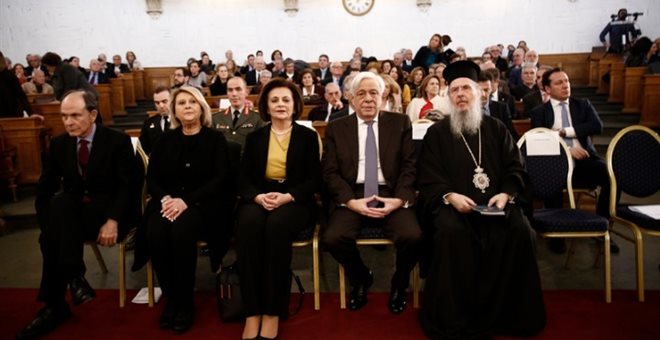