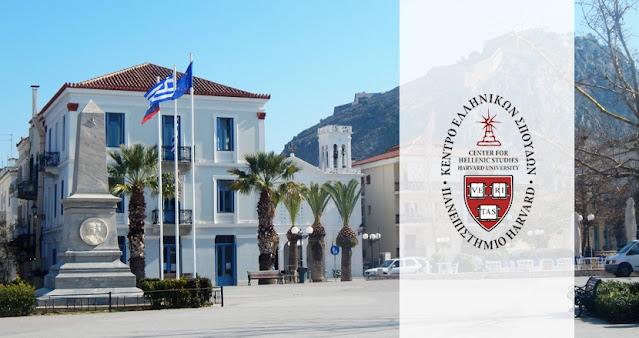 The Center for Hellenic Studies in Greece (CHS Greece) offers a fellowship to a postdoctoral researcher to conduct original research on topics related to Philhellenism as a movement of the 18th and 19th centuries as well as a phenomenon whose manifestations and repercussions persisted in the years that followed. The duration of the fellowship is 12 months (June – May), during which the fellow completes a research project of their own choice. This fellowship is organized for the second time in collaboration with the Society for Hellenism and Philhellenism (SHP) which provides access to the collection and archives of the Philhellenism Museum. The program is co-sponsored by European Dynamics SA.

The fellowship includes among others: a year-long appointment as CHS Fellow in Philhellenism, beginning on June 1, 2023; a stipend of $12,000; year-long access to all Harvard electronic resources; a 10-day trip to CHS in Washington DC; as well as invitations to participate in events and present their research on CHS websites, social and other media. Applications from postdoctoral researchers in the early stages of their academic careers or in non-tenure-track positions will be prioritized. For more information about the scholarship visit the link.

Read also the post by the 2021 inaugural CHS Fellow in Philhellenism for better insight by clicking the link. 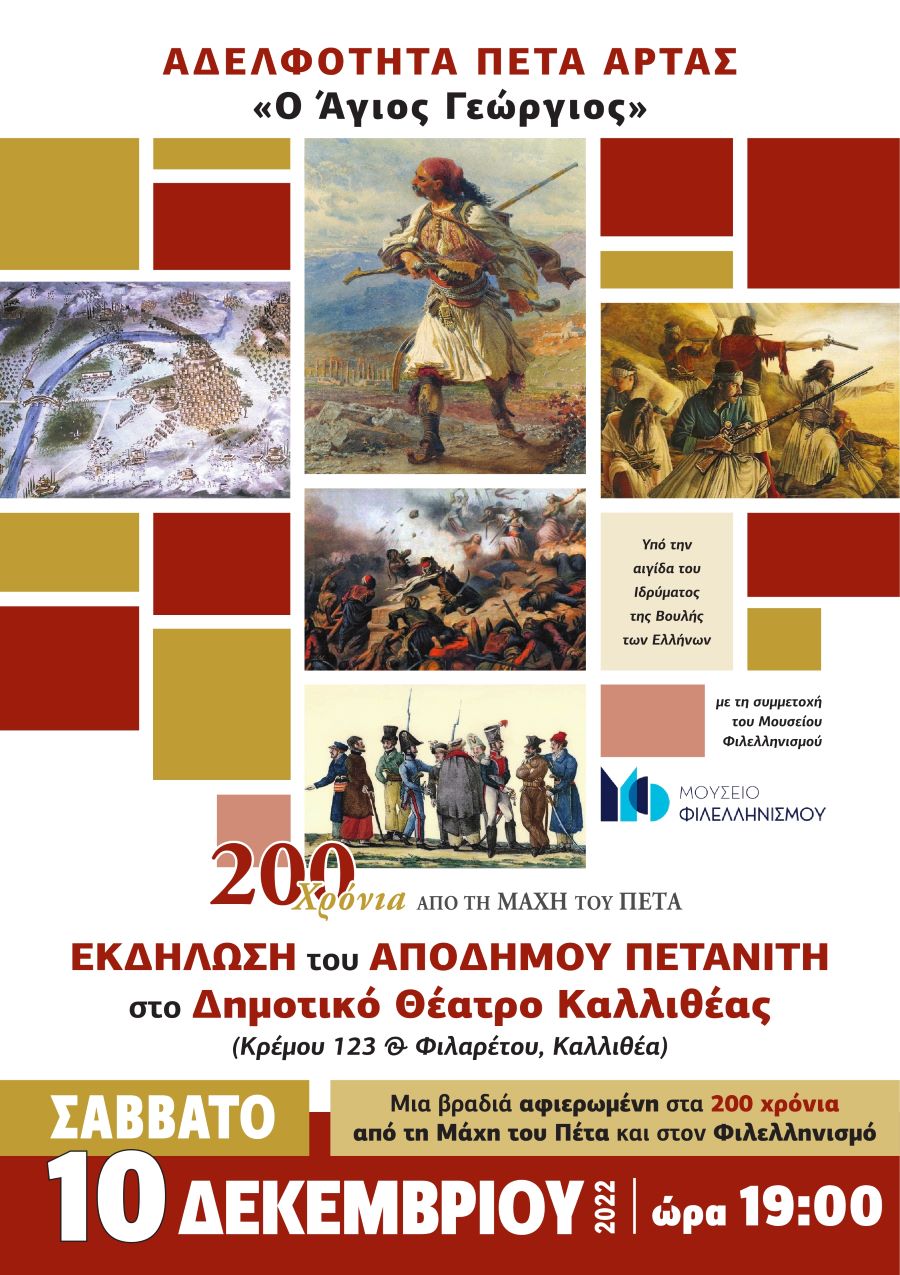 The Arta’s Peta Association, in collaboration with the Philhellenism Museum, organize an event dedicated to the battle of Peta and Philhellenism.

The event has been put under the auspices of the Hellenic Parliament Foundation.

The program of the event follows.

The event will take place on Sunday, November 13, 2022 at the Byronic Society in Messolonghi. Professor Kostas Papailiou, member of the Advisory Committee of the Society for Hellenism and Philhellenism, will be the key note speaker of the event.

The event takes place on the occasion of the bicentenary from the death of General Normann in Messolonghi. 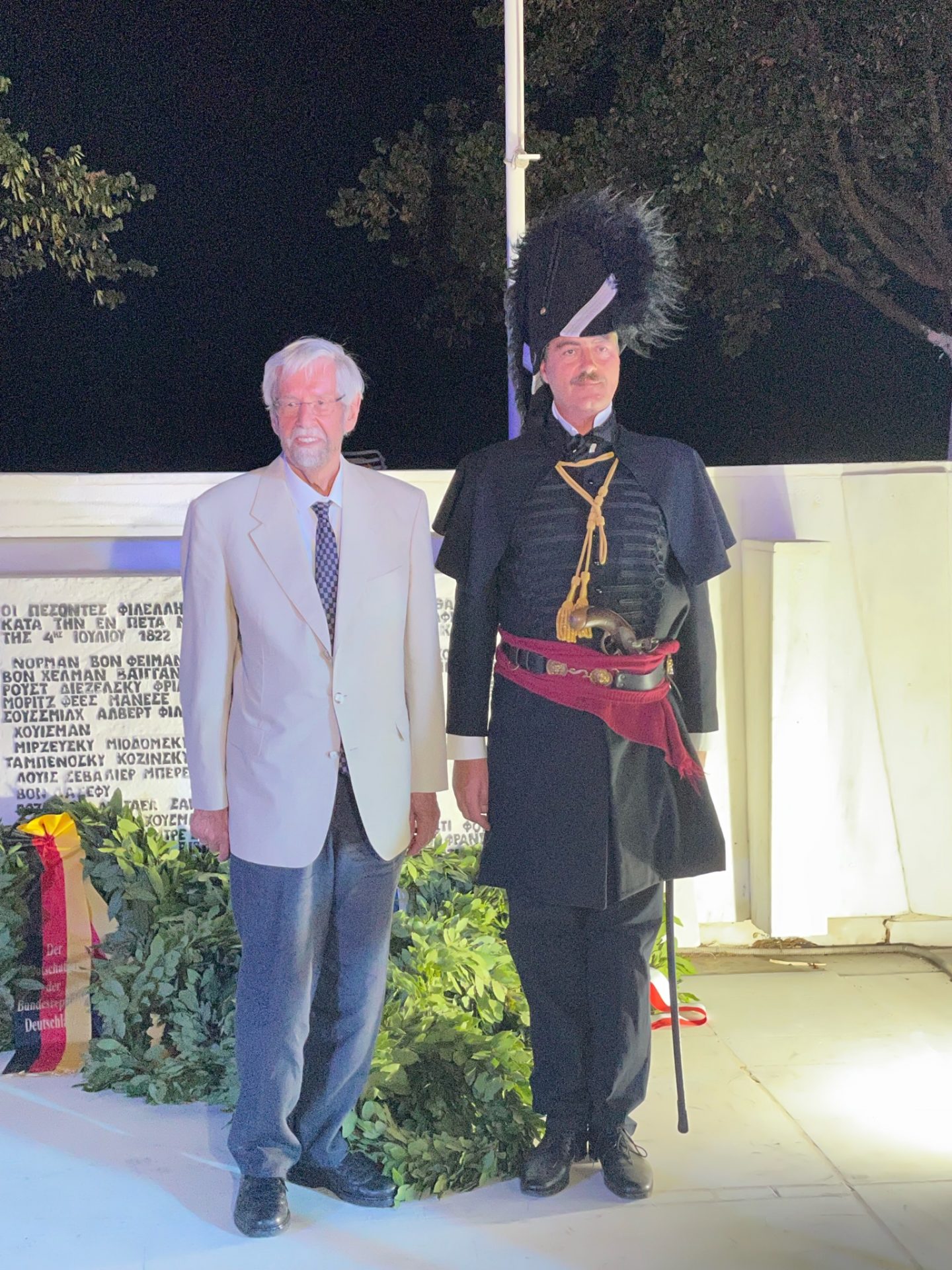 The Society for Hellenism and Philhellenism (SHP) co-organized with the Municipality of Nikolaos Skoufas-Peta, the ceremony for the 200th anniversary of the historic battle of Peta. SHP participated with a keynote speaker, an honorary ceremony of 10 Philhellenes re-enactors, and the Dresden Philhellenic choir, which was conducted in the 19th century by the German Philhellene Elster, who participated as a volunteer in the battle of Peta. During the event, SHP honored Paul Graf von Normann-Ehrenfels, a descendant of the great German Philhellene General Normann, the leader of the Greek Regular army in the battle of Peta, with the Lord Byron Medal. 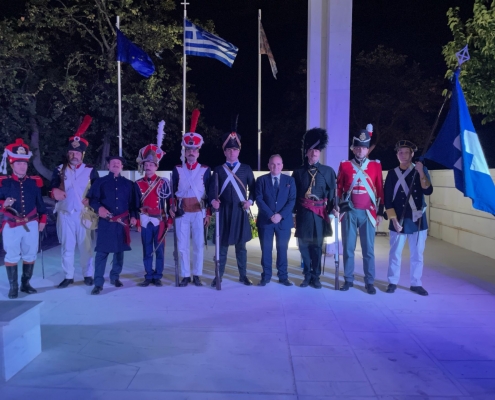 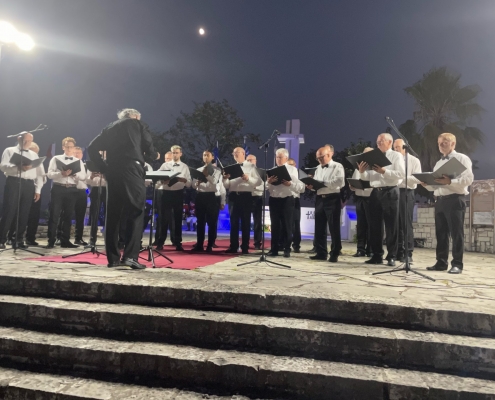 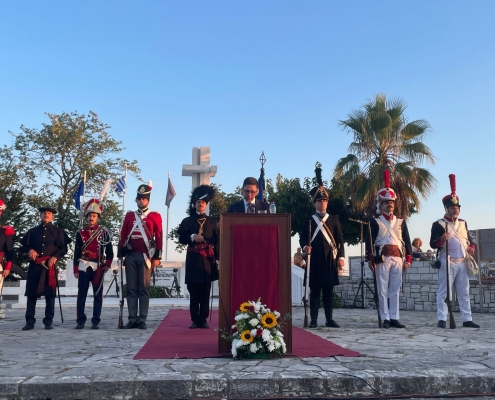 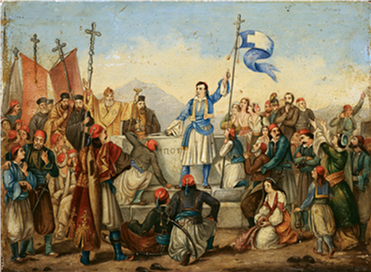 What is the Philhellenism Museum?

May 18 is the International Museum Day, and we take the opportunity on this occasion to remind the mission of the Society for Hellenism and Philhellenism (SHP) and the Philhellenism Museum.

The goal of the Philhellenism Museum is to present through 3.000 paintings, art objects, books, documents, medals, letters, personal objects, images – lithographs, etc. the birth and evolution of Philhellenism, but also the critical role that it played for the liberation of Greece.

The Museum aspires to answer through experiential navigations, to the Greek and foreign visitors, a series of important questions. Here are some of them:

The answers to these questions form an integral part of modern Greek history and it is a matter of principle for Greece to know this history, to promote it and to pay tribute to those who deserve it.

At the same time, however, the Museum of Philhellenism aspires to emphasize another important dimension.

Professor Jacques Bouchard, Director of the Modern Greek Studies Program at the University of Montreal in Canada, explains: “For me Greece represents Hellenism’s anchorage through the ages and the Holy Land of the West“.

So why do foreign tourists, but also students from all over the world, crowd in the archeological sites of Greece? Does this act constitute, indirectly or directly, consciously or unconsciously, the “pilgrimage of the citizen of the Western world, to what constitutes the Holy Place of Western civilization”? Isn’t it what the first trip of Lord Byron (and so many other famous and anonymous) to Greece represent? Isn’t it what the work of Byron Childe Harold’s pilgrimage is about?

Greece is the center of a large cultural ecosystem.

The goal of SHP and the Museum on Philhellenism is to allow the whole planet, and especially the societies that are inspired by Western culture and rely on it, to realize that they have a place and an equal role on the side of the Greeks, who continue to be the guardians of the universal humanistic values ​​of freedom and democracy.

Our aim is to build relations of friendship and cooperation with our allies around the world, to whom we will always remind that we honor what their ancestors offered to us, and that they continue to have the same motivation to support Greece, the cradle and the Holy Land of their own culture.

Our aim is to launch a new Philhellenic movement of the 21st century.

SHP and the Museum on Philhellenism aim to fulfill this mission. 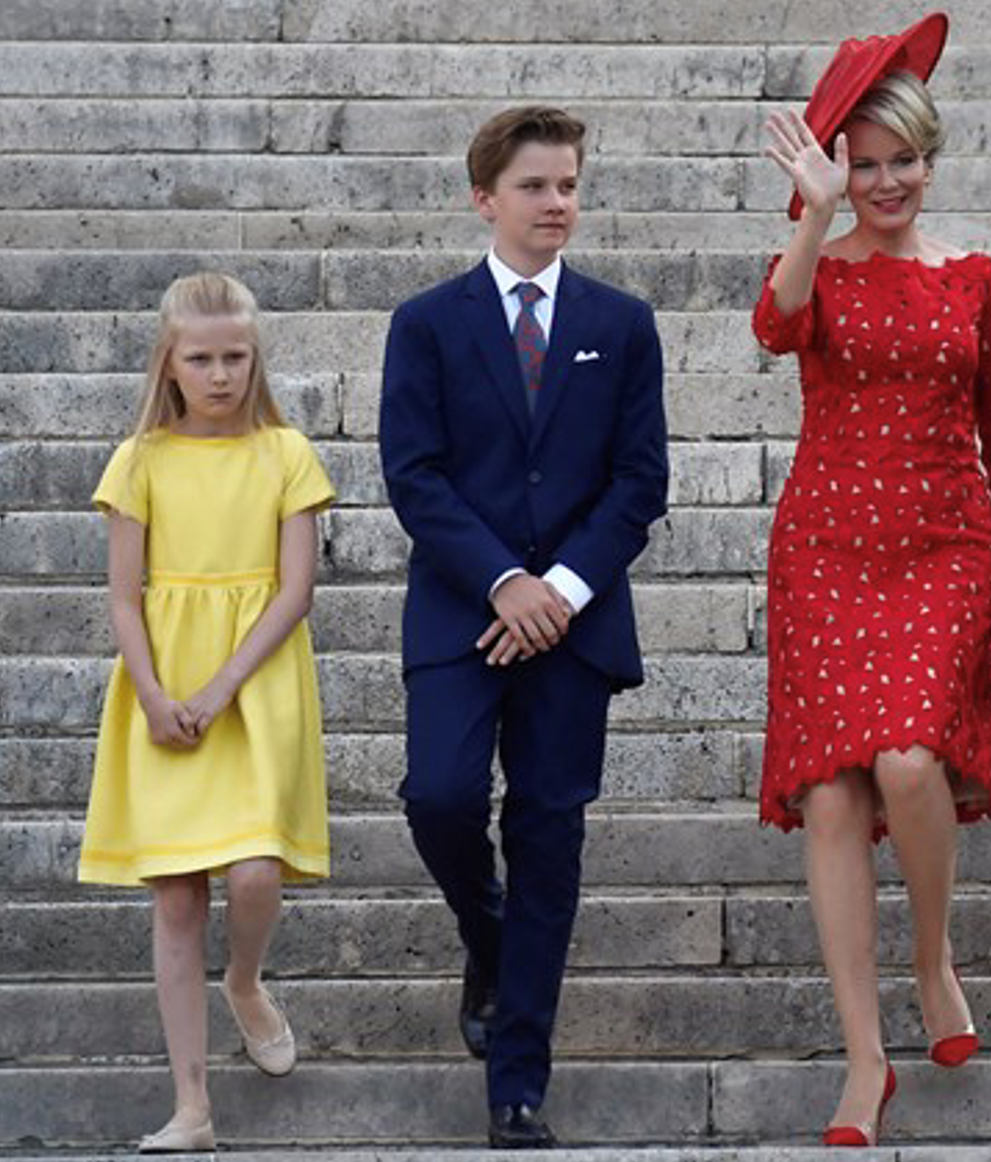 On the occasion of the visit of the Belgian royal family to Greece, the SHP and the Philhellenism Museum remind that many Belgian Philhellenes supported the Greek Revolution.

The most important of these was Augustin De Lannoy, who took part in many battles. The last one was in Karystos. He died a little later injured in Andros.

You will find his biography here.

Moreover, the arms industry of Liege (one of the best in the 19th century), sent weapons to Greece on the initiative of Belgian Philhellenic committees. 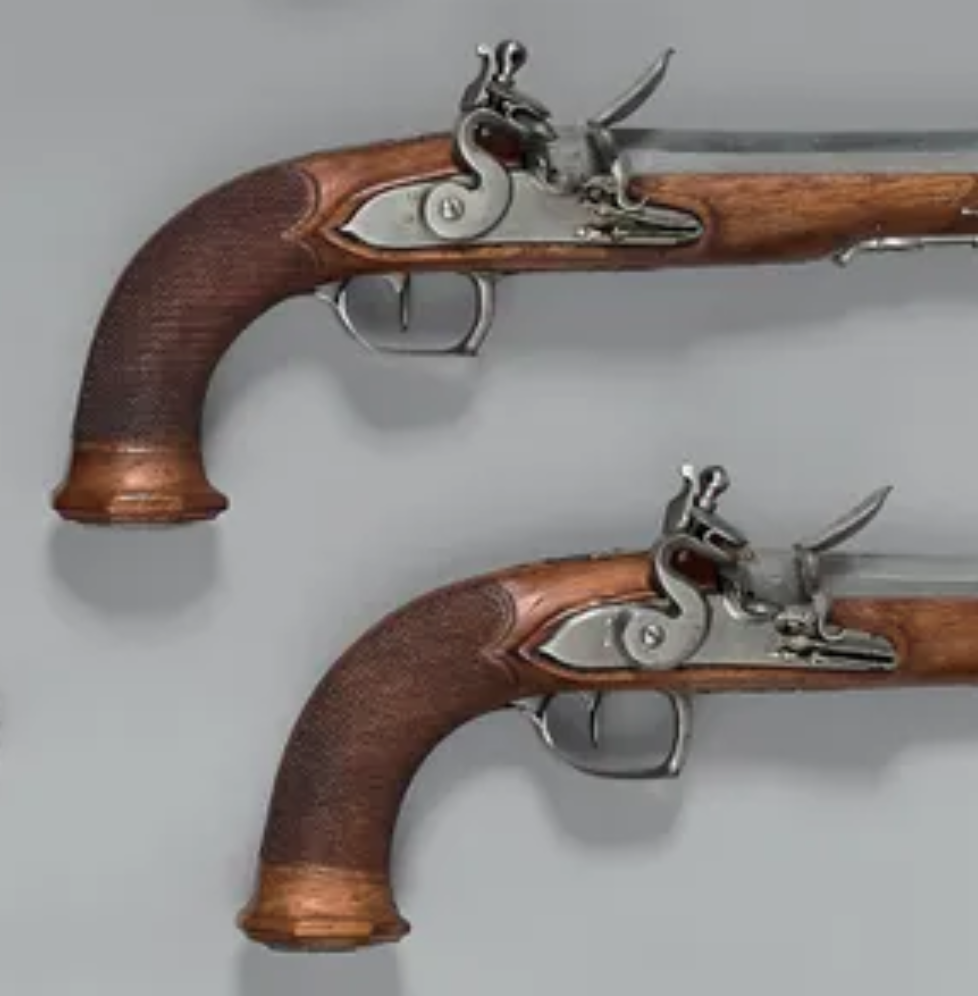 The missions were funded by fundraisers and proceeds from concerts in favor of the Greeks. 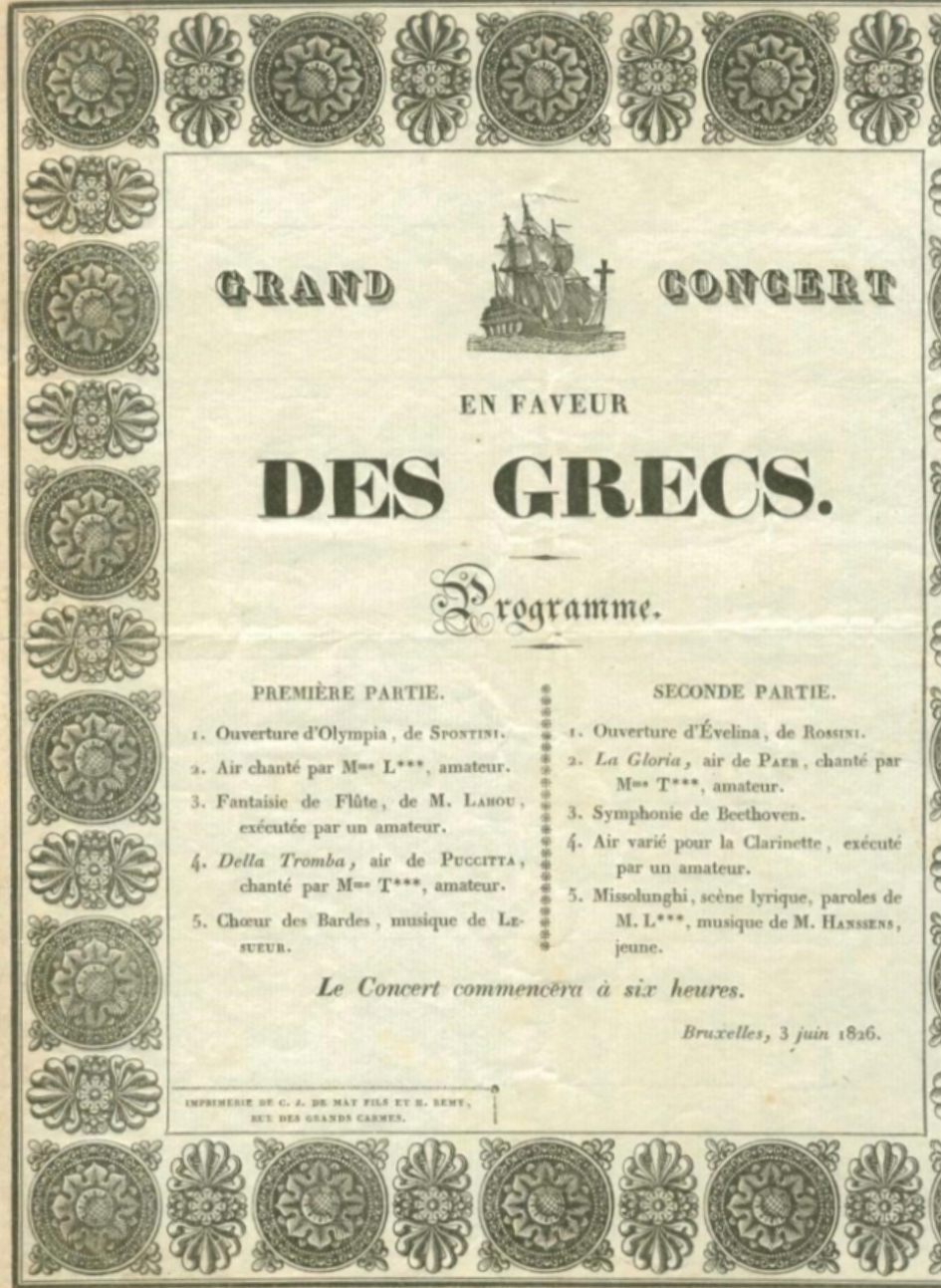 Programme of June 3, 1826, of one of the many concerts that took place in Belgium in favor of the Greeks. The aim of these events was to raise money for the financial support of the Greeks, and to promote the rights of Greece (SHP collection / Philhellenism Museum).

More information can be found here. 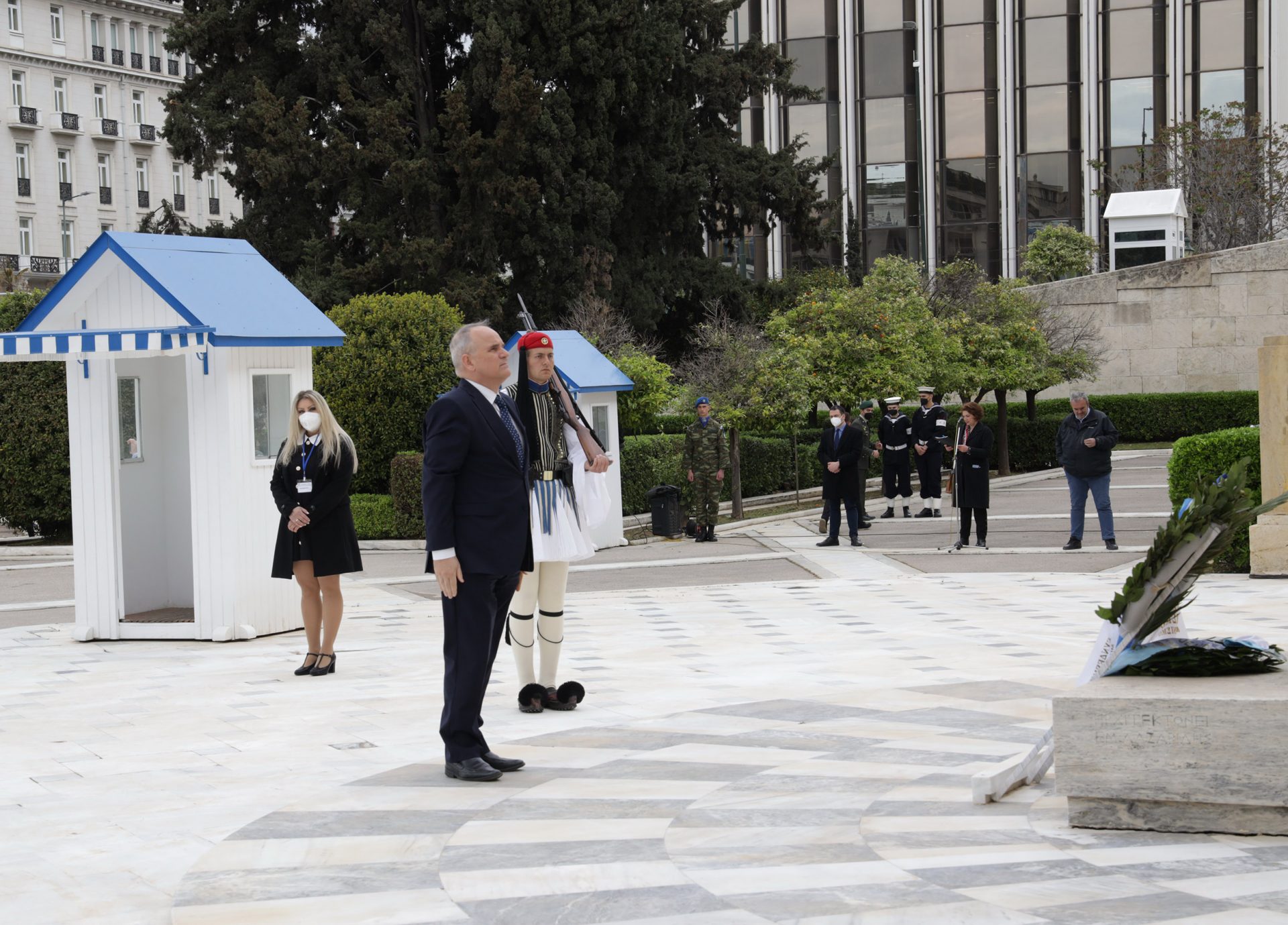 SHP and the Philhellenism Museum participated in the Memorial Prayer held at the Cathedral of Athens on April 19, 2022. Then a representative of SHP laid a wreath at the monument of the Unknown Soldier.

April 19, 2022 (anniversary of the death of Lord Byron in Messolonghi in 1824) has been established as the Day of Philhellenism and International Solidarity. Greece honors the thousands of Philhellenes who offered valuable services, even their lives for the liberation of Greece. 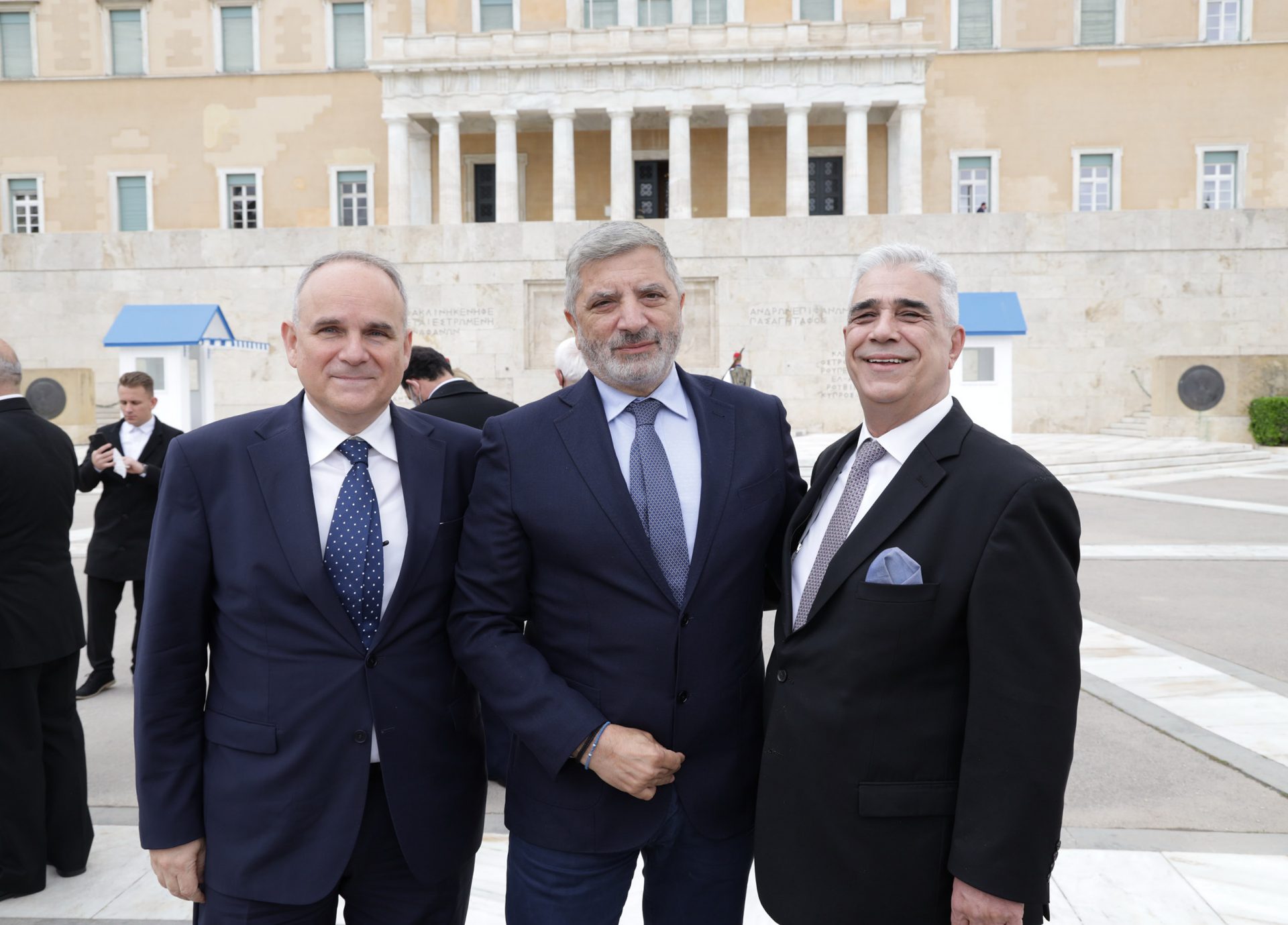 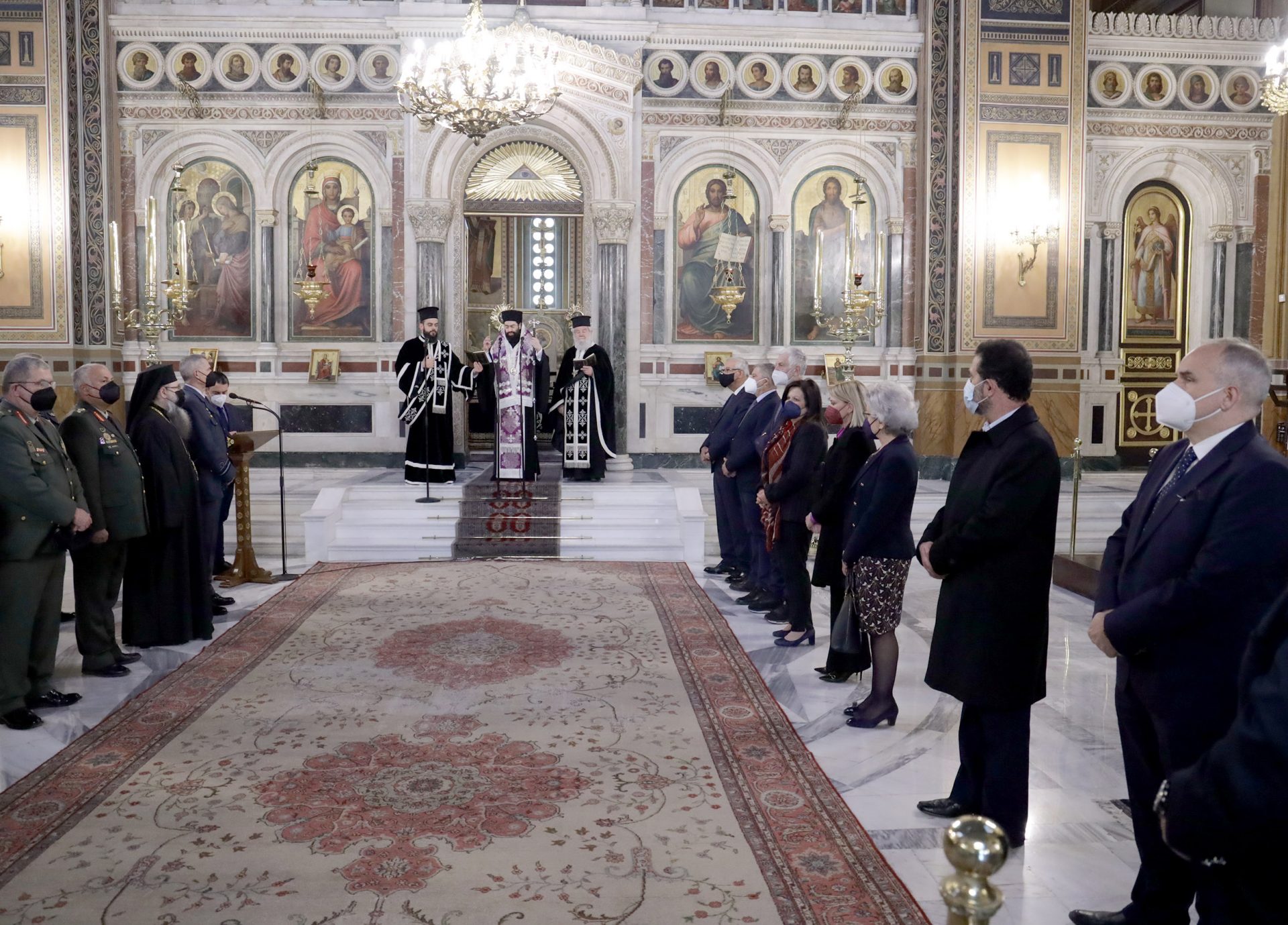 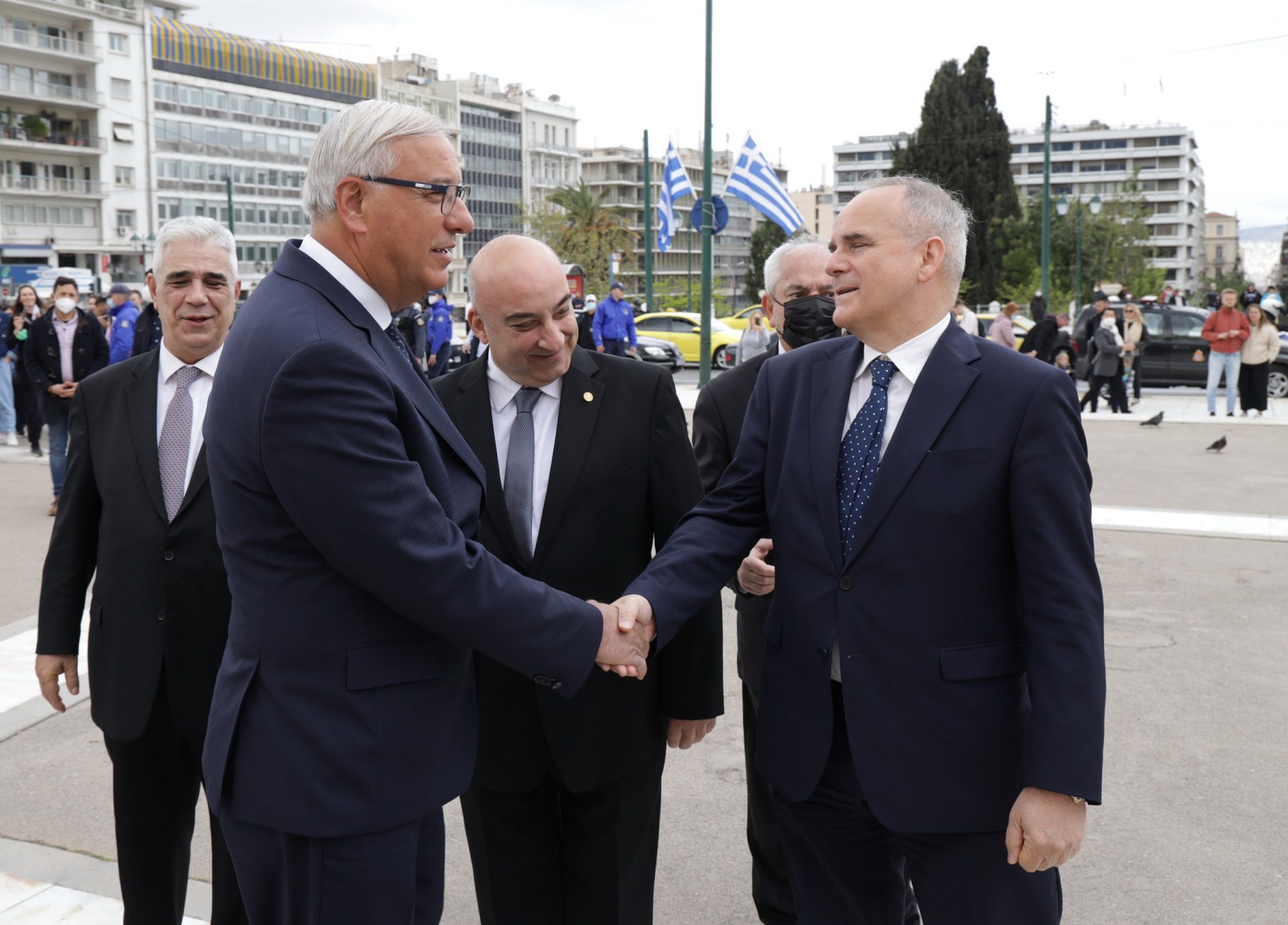 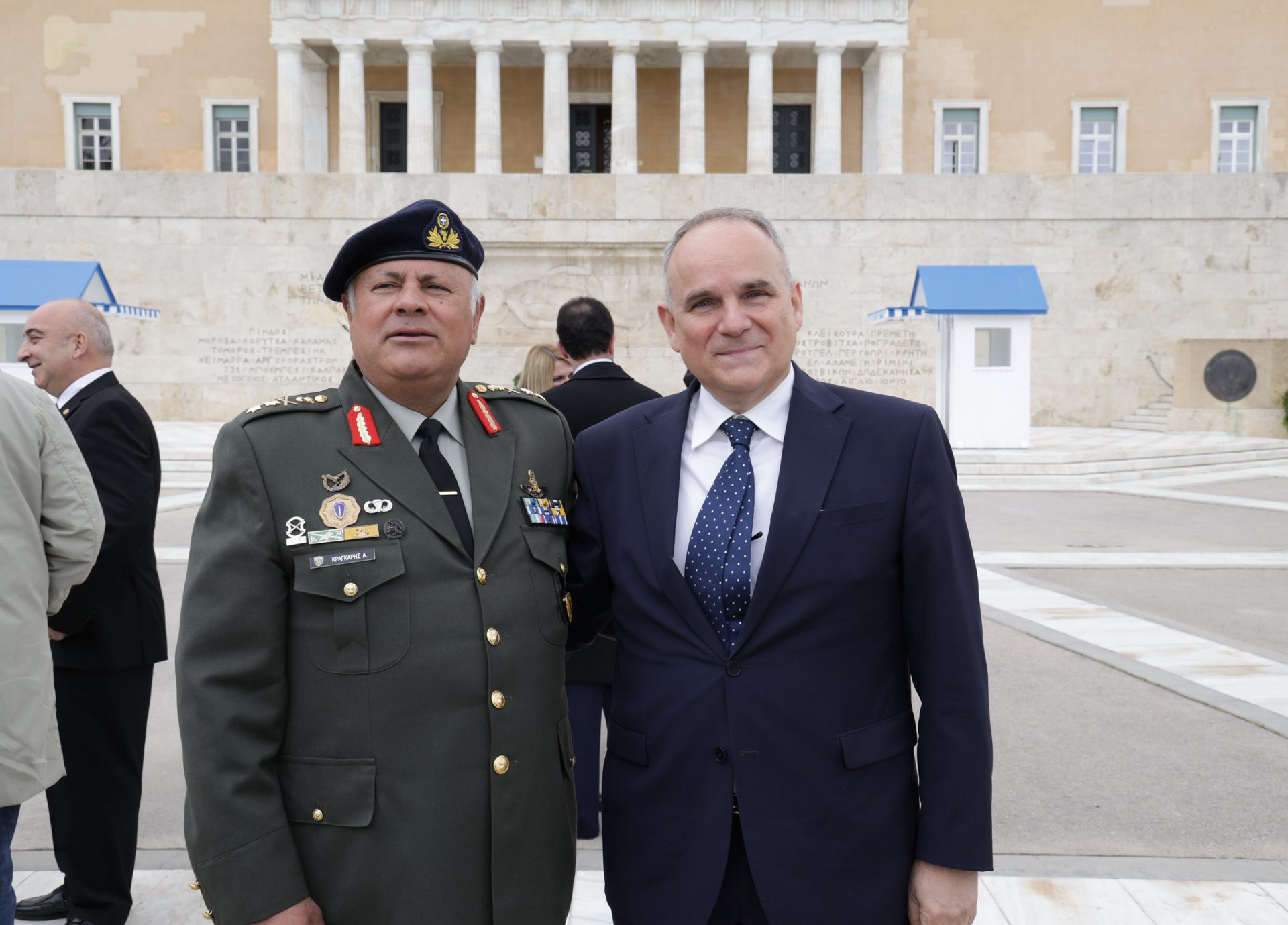 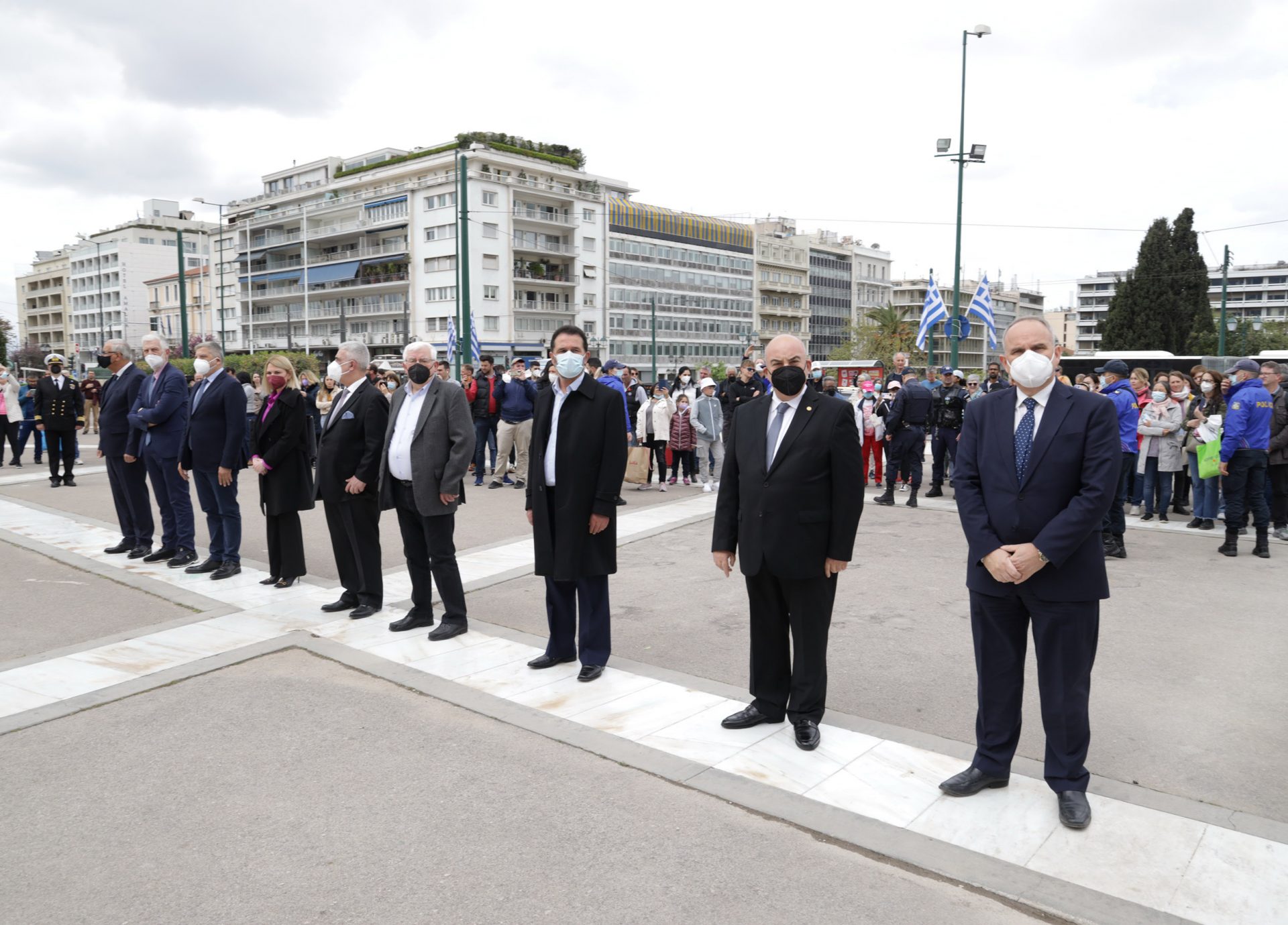 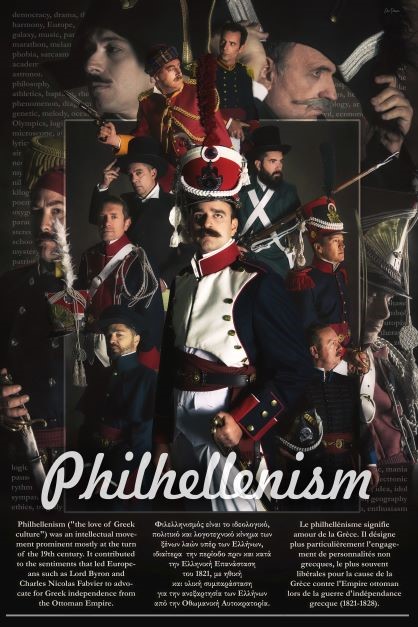 SHP and the Philhellenism Museum honor the thousands of Philhellenes who offered valuable services from Europe and the USA to Greece during the Greek War of Independence and fought for its freedom. In 1821, Philhellenism laid new foundations for human rights, international solidarity and turned Greece to a beacon of Western civilization.

On April 19, Greeks and Philhellenes honor the great romantic poet Lord Byron, who first envisioned that “Greece might still be free again” and the thousands of volunteers who sacrificed their lives on the battlefields and in the Greek seas.

The Philhellenism Museum has formed a group of enactors who wear the exact uniforms of Philhellenes of the time and carry their authentic weapons.

The uniforms and weapons are part of the Museum’s collection and are exhibited in it.

The photos are by the photographer Elias Pergantis.

Admission to the Museum is free.

Following a proposal by the Society for Hellenism and Philhellenism (SHP), the Bank of Greece issued a series of collectible coins, dedicated to the Philhellenes who fought and offered valuable services for the liberation of Greece.

The first silver coin is dedicated to Lord Byron and is presented on March 29, 2022.

This initiative strengthens the work of SHP for the promotion and perpetuation of Philhellenism. 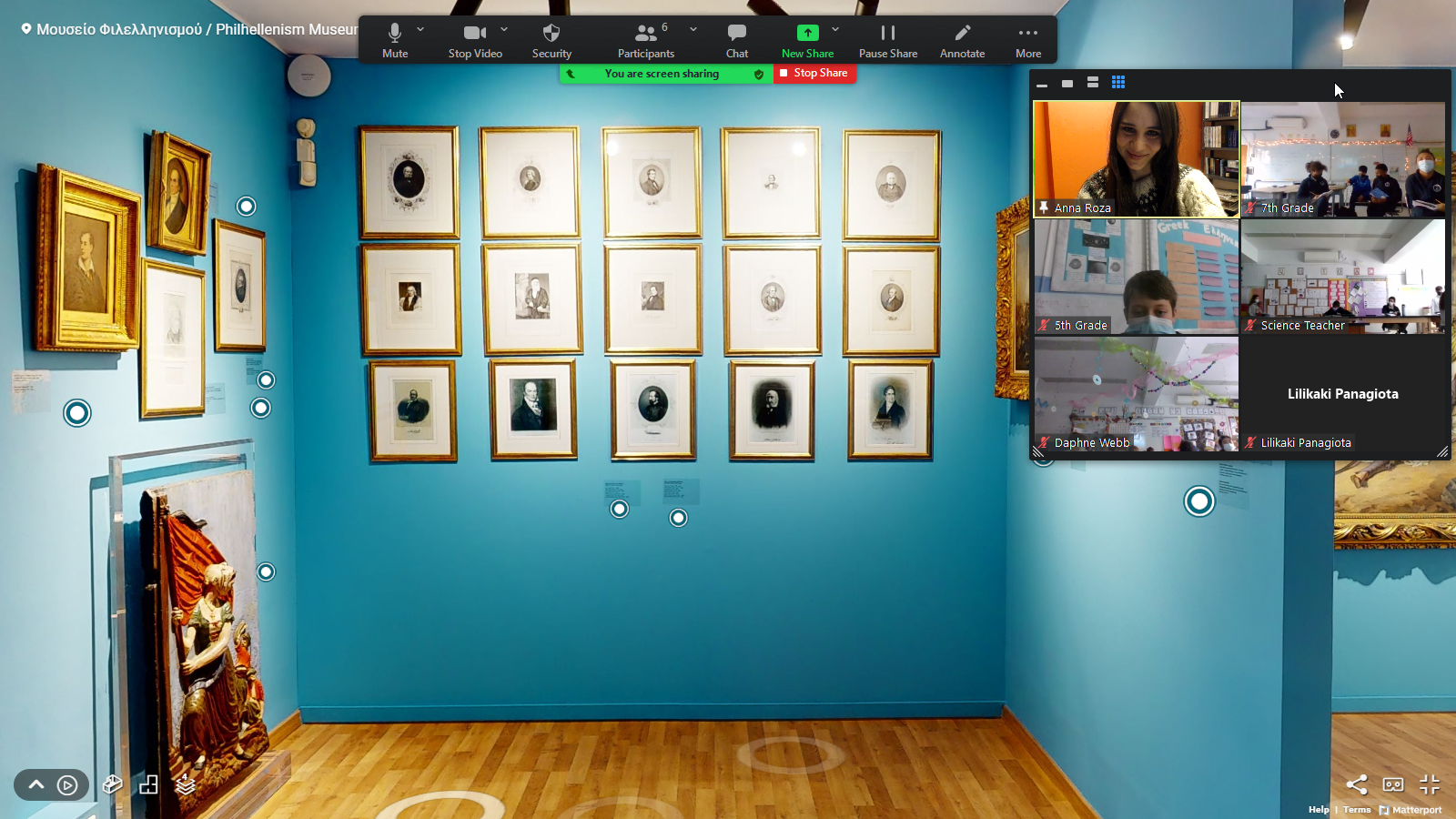 The Philhellenism Museum has launched an online tour program for schools and cultural institutions that are unable to visit the Museum due to pandemic restrictions and inability to move. More than 120 visits from all over Greece and abroad have already been planned.

The program also addresses the Greek schools of the Greek community and the guided tours are held in Greek, in French and in English.

In this context, the Philhellenism Museum welcomed online the students of the A. Fantis School of Saints Constantine and Helen in New York.

The students of the school had the opportunity to learn through a pleasant and educational interaction with the staff of the Museum the influence of Greek education and the values ​​of Greek culture in the arts, politics and social progress, as well as the evolution of Philhellenism since the Renaissance until today, and its contribution to the National Independence of Greece.

The visits to the Museum continue to take place both on site and virtually.