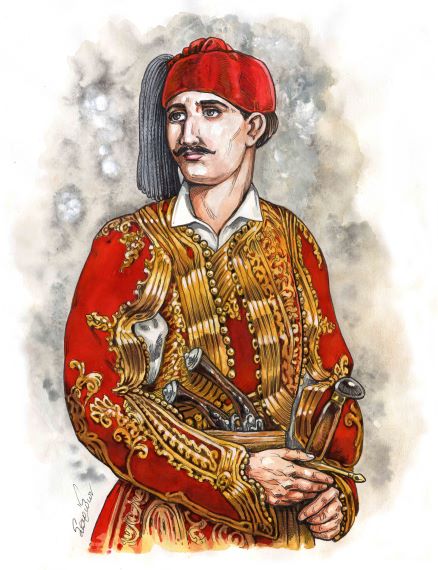 Studying the history of Greeks and Philhellenes who played a role during the Greek Revolution, it is difficult to identify among the great fighters, Greeks and Philhellenes, a heroic figure who loved Greece, identified with her cause and was present for so long and in so many fronts and battlefields, as George Jarvis.

George Jarvis (1797-1828), was born in Altona, Denmark. Today Altona is a suburb of Hamburg, Germany. But from 1640 to 1864, it was part of the Kingdom of Denmark. Jarvis’s father was Benjamin Jarvis, an American merchant from New York who was assigned Consul of the USA in Altona, Denmark. His mother was Maria Carolina Dede from Germany.

Jarvis had received a classical education, was a fan of Greek culture, and when the Greek Revolution broke out, he became an enthusiastic follower. He was influenced by the German Philhellenic movement, and had a keen interest as a student at the University where he was studying at Heidelberg. In 1821, he was already an educated young man who spoke English, French and German.

In November 1821 he decided to go to Greece. After a long and difficult voyage, he passed through Frankfurt, Zurich, Strasbourg, Lyon and finally, arrived in Marseilles, shortly after the departure of the ship carrying the German General Charles Norman and his battalion of Philhellenes to Greece. Shortly afterwards, he found another ship (the Swedish “Trondjem”) destined for Greece, arriving at Hydra on 3 April 1822. It is noteworthy that the same ship was transporting to Greece, another of the brave and emblematic Philhellenes, the Officer of the Royal Navy of the United Kingdom, Frank Abney Hastings. Jarvis was the first American philhellene to come to Greece since the beginning of the Greek Revolution.

When he arrived in Greece, he went to the government at Corinth, and enlisted in the Greek Navy, under Giacoumakis Tombazis and Antonis Rafael, captain of the Corvette “Themistocles”. He also developed a close friendship with Demetrios Voulgaris from Hydra (later Prime Minister of Greece) and the Greek merchant and member of the “Filiki Etairia”, Emmanuel Xenos. Xenos had bought a house in Nafplion, and had turned it into a meeting point for Greeks and Philhellenes. Jarvis’s first mission was to organize the combat capacity of ships. One of the first expeditions in which he participated with “Themistocles”, was to go to Chios at the time of the massacre and destruction of the island by the Turks, in order to seek and rescue fugitives from the island.

Jarvis writes in his diary: “On 9 May 1822, we went ashore again. A horrible appearance, the crops in excellent condition, the well-cultivated land, the horses, the goats and the sheep grazing, but no living soul. Four times we found a bunch of dead men and women. How seedy the coast, the gorges and the valleys were and how beautiful the view was! But here a corpse that was thrown over the rocks tied handcuffed and terribly mutilated, there another headless, almost still warm, over a dozen corpses that began to rot, and on the other side an even greater number of naked corpses, who had just lost their breath. A coats full of heads! ”

He participated with the Greek Navy in 13 naval battles and war operations.

Indeed, as he states in his diary, “as a Greek Navy officer, I spent two years with them in various operations in Chios, Mytilene, the coasts of Asia Minor, Syria, Crete, Cyprus, the Archipelago and the Peloponnese. Thirteen different campaigns with them, in which we burned several ships of the line, as well as smaller ones, confiscated others. We conquered and defended fortresses and gave every possible help to Christian refugees. The younger Greeks in many ways resemble their ancestors. The same people who fight like seafarers, when they come back are enrolled as soldiers on land. So I was present at the siege of Athens, Nafplio, the defense of Messolonghi and the battle with Hursit-Pasha in Morea.”

It is worth noting that the diary and letters of George Jarvis constitute an important historical source. Jarvis was a noble and honest man and his diary and letters contain facts and real information. While reading his diary, we note on a particular occasions, that he did not mention at all the fact that he was once severely wounded. From the first moment in Greece, Jarvis followed the Greek customs. He was wearing traditional Greek clothes, a foustanela and learned the modern Greek language quickly. Actually, he tutored other Philhellenes to learn Greek as well.

During his presence in Greece, he took action at sea and on land, and he was present in almost all the great battles and historical moments of the Greek War of Independence. Some of these cases are indicative.

In the summer of 1822 he participated in many conflicts between Greeks and Turks in the Argos region. In September 1822 he served in the Navy as a seaman with Hydra’s fleet and combats the Turkish fleet in the area of ​​Spetses. In December 1822, he went to Messolonghi and engaged in battles. In 1824 he returned to Messolonghi and served as an adjutant general to Lord Byron, where he took charge of the training of the Corps of Souliotes. After Byron’s death, Gamba entrusted Jarvis with the management of the artillery and of Byron’s assets and liabilities. Jarvis fulfilled these tasks with great responsibility. He paid the salaries of Byron’s soldiers, and distributed his assets with responsibility to the right recipients. 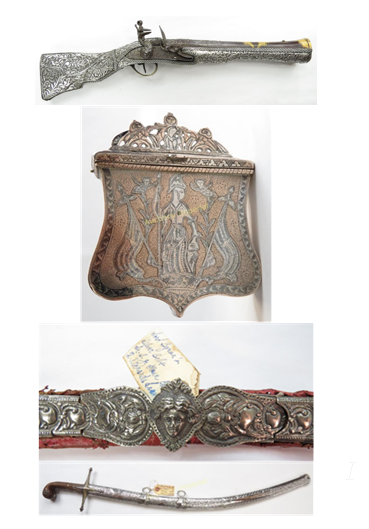 Personal objects of Lord Byron, which passed to George Jarvis and then to Samuel Howe, SHP Collection

We note here that Jarvis had adhered unconditionally to the correct position that all Greeks had to support the legitimate government, and that discipline and respect to the administration’s policies was essential for the success of the struggle. Jarvis avoided taking position in the frictions and grievances among the Greeks, which disappointed him, and remained loyal to the legitimate governor, who was Mavrokordatos, and to his choices. Even when he clashed with Odysseus Androutsos. It is important to note that Jarvis has never received for himself a salary or remuneration from the Greek government. He was disinterested and dedicated to Greece and to the Greeks in an exemplary manner, as few during the Greek Revolution. He was coaching and encouraging the soldiers and was always first in the battles, in which he was injured several times.

In Messolonghi, Jarvis, together with the engineer Kokkinis, participated in the fortification works of the city (and of Aetolikos) and took part in its second siege. In the autumn of 1824, during the campaign in Epirus, he remained fortified with 50 men on the front line at Kravasaras – Makrinoros, with the Greek army officer Karagiannis. On 26 October 1824, Jarvis signed with another 8 Greek chiefs a letter in which they promised not to abandon their post. This statement was published in the newspaper Hellenic Chronicles published by another great Philhellene, the Swiss Mayer, in Messolonghi.

Jarvis also offered later his services to Theodore Kolokotronis as a political adviser.

An incident that took place during a battle in Tripoli, demonstrates Jarvis’ bravery. After a raid, of the Turks, Jarvis was injured in the thigh. Unable to run, he was abandoned by other fighters and surrounded by the Turkish cavalry, who attempted to kill him with fury. However, refusing to give in, he turned around and pointed his rifle at anyone who approached him, threatening to shoot him. His bravery and heroism encouraged his comrades, who soon after, returned and rescued him.

Jarvis had now received the rank of Lieutenant General, and had formed a team of 45 fighters (all names are known), who were trained and paid at his own expense. With this Corps, he was always at the front line and took on the most difficult missions. He did the same when Ibrahim Pascha invaded the Peloponnese. At the battle of Neokastro, when the Greek forces retreated, Jarvis and his fighters were captured after a fierce battle. Ibrahim personally dealt with Jarvis, and tried to persuade him (talking to him for an hour in French) to move to his camp, offering him a large sum of money and a double salary to his fighters. They all refused and Jarvis was tortured and all his personal belongings were removed. A few days later 1000 Greeks, including Jarvis and his Corps, were released in a prisoner exchange agreement between the two camps. Jarvis arrived ill, injured and in a miserable state at the residence of his compatriot, Philhellene military doctor, Samuel Howe, who treated and cured him. Jarvis had suffered many injuries from his participation in the Greek struggle. But he had incredible physical strength and overcame injuries, deprivations and hardships. After this adventure, he was soon ready to take again action for Greece.

In the battle of Faliro, he fought with G. Karaiskakis and Nikitaras. On 25 October 1826, Karaiskakis began his expedition to Attica, accompanied by some of his friends, including George Jarvis and the German doctor Heinrich Treiber. Jarvis fought alongside Karaiskakis in Attica and Arachova and he was with him until his death, along with Treiber, who treated as a doctor Karaiskakis’ wounds.

Nikolaos Kassomoulis, refers to the Military Memories of the Greek Revolution (1821-1833) – Volume II, to Jarvis with the following comments: “Georgios Zervas (Jarvis), American, attached to Karaiskakis, honest young man, with education, excited to be with this Corps. He died in Argos. Indifferent in to our rivalries. He enjoyed everybody’s love.”

To the Greeks who accepted him affectionately, he was known as “Captain Georgis the American” or “Zervis” or “Zervas”.

From 1827 onwards, Jarvis undertook, in collaboration with another brave American Philhellene, Jonathan Peckam Miller, to organize the distribution of food, clothing, and medication aid sent by the Philhellenic Committees of the USA to the newly established Greek state.

The cause of his death is unclear. Other sources cite tetanus as a cause, others typhus. This is the most likely version, according to a letter of the Provincial Council of Argos dated 18 December 1828 to the Extraordinary Commissioner of Argolida, which states, “[…] his illness, that is, as a result of information received by doctors, typhus”.  The state’s General Gazette wrote that he died of illness and that he was buried with the honors of a General.

What matters, is that a great and noble hero offered his life to Greece and to the struggle for its independence. Two years after Jarvis’s death, his relatives asked to dispose of the property he had left in Greece. They set themselves as a precondition the settlement of any possible financial debt that Jarvis could have left. Thus, they published a notice to the press, inviting anyone who had a claim to present any evidence he had to the “appointed arbitrator on the account of missing person”.

This attitude of unique decency, honesty and morality, shows the quality of the family environment that had shaped the character of this great man, the hero who sacrificed his fortune, his career, and his life in the struggle for the Independence of Greece.

“Remember me! My friends,

Who here from freedom’s cause remains,

In Grecian seas, in Grecian plains,

To break the most inglorious chains,

The Philhellenes on Google Maps
Scroll to top