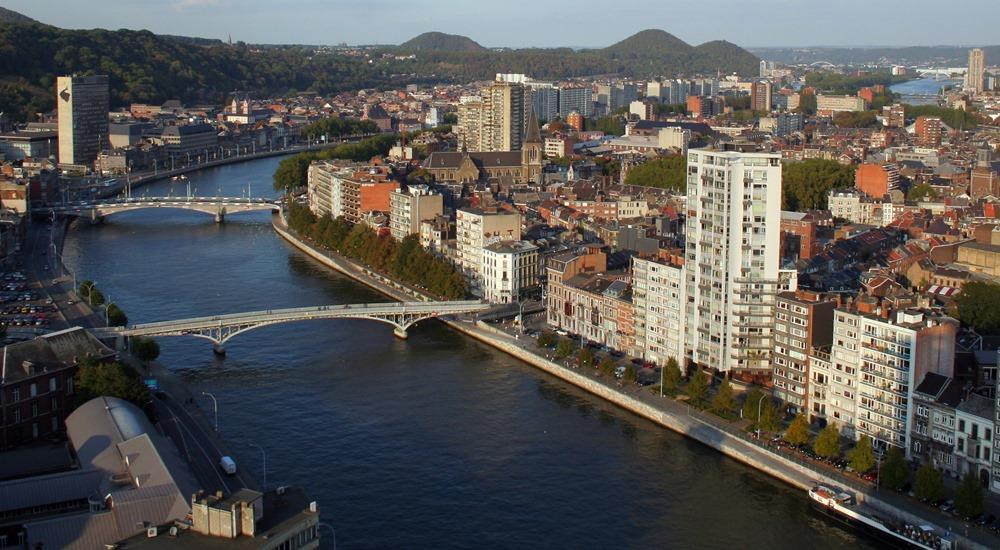 Resumé: Since medieval times the city of Liège in Belgium has been a centre of armament manufacturers. After the French period that lasted until the fall of Napoleon in 1814-1815, the Dutch King William I of Orange-Nassau invested heavily in the metal and weapon industry of the former Prince-Bishopric of Liège. Officially neutral in the Greek conflict, the government formally denied, and claimed to prevent, the exports of arms to the Greek insurgents, carefully protecting its Ottoman market. Initially commercial motives prevailed among all manufacturers, but soon, inspired by the Greek struggle for Freedom, Belgian nationalism also grew in Liège, facilitating weapon deals to Greece.[1]

“My friend,” said the child, the Greek child with blue eyes,

In one of his Philhellenic verses, Victor Hugo, the best-known French author of the era, stages a child who desires weapons more than toys. More than a poetic or romantic myth, the history of Philhellenism also tells the story of economic gain and human loss.

By the end of the eighteenth century, the city of Liège hosted seventy to eighty manufacturers of weaponry, exporting pistols, guns, cannons, knives, bayonets, ammunition, flints, powder and uniforms, mainly to France.

Once in power of the United Kingdom of the Netherlands,  comprising todays Kingdoms of Belgium and the Netherlands and the Grand Duchy of Luxemburg, the business minded Dutch King William I of Orange-Nassau invested heavily in the industries of the southern provinces: in the textile industry in Ghent in Flandres and in the metal and the weapon-industry of Liège. Another key of his policy was the promotion of exports.

In 1823, the Dutch Chargé d’affaires in Constantinople, Gaspar Testa, informed his home office that a Dutch ship, le Brisier under Captain Piet Bakker, had sailed to Milo(s) with a cargo of weapons sent by Stephano Paleologo(s) to the Greek insurgents in the Peloponnese. Together with that other Greek merchant in Amsterdam, George Tomasachi (Tomazinos), he already played a pivotal role in the support of the Greek cause. As a matter of fact, Paleologo had sent donations from the Greek committees in Amsterdam and Londen to his family, the Xeno’s linked to the leadership in Hydra. This particular arms deal reported by the Dutch envoy,  however, alerted the central government, emphasising its neutrality.

Obviously this didn’t prevent King William I to further develop the trade with the “East” and the “Black Sea”. One of his representatives, Jean-Baptiste De Lescluze, a trader from Bruges and President of the Chamber of Commerce in Ostend, travelled to the region between 1821 and 1825.  Unknown to the public but confirmed by Dutch diplomatic archives, it also appears that a manufacturer of Liège, D. D. Ancion and Co, had signed a profitable contract of three years with the Ottoman Court. The goods passed through a trading house in Amsterdam, Sigritt. By the end of 1824, so the Dutch envoy reports, the first orders had arrived. The Ottoman market was so lucrative that other arms manufactures from Liège, Philippe-Joseph and his brother Louis (Jean-Louis) Malherbe, also approached the Dutch envoy in Constantinople, after their introduction to the Ottomans by Jean-Baptiste De Lescluze had failed. His commercial mission to the court, indeed, had been aborted in 1821. Sailing to Athens instead, he had sold some of the weapons he carried to the insurgents. When later that rumour circulated in Constantinople, it was strongly denied.[3] 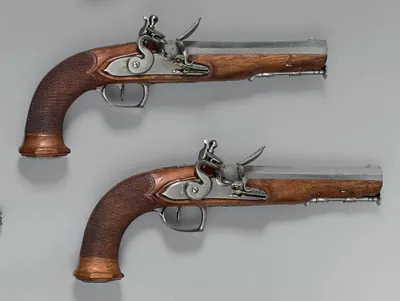 While the King and his Government scrupulously protected their commercial interests in the Ottoman market, the Greek cause had started to stir the minds of the people.

In 1972, the Belgian academic Lutgard Wagner-Heidendal unveiled that the Malherbes, mentioned above, were members of the masonic lodge La Parfaite Intelligence, one of the major catalysers of the Greek Committee of Liège. It also appears that the Committee approached committees elsewhere in Europe with the suggestion of providing weapons against donations. With the contributions they had raised in two successful concerts and some other events in Liège, a cargo of weapons manufactured by Mathieu-Joseph Malherbe de Goffontaine had been shipped to Greece in July 1826, as proven by Wagner-Heidendal. 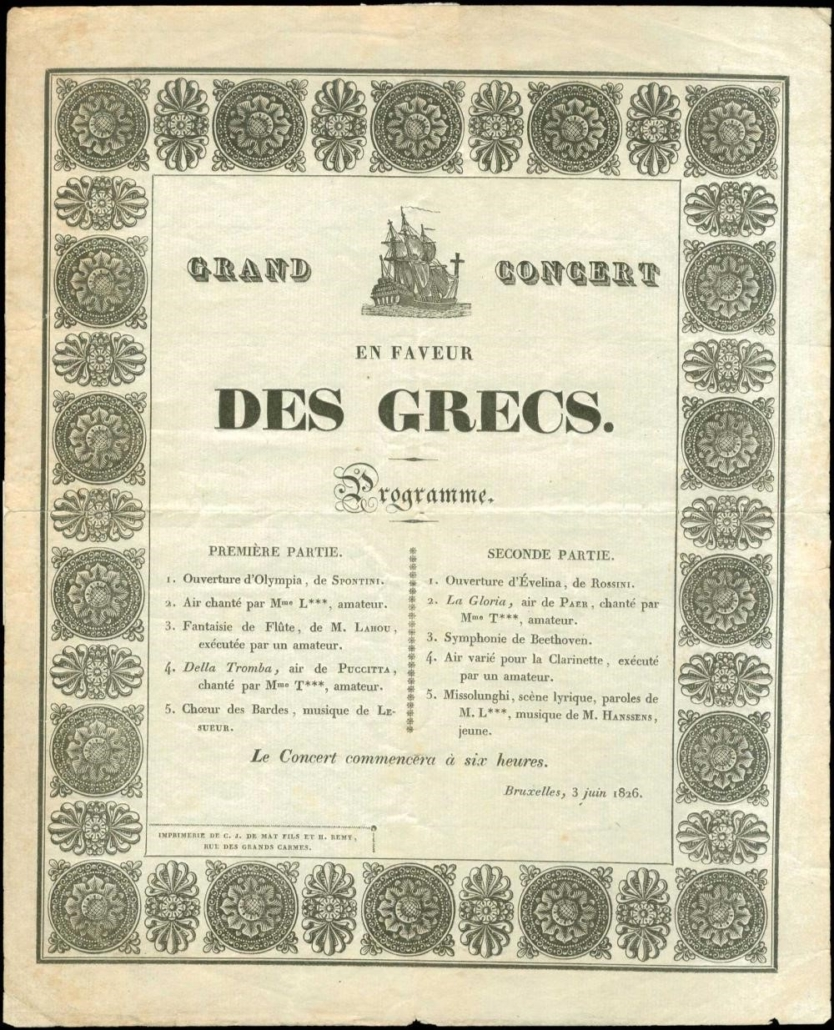 The program of June 3, 1826, of one of the many concerts that took place in favor of the Greeks in Europe. The aim of these events was to raise money for the financial support of the Greeks, and to promote the rights of Greece (Philhellenism Museum / SHP collection).

More details about that shipment stem from a letter, recently rediscovered by the author, in which Nestor Aron announces the imminent departure of La Jeune Emilie with 43 Philhellenes under the command of Raybaud and a cargo of: “4,000 boxes of biscuits, 500 rifles from the city of Liège, 30000 (x) of gun powder, flints, trousers and medical supplies”.[4]

For diplomatic and political reasons, the Government officially denied the weapon trade with Greek insurgents. We can only guess in how far it tolerated or monitored the deals, as did the French and Italian authorities when shipments passed through Marseille or Livorno. Studying the matter, a former Greek Consul in Liège only discovered one small piece of papier, half burned, unsigned and dated 1826, in a private collection outside Liège. The snippet is a rare illustration of the secrecy but also reflects an honest bargain with reasonable prices, so he concluded. 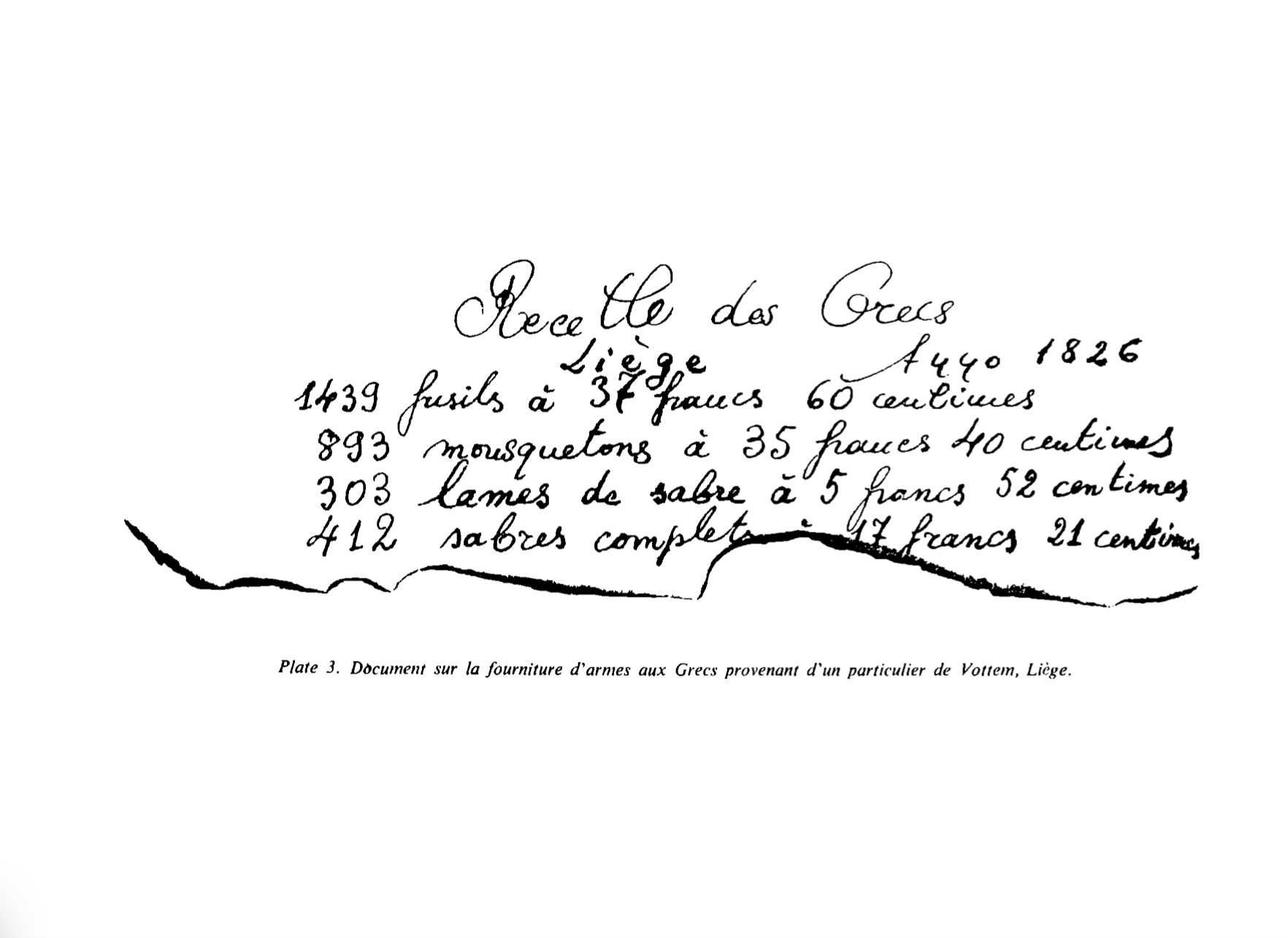 List of a shipment of weapons sent to Greece in 1826

Killing two birds with one stone (pun intended), a section of Liège’s industrials and elite made the transition from commercial interests to political involvement, undermining the policy of the Dutch occupation, as an omen of its complicity in the Belgian revolution in 1830.

[1] For this introductory article the author relied on three sources: 1) the exhaustive but forgotten study in Dutch by Lutgard Wagner-Heidendal: Philhellenism in the Kingdom of the Netherlands, published in 1972 by the Royal Academy for Science, Literature and Arts of Belgium; 2) a short article in French by Efstratios Mavroudis, a former Greek Consul in Liège: Relations de Liège avec l’insurrection Hellénique La Presse – La Fourniture d’armes (no further references, with the illustration, assessed here: https://ojs.lib.uom.gr/index.php/BalkanStudies/article/viewFile/887/895 ), and 3) B. van de Walle, J.B. De Lescluze, in: Handelingen van het Genootschap voor Geschiedenis, Brugge, 1959, p. 76-88, 1960, p. 154-188.

[2] Closing verses of the poem The Greek Child from Victor Hugo’s Les Orientales, as translated by G.B.: in: The Metropolitan Magazine, Volume 36, Saunders and Otley, 1843, p. 375.

[3] The story of Jean-Baptiste De Lescluze who saved the lives of at least 1100 Greeks who fled the occupation of Athens in 1821 by evacuating them from Pireaus to Salamina, and his offer to negotiate a commercial treaty with Ypsilanti surely merit a separate article.

[4] Recently rediscovered letters addressed to a Belgian Philhellene, (to be published here soon).

PRESS RELEASE – The Philhellenism Museum is open to the public

African-Americans and the Greek Revolution
Scroll to top