The Society for Hellenism and Philhellenism participated in the event of the erection of the Memorial for the American Philhellene Dr. Samuel Gridley Howe in Aegina.

The event was held with great success on Monday 15 April 2019 in Aegina, which honored the great American Philhellene Dr. Samuel Gridley Howe, the humanitarian doctor who offered his medical services and also fought alongside the 1821 Greek freedom fighters.

At the time of the establishment of the modern Greek state, Dr. Howe brought a large sum of money through the US, and made it available to alleviate the Greek refugees. In agreement with the first Governor of Greece, the port of Aegina (the first capital of the newly established Greek state), was reconstructed from this money, to stimulate the economic activity of the country.

The unveiling was made by US Ambassador Geoffrey R. Pyatt and Mayor of Aegina Dimitris Mourtzis. The Mayor’s and Ambassador’s greetings were preceded by the presentation of a letter sent by Dr. Howe’s descendants, made by Mr. Constantinos Velentzas, President of the EUROPEAN DYNAMICS group, and a speech by Mr. Vasilis Sotirakopoulos on Dr. Howe’s action in Aegina.

The monument, a relief bust of the great Philhellene, was set up at the harbor pier, at the initiative of the Port Authority of Aegina, Mr. Sotirakopoulos and the Association of Friends of the Historical and Folklore Museum. 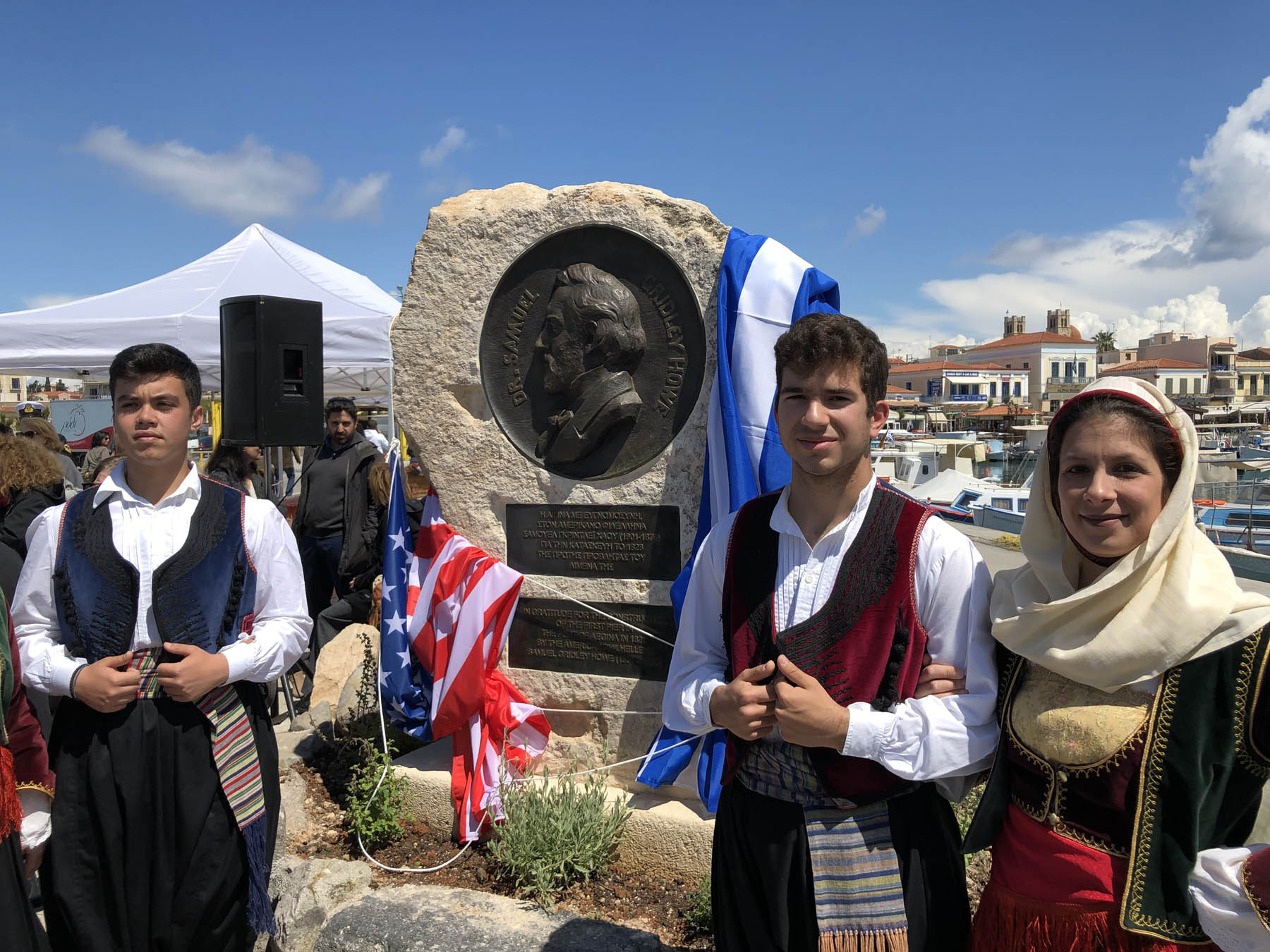 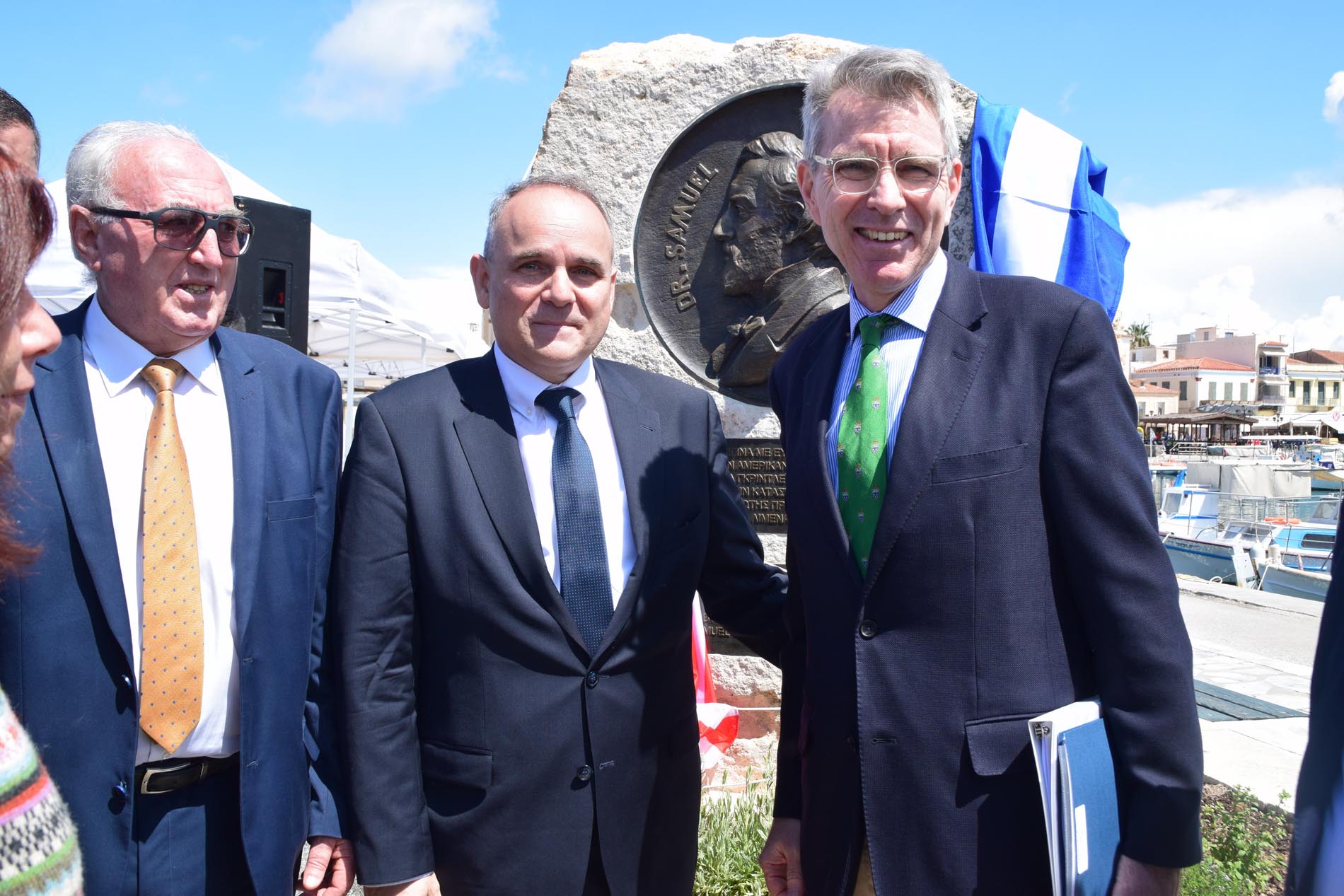 The American people were instrumental in growing the philhellenic movement internationally, and Philhellenism marked intensively the political, social and academic life in the United States of the 1820s, leading to a “Greek fever”. Many philhellenes worked for the cause of Greece in America, raised and repeatedly sent money and help, while others actively participated in the Greek war of independence.

Dr Samuel Gridley Howe was undoubtedly the most important American philhellene. Τhe history of this great man, and the broader context of his time, are indeed remarkable.

Dr. Samuel Gridley Howe (1801 – 1876) studied medicine at Harvard and Brown in Boston. His admiration for Lord Byron and Greek culture, but also the work of the American philhellenic committees, led him to travel to Greece in 1824 and offer important services to the Greek people.

The philhellenic movement starts when an important philhellene American academic and politician, Edward Everett promoted in the USA the appeal sent in March 1821 by Mavromichalis and the Messinian Senate in Greece, to the American people.

The dynamics of the philhellenic movement and the support of Edward Everett pushed Dr. Howe in 1824 to travel to Greece, shortly after his friend Jonathan Peckam Miller. In Greece, Dr. Howe took part in the war of independence, as a military doctor in the first line both in the battlefield, and during naval operations. Later he was appointed doctor of the flagship of the Greek fleet (Karteria) and coordinator of all the naval doctors. His ability as a commander and his valor, gave to him the euphemistical title of “Lafayette of the Greek war of independence”. Dr. Howe supported the philhellenic movement in the USA sending often letters to the philhellenic committees and the press in America, but also with his literary work which constitutes an important historical source. Dr. Howe organized and managed hospitals in Poros and in Nafplio. He designed an advanced military medical logistics system, which included first medical assistance units in the battlefield and a plan to send the wounded to organised hospitals.

Georges Jarvis arrived in Hydra in 1822 and joined the navy. He participated in 13 battles with Tombazis and Miaoulis. Then he went to Missolonghi where he was adjutant of Lord Byron and trainer of the elite corps of Souliotes. After the death of Byron he took command of this corps and directed the works to fortify Messolonghi with the engineer Cussings.

Georges Jarvis kept the personal belongings of Byron. After the death of Jarvis in 1828, these objects passed to Dr. Howe and they now form part of the collections of the Society. The emblematic helmet of Lord Byron was donated by the youngest daughter of Dr. Howe in 1926 to the Museum of History of Athens, Greece.

Howe, Jarvis and Miller never accepted a financial compensation from the Greek government. They lived with incredible privations and hardships. Howe describes in his notes their marches during military campaigns in the mountains, where he was carrying his gun, a sword (yatagan), two pistols in his belt, and a big bag with his medical tools. They often stayed sleeplessness for days, eating weeds and snails in the mountains, sleeping on the ground covered only with a blanket-cape. Howe informed in a letter his father that only during one night in the course of a battle, he made, working hard, so many surgeries, that he would require years to accomplish in America.

Jarvis was appointed colonel. He was financing a group of 50 elite soldiers who fought bravely in many battles. When Ibrahim Pascha arrived in the Peloponnese, Jarvis and Howe volunteered to go to the front line in Messinia. After intense fights, Ibrahim defeated the Greeks. Howe succeeded to escape, but Jarvis was captured prisoner with 1000 other Greeks. Ibrahim offered to Jarvis $ 100 per month fee and double salary for his soldiers to change side. They all denied the offer. Dr. Howe writes in his diary that Jarvis and his men were freed during a prisoner swap.

Jarvis received the rank of Lieutenant General and continued his campaign with Kolokotronis and then Karaiskakis. In the battle of Faliron, he fought on the side of Karaiskakis and stayed next to him until Karaiskakis’ death.

After the battle of Navarino the Greek government asked Dr. Howe to return briefly to America to present the situation in Greece. While in America Dr. Howe worked feverishly to reactivate the philhellenic movement. He wrote a book on the Greek war of independence which became a best seller, second in sales after Byron’s Child Harold. Howe toured all States and collected large amounts of money which financed eight ship cargos of aid with clothing and food for the Greeks. This is the largest aid received by Greece from abroad at that time. Howe returned to Greece and managed in an exemplary manner the distribution of the aid.

At the same time Howe selected a group of about 700 refugees, and paid them on his own for months to build the port in Aegina (capital of Greece at that time). Capodistrias donated to Dr. Howe 10,000 acres in Examilia of Corinth, where Dr. Howe organized a standard agricultural community named Washingtonia. Dr. Howe brought in this camp and housed 200 refugees, and hired 200 workers. He also founded an orphanage and a school.

King Othon awarded to Dr. Howe the Cross of the Order of the Savior / Redeemer.

In 1831 Howe returned to Boston and founded the first school for the blind in the United States, and directed it for 30 years. His work was continued by the husband of his daughter, Michael Anagnos (a Greek from Papigo, Epirus). In 1848 Dr. Howe founded a similar school for people with mental disorders.

Howe’s love for Greece continued and so he returned back again during the Cretan Revolution 1866 / 1867. This time he brought with him his wife and two daughters.

In order to place this revolution in its international context, one can remind the work of Jules Verne. At that time Jules Verne wrote his famous work “20,000 leagues under the sea”, which became a best seller internationally. In this work Captain Nemo has found a huge treasure (1000 kg of gold), and brought it to the Mediterranean. When the Nautilus reached the coast of Crete, he delivered the treasure to the Cretans to support their struggle. Jules Verne also presents in his cabin in the Nautilus paintings with the emblematic figures of Washington, Lincoln and Botsaris.

Nemo never arrived in Crete. However, Dr. Howe and the European squadron of the US Navy (now known as the 6th Fleet) were there and their help to the Cretan population was decisive.

Dr Howe raised large amounts of money and brought again a valuable aid to the refugees during the Cretan Revolution. Indeed, he visited Crete taking a serious risk, and organized a food and clothing distribution center for the refugees.

Dr. Howe was a great philhellene, but also an intellectual, a scholar, a scientist, a philanthropist, a humanist, an opponent of slavery and a freedom fighter. A very popular American poet, John Greenleaf Whittier, presents the story of Dr. Howe in a beautiful poem entitled “the hero”, attributing a well-deserved title to this great man.

American Philhellenism continued to grow throughout the 19th and 20th century. To illustrate the duration of the spirit of philhellenism, we very indicatively refer to a letter of 1891 by General and member of Congress, William Rosecrans, who identifies with the hero Marcos Botsaris from the emblematic poem of the 19th century by Fitz-Greene Halleck.

The same spirit encouraged Americans and Greek Americans philhellenes to come to Greece and participate as volunteers in the war of 1912-1913, as part of a corps of the Greek army, bearing an American war-flag.

Howe, Jarvis, Miller and all the pure, idealists and selfless young men who fought and even sacrificed in 1821, continue to inspire with their work the Greeks at all levels and deserve special honors. 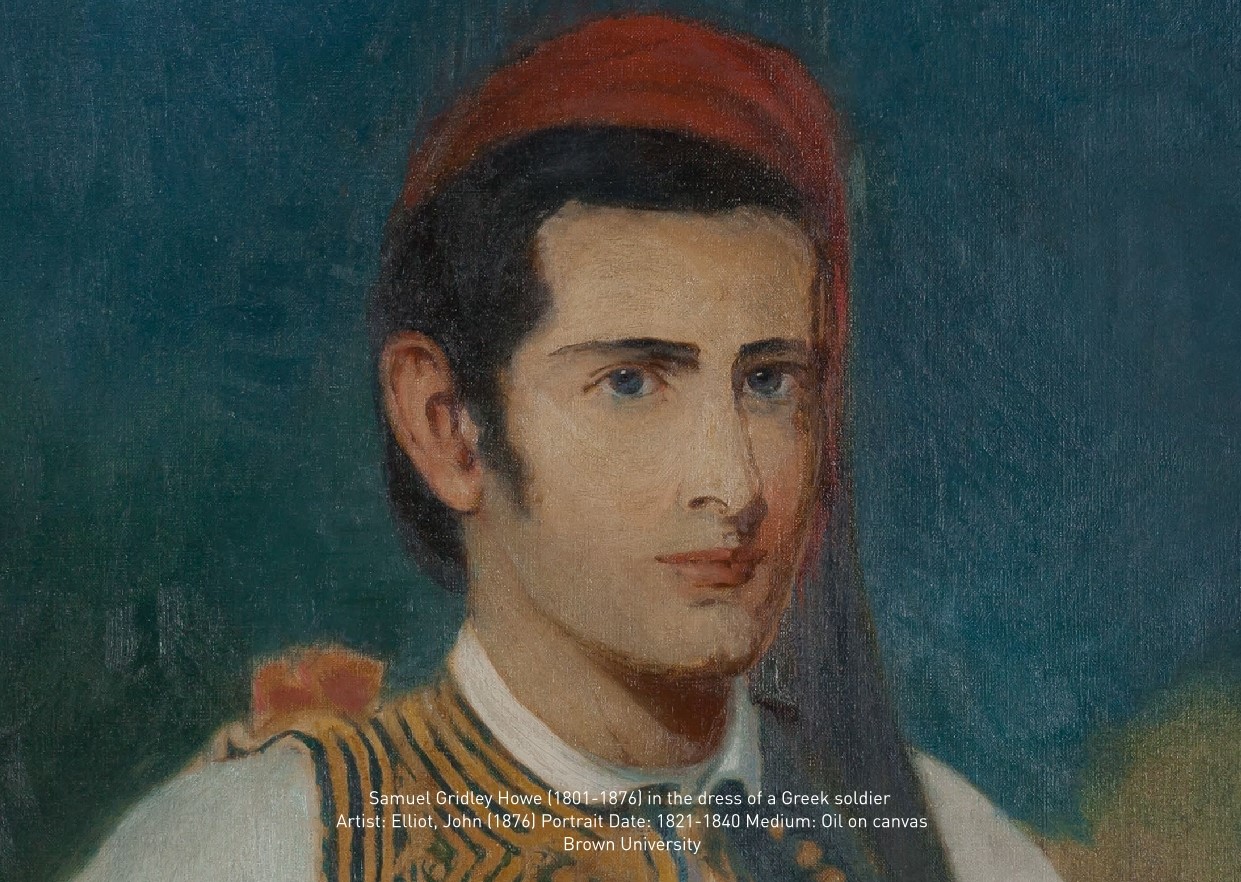