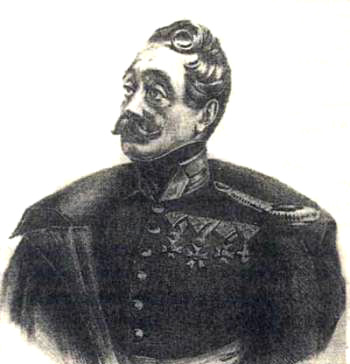 Colonel Auguste Hilarion Touret was one of the noblest figures of a philhellene.

Hilarion Touret was born in the city of Sarguémines, France in 1797. On 22 September 1811, he enlisted in the French army of the First Empire as a volunteer in the 2nd Regiment of Hussars. He received one after the other all the ranks of the military hierarchy to become on 9 January 1822 a Lieutenant. He served under the orders of Colonel Pellion, who later served as commander of the Greek Regular Cavalry, and participated in the campaigns of Prussia and Saxony in 1813, France in 1814, and Belgium in 1815.

During Napoleon’s war operations, he rescued the Cavalry General, Nansouty, and three of his officers. For this brave act he was bestowed by the medal of the Legion of Honor. Then, in the battle at Arcis-sur-Aube, Touret was injured in his right hand. In 1823 he participated in the Spanish campaign as an adjutant of General Bruny. For his participation in this campaign, he was honored with the medal of the Order of St. Ferdinand.

Then he returned to his homeland, and got excited by the struggle for the independence of Greece. He resigned from the French army on 8 November 1825, and prepared his trip to Greece. He reached his destination on 9 September 1826.

He received the rank of Major in the Greek Regular Army on 9 October 1826 and was placed under the command of Ioannis Kolettis. He participated in the campaign that the latter organized at Atalanti on 18 November 1826, in charge of 50 men. In February 1827 he came under the orders of Charles Fabvier, and took part in the campaign of Faliro. He developed a close relationship of mutual appreciation with Fabvier. Indeed, when Fabvier died, Touret delivered the funeral speech in Nafplion in September 1855.

After the bloody slaughter at the Three Towers of Attiki, Touret gathered what was left of the Regular Corps, and returned with the survivors to the camp of Taktikoupolis at Methana. On 11 August 1927 he was placed in charge of the 2nd company of cavalry. He took part in the campaign in Chios and was distinguished during the battle of Tourloti on 11 January 1828. In 24 January 1828, the army commander Fabvier praised him and his fellow cavalry men in writing for their very good conduct with extremely flattering words.

Touret then worked to reorganize the cavalry in Argos under the command of Carl Wilhelm Freiherr von Heideck, who replaced Fabvier when he left for France. Governor Kapodistrias recognized Touret’s services, and honored him with the rank of Cavalry captain further to a recommendation by the Commander of the Greek Regular Corps, General Trézel.

After the assassination of Kapodistrias, Touret moved with General Gerard and General Pellion in Methoni, and resided at the Headquarters of the French Expedition in Morea. From 1832 until 1845, Touret lived in Nafplio, where he was the soul of the city’s Catholic community.

In 1832 he undertook to reorganize the Hellenic Cavalry upon a relevant mandate by the Greek Government. Despite lack of means, he was able to assemble a body of 150 Cavalry men in January 1833, most of whom were pedestrians because of a lack of horses. A cavalry regiment of six companies was soon organized. On 5 April 1836, Touret assumed command of the Guard of Nafplion. Shortly afterwards, on 25 January 1841, he received the rank of Lieutenant Colonel.

Touret undertook early actions for the Greek government to honor the Philhellenes. Thus, with his intervention, for example, the city of Athens gave the name of Fabvier to a street in the capital. Moreover, Touret conceived the idea of ​​building a monument dedicated to the memory of the Philhellenes who died for Greece. This project was supported and honored in autobiographic letters, by most of the prominent leaders of Europe, as well as by the Greek Assembly. The monument, known as the “Touret Arch”, was made of wood at the expense of Touret in 1841, and adorns the inner side of the entrance to the Catholic Church of Nafplion. It has a facade with the shape of an ancient Greek temple and its columns bear the names of 276 Philhellenes and the place of their death, while on the pediment there is the shield and the crown of King Othon inside the cross of the Philhellenes fighters.

In 1845, Touret settled permanently in Athens, where he assumed the duties of King Othon’s adjutant. During his stay there, he was promoted to the rank of Colonel, and served consecutively as the head of the King’s court, Director of the Military Hospital and Chief of the Army’s Administration. On 1 November 1854, he was appointed in charge of the Guard of Athens. Touret was tireless, working hard for the Guard, and to ensure peace and security in the city. That same year, he undertook the foundation and administration of a company of firefighters who offered valuable services to the city. Touret organized the first Fire Corps of Athens. He based the structure on French standards. Indeed, the brass helmet worn by Greek firefighters up-to-date comes from what was originally designed by Touret. A few years earlier, he contributed to the construction of the road leading to the Acropolis, which made him an honorary member of the Archaeological Society of Athens.

In 1830 he married in Argos a lady of Italian descent, Maria-Teresa Pelloni. His wedding was attended by General Gerard and his marriage witnesses, Colonels Pellion and Pauzié.

Colonel Touret was an officer of many abilities, something which was reflected by his handsome appearance and his uniform. Babis Anninos sketches him and refers to his personality, as perceived by Gustave Flaubert (who visited him during his stay in Greece) and Edmond About, who recognized his special character. Full of humility, committed to the homeland and its institutions, he enjoyed a general appreciation and devotion.

Touret was honored with the Cross of the Knight of the Legion of Honor from France, and with a Spanish medal. He then received the silver medal of Greek Independence, which was the highest honor for Greeks and Philhellenes, and a proof of their participation in war operations during the Greek Revolution. King Othon honored him with the Golden Cross of the Knights of the Order of the Redeemer on 20 March 1838 and the Golden Cross of the Commander of the same Order on 20 March 1857. On this day he departed from Greece for France, to receive treatment at a French hospital.

Touret remained loyal to Greece, telling French doctors, who advised him to extend his stay in France until his health was restored: “If I have to die, I want to leave my last breath in Greece.” In fact, his wish was realized on 16/28 August 1857, arriving by boat in the port of Piraeus. At the moment when the steamer that brought him back to Greece from France was anchored, Touret died next to his wife, facing Salamis and Faliro, where he had fought for his beloved second country. During his last stay in France, he had the honor of being accepted by the French royal couple as a confirmation of the recognition he also enjoyed in France.

Nike untying her sandal, is a sculpture of the 5th century BC, from the parapet of the temple of Nike (goddess Victory) on the Acropolis. Georgios Vroutos (1843-1908) complemented the ancient sculpture and revived it in its original beauty.

SHP, in cooperation with its sponsor EUROPEAN DYNAMICS, offered as part of its social responsibility actions, 100.000 Euros to the Ministry of National Defense in Greece, to support its actions against the COVID-19 epidemic. It is reminded that the NIMITS Hospital is one of the reference points for the treatment of patients infected with the COVID-19 virus.

At the same time, SHP congratulates two other organisations which sponsored the activities of SHP in the past.

The Captain Vassilis & Carmen Constantakopoulos Foundation, and the Athanasios and Marina Martinou Foundation, which included in their important social responsibility plans, the financing of actions to face the COVID-19 epidemic.