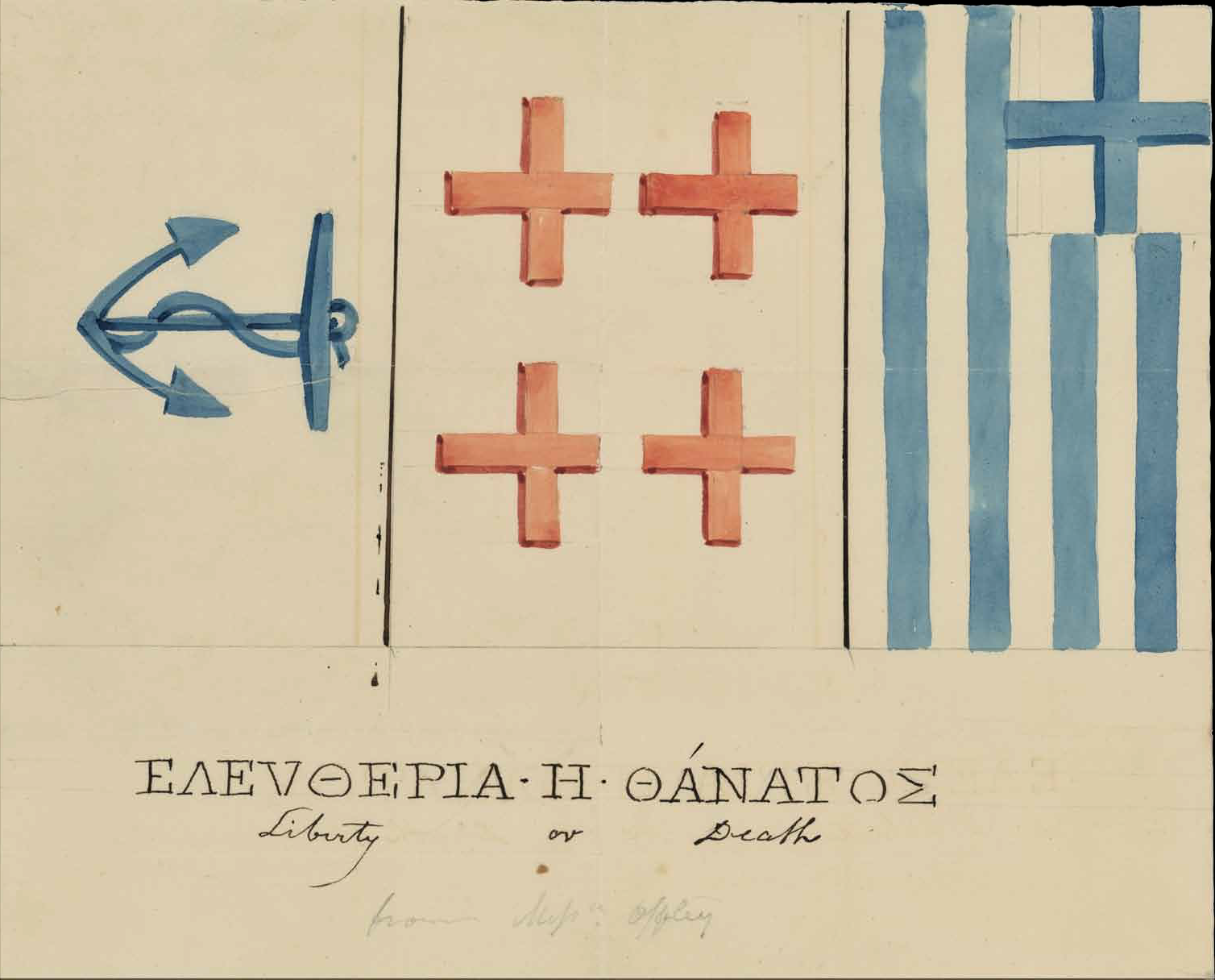 The letter constitutes a precious part of Greek history. It is a letter written on 28 January 1824 in New York by some J.J.L. addressed to some Gracie in Baltimore.

In the draft letter a lot of information is included, mainly on the emblems (Constantne’s Cross, “ΤΟΥΤΩ ΝΙΚΑ” etc.) the symbolisms and the flags of the Revolution. The information concerning the flag are coming from American compatriots who had seen it in Psara!

The most standing of all, however, is the page with the sketches of the flags and mottos, drawn with Chinese ink in 1824. Maybe world’s first of our flag on paper!

What did actually the contents of the letter mean?

The Philhellenic movement in America was great at that time. In various cities (New York, Boston, Baltimore, Pittsburgh, Cincinnati etc.) Philhellenic Committees were founded which gathered funds and clothing to be sent to Greece from various events such dances, concerts etc. for the relief of the hunger-striken population.

The result of this great mobilisation was the dispatch in 1827 of eight ships with food and clothing to Greece (On philhellenism in America see Stephen A. Larrabee, The American experience of Greece 1775-1865, New York 1957).

The New York Committee organised a dance on 8 January and it seems that a member of the Baltimore Committee was asking some information for the decoration of the ballroom for the dance they were preparing.

The dance of the Baltimore Committee had in fact taken place in February 1824 with great success. A nice description of the evening and the decoration of the ballrooms with Greek flags-evidently copying the ball of N. York- was published in the newspaper Ellinika Chronica [Hellenic Chronicles] published in 1824 in Missolonghi (The description was republished by M. Anninos in The Philhellenes of 1821, p. 63-65 and C. Lazos in America and her role in the 1821 Revolution, vol. I, Papazisis 1983, pp. 462-463).

“In answer to your inquiries respecting the Greek Cross and Flag, I send you the following:

The Cross adopted by the Committee of decorations, as the most appropriate to be displayed at our Greek Ball on the 8th of January was the Cross of Constantine.

It is asserted by Historians that it was seen by that Emperor in the Heavens with the inscription ΤΟΥΤΩ ΝΙΚΑ. By this conquer it occasioned his conversion to Christianity.

In a vision, which it is also said he had the same night, he was directed to adopt the Cross or Labarum as his standard and to inscribe the same on the shields of his soldiers. A further reason for exhibiting this cross was that Prince Ipsilanti fought under it as his banner in all his recent battles with the Turks. It is in the following form of the name of Christ in Greek representing the 2 first letters.

The proportions in this monogram, as taken from an ancient coin, should be:

the perpendicular piece to be of the same length with the transverse piece measuring from the lower part of the curve to the ground – as some authors say that when seen by Constantine, it resembled a flame, our object was to make it as near that color as possible, and after making numerous experiments, we covered it with a bright foil giving nearly a flame colour when a strong light was thrown upon it. Our inscriptions were in letters of gold in a white ground.

There is as yet no National Flag in Greece – each Island or State having its own.

There are three known to us:

– Cross Blue on a White Field.

– Anchor Blue in a white field.

The first of these was only exhibited as harmonizing best with our own and as it is the only one yet seen by some of our countrymen at Ipsara.

I have no doubt it would have given the Committee pleasure to send on the Greek Flag made for us to Baltimore, but the size of the Theater required a flag of 80 Feet length and as economy was studied by us as much as possible, we sewed pieces of bunting together, which have since been taken apart and sold.

We are therefore denied the pleasure of giving this small proof of our wish to cooperate with our friends at that city”.

Note on the Philhellenism of the time

The philhellenic movement in America, around 1823-24, had erupted. In the churches there were sermons in favor of the Greek Revolution, in the theaters special performances were staged to support financially the Struggle, while from 1824 American companies sent to revolutionary Greece swords, rifles, pistols, small cannons and medical supplies!

Many Americans fought on the Greek side, such as George Wilson of Rhode Island, James Williams of Baltimore, Captain John M. Alen, a close friend of General Lafayette, William T. Washington from Washington, and others.

In various cities (New York, Boston, Baltimore, Pittsburgh, Cincinnati, etc.) philhellenic committees were established which collected money and goods to be sent to Greece, through various events, such as dances, concerts, etc. to alleviate the grief of the starving population. The result of this great mobilization was the sending of eight ships in 1827 with food and clothing to Greece (Stephen A. Larrabee “Greece 1775-1865, How the Americans Saw It”). 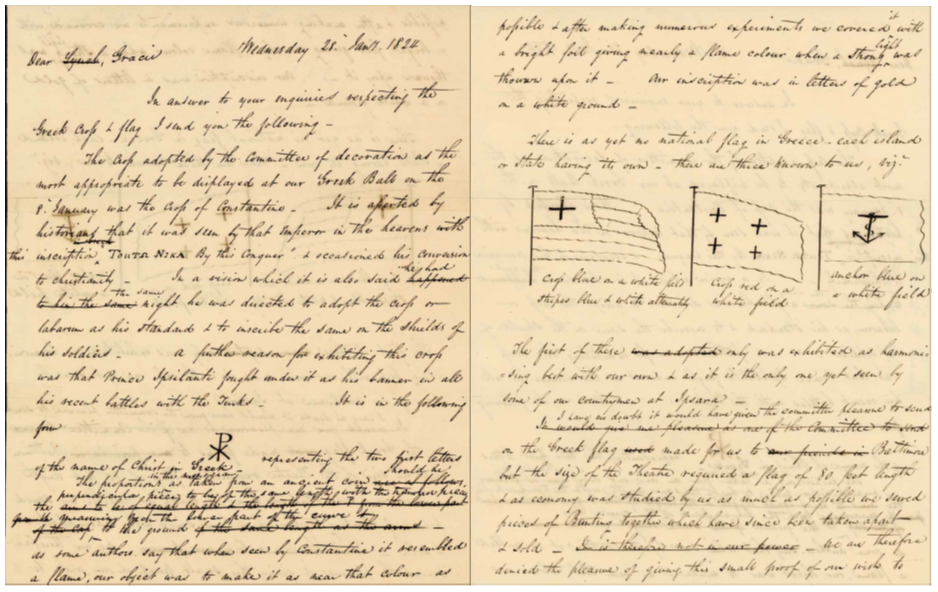