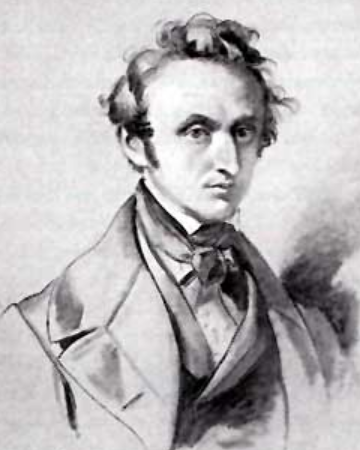 Carl Anton Joseph Rottmann was a famous German landscape painter and a beloved painter of the Bavarian king Ludwig I (1786 – 1868). He was famous for his mythical-heroic themes in his painting. Rottmann’s greatest artistic achievement was the creation of the “Greek Circle” (Griechenlandzyklus), a series of romantic landscape paintings of Greece, which he created after an assignment by Ludwig I. He was considered to be the “most important landscape painter of Munich”, and was one of the first German painters to accomplish realistic pictures of Greece (as noted by the German architect, Leo von Klenze, 1784-1864). The importance of his contribution was recognized in his time, and, after his death, a room of the New Gallery of Munich (Neue Pinakothek) was dedicated exclusively to the exhibition of the works of the “Greek Circle” (1853). He is the only artist to be awarded such an honor at the Neue Pinakothek.

He was born on 11 January 1797 in the Handschuhsheim district of Heidelberg and apprenticed with his father, Friedrich Rottmann, who taught painting at the city’s University. Carl’s younger brother, Leopold, also became a painter; without reaching an equal fame. Carl Rottmann´s mastery in using watercolor and the power of his compositions can be already seen in some of his first works. He was influenced by the Dutch landscape painters, the Frenchman Claude Lorrain (1600-1682), and the Englishman George Augustus Wallis (1761-1847), with whom he became associated during the latter’s stay in Heidelberg. Rottmann, along with his compatriots Philipp Fohr (1795-1818) and Ernst Fries (1801-1833), was one of Heidelberg’s leading Romantic painters, and influenced a number of younger landscape painters.

His moving to Munich in 1821 was a turning point in his rise as an artist. Through his wife, Friedericke Sckell, and her family circle, he came in contact with the Bavarian monarch, Ludwig I. Ludwig´s ideological and artistic program aimed to promote the Wittelsbach House in Munich, as well as to emphasize the common cultural heritage of the emerging new Greek state and Bavaria. The architectural buildings and the urban redesign of the “Athens on the Isar”, as well as the new artworks that were created, clearly supported this ideological program. As a patron of the arts, Ludwig Ι soon formed a circle of favored painters and architects around him. One of his favorite artists was Rottmann (from 1841 onwards the official “painter of the royal court” – Hofmaler), to whom he commissioned the illustration of the galleries of the garden of Munich (Hofgarten) with Italian landscapes. The accessible to the public gardens would offer a “free history lesson”. The Bavarian monarch chose to emphasize his homeland’s relationship with Italy through an artistic tour of the neighboring country. In order for Rottmann to enrich his repertoire of images with realism, Ludwig instructed him to visit Italy (1826-1827). Thus he created 28 idyllic topographies (frescoes) by 1828, which were originally intended to be exhibited at the Hofgarten.

The cycle of the “Italian works” paved the way for another important assignment of Ludwig I to Rottmann. The eldest son of the monarch, Othon, had already been crowned King of Greece in 1832, and the creation of some monumental works that would underline the alliance and friendship between the two countries were needed. Thus Ludwig financed Rottmann´s transition to the newly built Greek state (1834-1835) to collect material for the creation of “Greek works” in the northern wing of the Hofgarten galleries. These works would complete the program of idyllic – romantic landscape that was inaugurated with the Italian themes. The original plan was to create 38 scenes. Apart from Rottmann, Ludwig’s envoys to Greece were the painters Ferdinand Stademann (1791-1873), Ludwig Lange (1808-1868), Peter von Hess (1792-1871), the army officers / painters Karl Wilhelm Freiherr von Heideck (-1861) and Karl Krazeisen (1794-1878), as well as the architect Leo von Klenze (1784-1864). Peter von Hess was also commissioned by Ludwig I to create images from the Greek Revolution for the Hofgarten’s north portico.

Ludwig Lange was an important companion of Rottmann in Greece, who provided him with valuable advice on his architectural plans. Rottmann encountered difficulties during his one-year journey, as evidenced by a number of letters he wrote at the time. He toured both mainland Greece (Athens, Corinth, Nafplio, Tiryns, Mycenae, Epidaurus, Nemea, Sparta, Thebes) and the islands (Evia, Naxos, Delos), and created hundreds of sketches of the landscapes he visited, sometimes panoramic representations with pencil and watercolor. 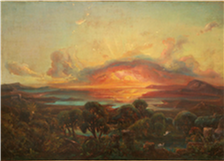 The image of the war-torn Greece that the painter came across during his twelve-month stay was far from the idealized “Arcadia” that Ludwig I wanted to promote. For the depictions of places of significant historical importance, e.g. “Schlachtfeld von Marathon” (the battlefield of Marathon), Rottmann avoided narrating events through the depiction of persons, assigning it more to the elements of nature, animals or weather phenomena, with which he “confesses” the historical events to his viewer. He also tried to combine the evidence of antiquity with the Greek modern presence, as in “Athen, vom Brunnen aus” (view of Athens from a fountain). These choices made him the proponent of a new “romantic, heroic landscape”. His works stand out for their skillful rendering of light and subtle shades of sky. The expression “Rottmannhimmel” (Rottmann sky) as a reference to a clear blue sky survives in Munich up to this day.

After returning to Munich in October 1834, he transferred his drafts to watercolors, in order to present them to Ludwig I and gain his approval for their transfer to the Hofgarten. For the “Greek Circle” he first used encaustic painting, which guaranteed longevity in the works, then experimented with the use of resin. By 1849, he had created 23 landscapes, thus reducing the number of works originally planned. The idea of their outdoor exhibition was abandoned. From 1853 the scenes were on display in a special room of the New Gallery in Munich that bore his name (Rottmann-Saal, Neue Pinakothek). This room, together with the New Gallery building, was closed with the outbreak of World War II. Due to their weight, the images could only be moved to the basement of the museum, where they suffered a significant damage. In 2003 a new Rottmann room was created in the new building of the New Gallery (1981), where 14 of his 19 restored paintings were exhibited.

Carl Rottmann died in Munich on July 7, 1850, just a few weeks after completing his last painting of the “Greek Circle”. His tomb is located in the Alter Südfriedhof in Munich. 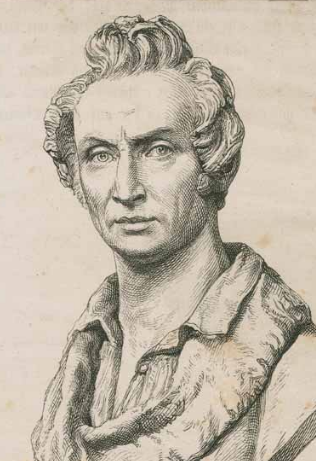 SHP honors the great painter and Philhellene Carl Rottmann, who preserved for the younger generations the image of Greece that he confronted during the first years of the Greek state, through his atmospheric landscapes.