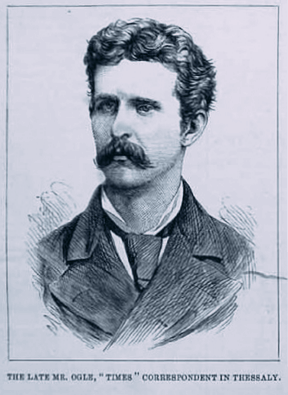 The SHP honors the memory of a great English philhellene, a journalist and report of the London Times, who was murdered by the Turks in Makrinitsa, during the revolution in Pelion in 1878. It was the first recorded death of a journalist – war correspondent in Greece.

Charles Chaloner Ogle (Charles Ogle), was born in 1851, in London of a wealthy family. He studied architecture at the University of London and worked with the famous architect Frederick William Roper. In addition to his profession, he developed remarkable writing / journalistic skills in collaboration with the “Builder” magazine and subsequently with the Times. In 1876 he asked to travel to the Balkans and soon became an official correspondent for the acclaimed British newspaper. His mandate started with an important mission in Serbia, where he covered the Serb-Turkish war; then he moved to Greece.

Charles Ogle had already become famous as a journalist. At the same time, he did not hesitate to express his philhellenic feelings and his love for Greece. In Athens, he collaborated with the famous architect Ziller, while also teaching English language classes for free. He was distinguished for his philhellenism and was honored by King George I with the medal of the Cross of the Savior.

In his capacity of the official Times correspondent, he also covered subjects related to Greece, notably in Crete and Thessaly, which were claiming their independence. He was known for the intense philhellenic character of his texts which had a great influence on the public opinion in Europe.

As of 1876, preparations for a liberation struggle had begun in Pelion. On 15 January 1878, the Greeks of Pelion declared their opposition to the Ottoman occupation, they set up the Provisional Government of Pelion and decided to fight for the independence of Thessaly and its union with Greece.

A large force of regular Turkish army under Recep Pasha rushed into the area, accompanied by hordes of irregular soldiers of Ammu Bey. Various battles took place, followed by a terrible slaughter of the population by the Turks.

Charles Ogle was only 25 years old at the time. He arrived in Pelion immediately to cover the battles under his capacity of journalist accredited by the Times.

The first major battle took place on 6 February 1878 in Makrinitsa and lasted three days. The Greeks were defeated and the Turks committed atrocities with many victims from the civilian population, even children. On 10 February 1878, a few days after the battle of Makrinitsa, the Turks assassinated a big number of inhabitants of the village of Vourgarini. Their corpses were burned and dismembered in an attempt to keep the crime secret. After an investigation, Charles Ogle found traces of the carcasses, and informed with a correspondence to the Times the public opinion about this horrible slaughter.

Charles Ogle then went to Makrinitsa where he helped the local population in every possible way. He even commissioned 30 workers to build trenches covering the expenses on his own, to strengthen the Greek defense positions, and remained there until 17 March 1878, where he found a horrible death during the second Battle of Makrinitsa.

After the end of the battle many European diplomates visited Pelion to investigate the situation and to stop the massacres. The investigation revealed, among others, that Charles Ogle had been murdered by Turkish soldiers. At first the Turks hid his corpse, but his passport was found in the hands of a Turkish soldier, while another Turkish soldier was selling Charles Ogle’s clothes.

Finally, the corpse of this noble English journalist and great philhellene, was found headless. Doctors of an English and an Italian ship, carried out an autopsy and placed the corpse in a case to be transported to Athens by steamer for burial. The European consulates found though their interrogations in Pelion, as it was reported newspapers, that Charles Ogle was murdered after the end of the battle. A woman and a child who saw the scene of the murder testified that after the murder, Turkish soldiers cut off the head of the English correspondent, nailed it to a spear and paraded showing it around and shouting.

His body was transported to Piraeus from Volos by the English warship “Wizard”. Women from Volos had embroidered a textile, which was place in the coffin, bearing the following in ancient Greek:

The news reached Athens, shocking the population. Charles Ogle’s death caused an unprecedented thrill. The merchants of Athens prepared a wreath with a tape bearing an inscription:

Charles Ogle’s funeral took place on 29 March 1878 at the church of St. Dionysius, in the presence of the Catholic Archbishop. Many officials and people attended the ceremony.

The announcement of Charles Ogle’s Funeral

The funeral speeches were delivered at the cemetery by the Greek journalist and politician Timoleon Philemon and the French ambassador in Athens. Charles Ogle was buried next to the tomb of Admiral Kanaris, a hero of the Greek War of independence.

Charles Ogle’s family sent a telegram to the Greek Prime Minister Alexandros Koumoundouros, thanking the Greek government, and MP Harilaos Trikoupis, who organized the burial of their son.

The name of the great English philhellene is given to a street in Volos.

The sacrifice of Charles Ogle and of hundreds of Greeks in Pelion in 1878, was not in vain. A few years later, the Berlin Conference (March 1881) granted Thessaly and Epirus to Greece. In his work on the “History of the Greek Nation”, the reputable Greek historian Paparrigopoulos confirms that this was achieved thanks to the efforts of England, and in particular of its Philhellene Prime Minister William Ewart Gladstone (1809–1898). 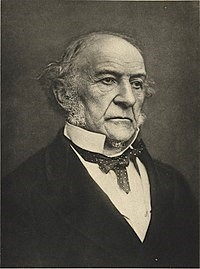 Gladstone expressed in public, after the expansion of the borders of Greece into Thessaly and Arta, the great joy he felt when Thessaly united with mother Greece.

His words are written in golden letters on the base of his statute, placed in front of the University of Athens, as an expression of honor and gratitude to this great Philhellene.