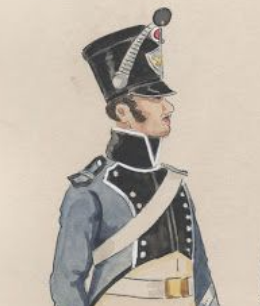 Gramsi Michele (1786-1873). Italian Philhellene form Naples. Artillery captain of the Army of the Kingdom of Naples. He reached Kalamata on May 1, 1821 and joined the first regular military unit, under the command of French officer Philhellene, Joseph Baleste. From May 15 to June 16, 1821 he took part in the siege of Navarino. On December 4, 1821, he was wounded during the siege of Nafplio. In April 1822 he was responsible for the military recruitment ordered by the Revolutionary Government in the Aegean islands, and contributed to the mobilization of 282 men. He fought in the battle of Dervenakia on July 26, 1822, holding the rank of major. On September 5, 1822 he served in Nafplio. The Second National Assembly of Astros awarded him the rank of colonel in March 1823. For his action, in December 1823, he was honored with an honorable mention by the Executive Corps. In December 1825 he took part in the second siege of Tripolitsa. From February 1826 to May 1827, he took part in the siege of the Acropolis of Athens, as commander of the Artillery of the Regular Army, under the orders of the French Philhellene Charles Fabvier.

He received two medals for his participation in the Greek War for independence.

At the end of the Greek Uprising, he continued to serve in the Greek Army as an officer. He died in 1873 in Athens.

SHP pays tribute to this great Philhellene and his contribution for the liberation of Greece.

The Ambassador of Montenegro visits the Philhellenism Museum