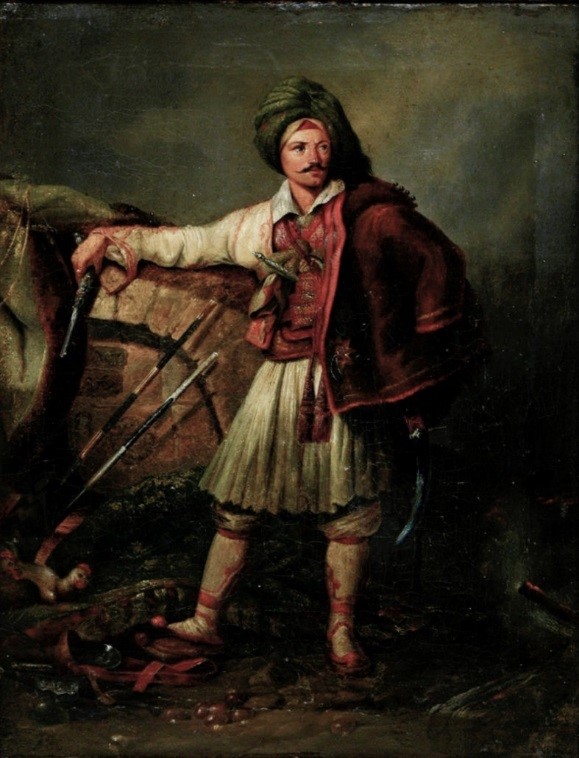 Painting of the German painter Peter von Hess (1792-1871). It shows a Philhellene in Greek uniform.

During the Greek struggle, many Philhellenes arrived in Greece and fought alongside the Greeks in many different roles and in many different contexts. However, some of them really wanted to understand the character of the Greek warriors and completely adopted the life of the Kleftes. William St Clair estimates these Philhellenes at about ten. Among them is the French Philhellene, Hyacinthe Delavillasse, almost unknown in Greek history. Any testimonies about this great Philhellene come exclusively through the works of other philhellenes or Greek comrades-in-arms.

The French Philhellene F. R. Schack, who met him in June 1826, states that De Lavillasse was born in Carpentras, France, near Avignon. He was an officer in Napoleon’s Grand Army, who was expelled by the French army and deported from France in 1820, “after serving his homeland for twenty years”. He appears to have been the victim of a political plot, and was accused of taking part in a conspiracy. According to an official list of the French Ministry of War, De Lavillasse was an infantry captain in 1817.

When he was expelled from his country, he turned his attention to the then in revolt Greece, with the Greeks fighting for freedom. He went to Greece on a Greek ship that departed from Marseilles on July 18, 1821. The same ship was carrying Alexandros Mavrokordatos (who had even chartered it and loaded it with ammunition he had bought), the French Philhellene Maxime Raybaud and 80 Greeks and Philhellenes.

The French philhellene Maurice Persat, notes that he was one of the first to arrive in Greece to participate in the Struggle. Indeed, in the Archives of Greek Paligenesia we find a first inscription referring to him as “Labilai” in 1822.

Another Frenchman, Philippe Jourdain, reports that De Lavillasse had fought in Peta, and that after the unfortunate battle and the grievances suffered by the forces of the Greeks and Philhellenes, he retreated with the rest of the suffering and sick Philhellenes who survived, to Messolonghi. From there, despite being sick with a fever, he took an active part in battles in the surrounding area. Later that year, Pouqueville reported that De Lavillasse was fighting in Argos, ill again.

De Lavillasse then became a Greek citizen, and followed Kolokotronis as a captain. According to the testimony of Fotakos, he took part along with other chieftains, in the battle against Dramalis in Dervenakia on July 26, 1822, as a captain-bodyguard of Kolokotronis.

Michael Oikonomou describes a real incident for his friend De Lavillasse, after the successful battles of the forces of Kolokotronis near Patras, highlighting his unbridled enthusiasm. De Lavillasse, after reaching the gate of the “Gerokomeio” fortress, was the first to knock loudly and “with great joy for the victory of the nation”, turning to the Greeks who were watching him, shouting to them in poor Greek “come, come”. He invited them with gestures to break through the gate of the fortress and enter in it.

It is a fact that his bravery was recognized by both foreign and Greek comrades-in-arms, but also by the Greek administration. With the decision no. 154 of D. Ypsilantis, President of the Parliament, on June 24, 1822, “Captain Lavillaz” was promoted to the rank of Lieutenant Commander for his work in his new homeland. It is striking that the decision was taken on the grounds that “the French captain Mr. Lavilaz, who has suffered a lot for twelve months now, endured all kinds of deprivations, works hard for the common interest in Patras”. This decision is a presumption of his presence in Greece from the beginning and the deprivations he suffered in the Struggle.

According to Henri Fornèsy and his notes on the Philhellenes, De Lavillasse gradually rose to the rank of Colonel. In fact, for some time he served as the Chief of the staff of Kolokotronis, to which he was assigned. The information is confirmed by Greek historians, including Ap. Vakalopoulos, who describes him as a comrade-warrior of Kolokotronis.

Even more, F.R. Schack cites him in his memoirs as a man who enjoyed the full confidence of Kolokotronis: “The two men were inseparable comrades-in-arms, fought together in a hundred battles, and twenty times their swords were stained with the blood of barbarians”.

De Lavillasse had a good reputation in the army, loved Greece and longed for its freedom. In a letter published on September 6, 1823, Pouqueville expressed his concern about the internal quarrels of the Greeks, which prevented them from completing the Struggle and endangered the country’s political situation. Even more, he admits that if the Greeks were united, the Turks would have been defeated long ago.

Moreover, Maxime Raybaud, De Lavillasse’s comrade-in-arms, also expresses his greatest appreciation for him in his memoirs, commenting on his special case as follows:

“This success is largely due to the brave De Lavillasse, who leading some of the irregular Moraites, was the first to enter the city and pursue the enemy as far as the walls of the fortress. Being unsatisfied with the services to which we should be limited with his half-regular soldiers, almost always unhappy, malnourished and poorly paid, this officer decided, a few weeks after Ypsilantis returned to Tripoli, to leave the Baleste battalion to go outside Patras. Due to his bravery, he quickly gathered around him one hundred of the Armatoloi of Achaia. He left his uniform to dress in the clothes of the Kleftes, the pre-eminent clothes of the war, and followed in all areas the customs of his new comrades-in-arms, sharing with them the difficulties, the deprivations and even the complete absence of cleanliness that characterizes their way of life“.

More particularly, he points out that “in this easy abandonment of civilized manners for the sake of such harsh customs is perhaps hidden a greater value than we can imagine at first, a value which is better understood if we consider that it is the only foreigner who has managed to adapt to this way of life”. “This officer, as a witness to his brilliant deeds, had only people who forgot him. Too many times he has seen Turks fall from his strikes, but he leaves it to his friends to take care of making it known to the public”.

It seems that the poverty he was facing at that time was such, that in a letter addressed by De Lavillasse to the Minister of War, Ioannis Kolettis, in May 1822, he asked him to send him “a medicament made from tobacco and a French or Albanian shirt”. The tragic situation of De Lavillasse is testified by a dramatic incident reported by Fotakos, during the invasion of Dramalis, shortly before the battle of Dervenakia. According to his testimony, De Lavillasse hid in a vineyard where Turks were going to steal grapes, he killed a Turk and took off his clothes to wear as his own were completely worn.

Despite the privations and poverty, it appears that De Lavillasse continued for several years his actions in Greece and more specifically in Roumeli (main land). This is evidenced by a letter he sent to the Secretary of Defense, asking to allow him to enlist in the “Regular Corps” organized by the French General Gerard. A corps that gathered a large number of former irregular warriors during the period of Kapodistrias. 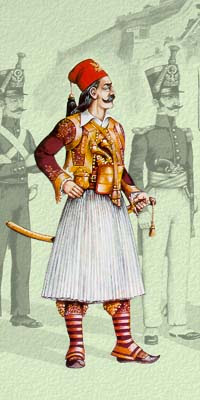 Unfortunately, his traces are lost somewhere in Greece, as no further details are known about him.

William St Clair states that De Lavillasse bore the title of marquis in his country, as he came from a noble family. He was also honored with the Legion of Honor for his service in the Grand Army.

De Lavillasse is another freedom fighter, honored by Greece for his contribution to its war of independence.

Omphaloscopy or openness? The dilemma of a celebration