Born at the Hôtel des Deux-Ponts in Strasbourg, he was the eldest son of Maximilian Joseph, heir to the Ducal throne of Zweibrücken (later Maximilian Joseph I of Bavaria), by his first wife, Princess Augustine Wilhelmina of Hessen-Darmstadt. At the time of his birth, his father was a French army officer serving in Strasbourg. He was a successor to King Louis XVI of France (1754-1793).

On April 1, 1795, his father succeeded Louis II’s uncle, Charles II, as Duke of Zweibrücken. Then, on February 16, 1799, he became elector of Bavaria, palatine count of the Rhine, Arch-Steward of the Holy Roman Empire and duke of Berg, when Sulzbach’s electoral house extincted after the death of elector Charles Theodore. Finally, he became king of Bavaria on January 1, 1806.

From the beginning of 1803, Ludwig studied in Landshut, with Professor Archbishop Johann Michael Sailer of Regensburg, as well as in Gottingen. On October 12, 1810 he married Theresia, Duchess of Saxe-Hildburghausen (1792–1854), daughter of Frederick, Duke of Saxe-Hildburghausen. The wedding was the occasion of the first Oktoberfest.

Ludwig strongly criticized his father’s alliance with Napoleon I of France. Despite his anti-French policy, being the heir to the Bavarian throne, he was forced in 1806 to take part in the emperor’s wars with allied Bavarian troops. As commander of the 1st Bavarian Division of the French VII Army Corps, he served under General François Joseph Lefebvre in 1809.[1]. He led his Division to the victorious for the French battle of Abensberg on April 20, 1809, against the Austrians.[2].

By the Treaty of Ried of October 8, 1813, Bavaria left the Confederation of the Rhine and agreed to join the Sixth Coalition against Napoleon, in exchange for the guarantee of its continued sovereign and independent status. On October 14, Bavaria officially declared war on France. The Treaty of Ried was passionately supported by the heir Ludwig and by the Bavarian general von Wrede.

Already at the Congress of Vienna in 1815, Ludwig advocated a German national policy[3]. Until 1816 he served as Governor-General of the Duchy of Salzburg, and strongly opposed its concession to Austria. His second son Otto (1815-1867), the later king of Greece, was born there. Between 1816 and 1825, he spent his years in Würzburg. He also made many trips to Italy and often stayed at Villa Malta in Rome, which he later also bought (1827).

In 1817 Ludwig also took part in the fall of the French-loving prime minister Count Max Josef von Montgelas, whose policies he had opposed. He succeeded his father to the throne in 1825.

Ludwig’s reign was marked by his strong Philhellenism and the fact that he was a patron of the arts.

Characteristically, from the beginning of the Greek Revolution of 1821, Ludwig, as heir to the Bavarian throne first and then as king of Bavaria, was one of perhaps the few members of the European hegemony, who openly and actively supported the Greek cause. According to the existing status quo of the time, the rest of the European revolutions and their governments were either openly hostile (because of the Holy Alliance) or neutral / indifferent. Nevertheless, on the one hand, Louis facilitated the creation of the Philhellenic Committee of Munich under Thiersch and Senk[4]. At the same time, on the other hand, as a protector of culture, he published various collections of poetry, which were sold to the benefit of the revolted Greece[5]. His action was multifaceted, and Ludwig had gone so far as to write himself articles and proclamations, and publish them under his own name and sometimes even anonymously. In addition, Ludwig spent from his personal fortune, 1,500,000 florints for the struggling Greeks. 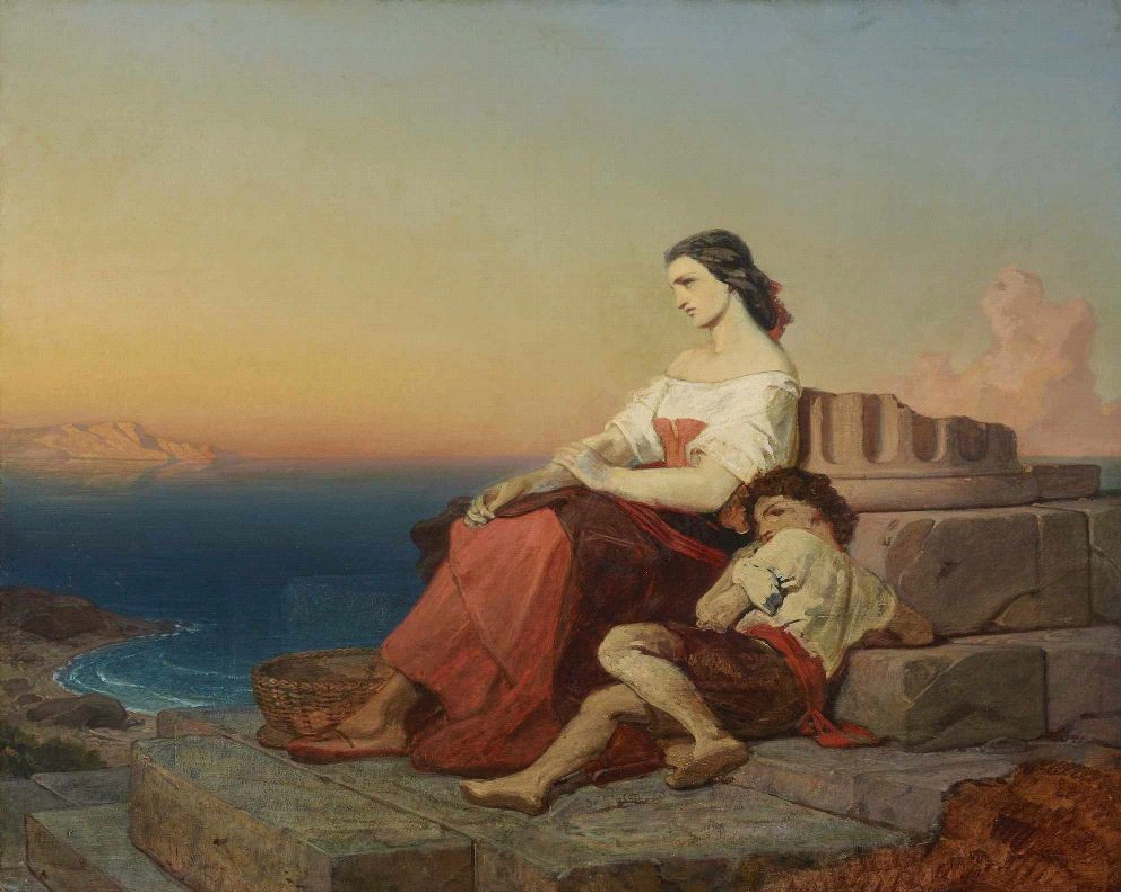 Emblematic painting with an allegorical presentation of mother Greece after the liberation, by the royal family of Bavaria (SHP collection)

Moreover, in order to better help the Struggle of the Greeks, Ludwig came in 1825, in contact (through the Swiss banker Jean Eynard), with the Philhellenic Committee of Paris and collaborated with it. Actually, during the period 1825 – 1826, he sent several officers of the Bavarian Army unofficially to Greece, in order to help the Struggle militarily. The most prominent of these officers, were Colonel Karl Wilhelm von  Heydeck (1788-1861) (later a member of Otto’s Regency) and Lieutenant Karl Krazeisen (1794-1878), who, among others, painted the authentic figures of the 1821 chief-fighters (e.g. Theodoros Kolokotronis, Georgios Karaiskakis), but also of many Philhellenes.[6].

It is worth noting that as of 1823, Ludwig began to grant scholarships to the children of the chief-fighters of the Greek War for Independence (mainly to orphans, such as the later generals and ministers Dimitrios son of Markos Botsaris and Scarlatos Soutzos). These children, studied either at the Bavarian Royal Military Academy or at the University of Munich[7]. At the same time Ludwig endows (either directly or indirectly through his son Othon), daughters of chief-fighters, such as Penelope Notara, daughter of Georgios Karaiskakis[8].

Ludwig also conceded one of the Roman Catholic Churches of Munich for the Greeks to perform their religious duties.

This church, which still exists today, is the Holy Temple of the Transfiguration of the Redeemer.

Finally, on the occasion of the Exodus of Messolonghi, on April 10, 1826, the then King of Bavaria, Ludwig I, is the first European ruler, who called for a ceasefire and the granting of independence to the Greeks.[9].Whereas, when Ioannis Kapodistrias took over as governor of Greece, Ludwig I refused (despite the insistence of Thiersch), to nominate his second son Othon as future king of Greece, respecting the situation in Greece at that time[10].

For his active contribution to the success of the Greek Revolution of 1821, Ludwig I, King of Bavaria, was honoured in 1833 by the newly formed Greek state, with the Grand Cross of the Order of the Knights of the Redeemer[11].

Finally, the philhellenism of Ludwig I is confirmed by many buildings in Athens, such as the Old Palace (now Greek Parliament), designed by the architect Frederick von Gertner and financed by Ludwig I himself, as well as monuments in Munich, such as the Propylaea, etc.

In March 1848 Ludwig I was forced to resign from his throne, in favour of his son Maximilian II, due to the complaints against him for using the Bavarian state treasury to grant, without the approval of the parliament, of the third instalment of the loan of 20,000,000 francs to strengthen Greece, which the Great Powers were obliged to give and had refused doing so. Since then, after his dethronement, he lived in isolation and devoted to his literary interests. He died in Nice, France on February 29, 1868 and was buried in the Church of Saint Boniface in Munich.

In his personal life, Ludwig I of Bavaria, despite his high office, was a ruler, who lived very modestly and who was very accessible to the people.

From his marriage to Duchess Therese of Saxe-Hildburghausen (1792–1854), he had the following descendants:

Louis I is a noble and emblematic figure of Philhellene, and a great national benefactor and friend of Greece and the values ​​of Hellenism. Greece and the Greeks will forever honour Ludwig I, and SHP will undertake a series of initiatives to promote his work and his contribution to the liberation of Greece and the cultivation of a Greek national consciousness, based on the same values ​​with the ones of the construction of the European Union.

Commemorative medal of 1836, on the occasion of the visit of Ludwig I to Greece (SHP collection) 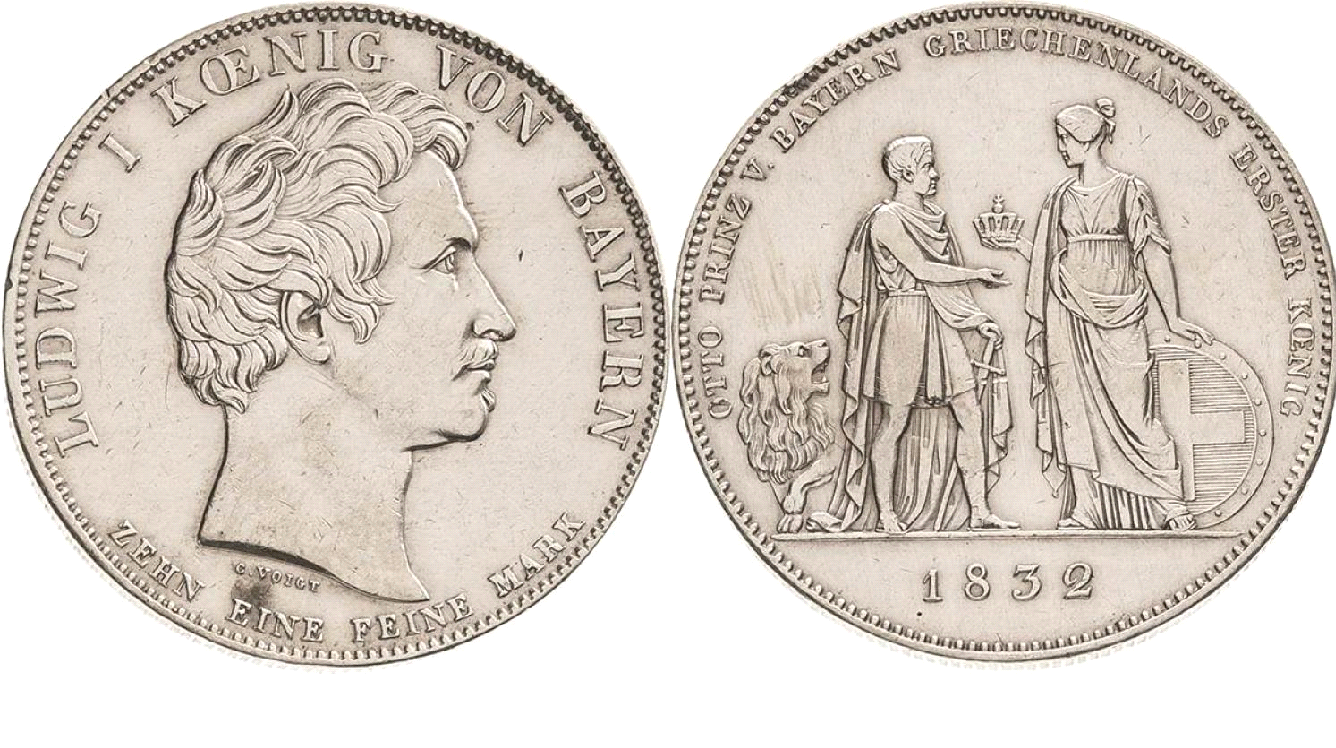 Commemorative medal of 1832. Ludwig I and on the obverse side his son Othon, who takes the throne in Greece (SHP collection) Auguste-Théodore Garnot, the first chief of the Corps of Engineers of the ...
Scroll to top