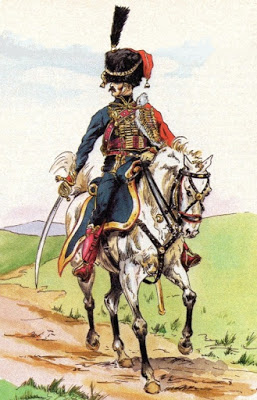 Officer of the French army during the Napoleonic Wars

The General Jean-Chrétien Louis Dentzel was a baron, and French Philhellene who took part in the Greek Revolution, as a commander of the troops of Western Greece.

Jean-Chrétien Louis Dentzel was of German descent, born in Landau, Rhineland, on May 6, 1786. He was one of eight children of Georges-Frédéric Dentzel, a reputable officer who participated in the American Revolution, and Sibille Laure Wolff. His nephew was Georges Eugène Haussmann, governor of the Seine region in Paris, who became famous for the urban reform of the city of Paris during the reign of Napoleon III. A central Avenue in Paris is named after him.

Dentzel attended Military School in Fontainebleau, graduating on September 21, 1805. He was awarded the rank of lieutenant at the age of 19. He then served in the cavalry and took part in many military operations during the first Napoleonic Empire in France, where he distinguished himself.

He was promoted many times and came to receive the rank of lieutenant colonel of the Cavalry. According to his personal register, he participated in many campaigns, served among others in the 6th Usser Regiment, and was often placed in important positions and on the side of important generals. He took part in the campaigns of Austria in 1805, Prussia in 1806, Poland in 1807, Spain in 1811, Russia in 1812, and in Napoleon’s Great Army in France in 1813 and 1814. He was wounded in three of them. From his service in the Army he gained significant experience and knowledge in matters of strategy and military organization.

At the Battle of Waterloo in 1815, he served in Napoleon’s headquarters and fought alongside his father.

Dentzel was a member of the Carbonari and participated with his friend (later also Philhellene) Fabvier, in various other conspiracies against the Bourbon regime. The two close friends had significant action of fictional dimensions in France at the time. In fact, they have even become the heroes of a novel in France for their action in 1822. For these actions, he was sentenced in 1822 to 4 months in prison and placed in inactivity in France, with the rank of Colonel. This situation did not allow him to continue his career in his country. So he retired to Frankfurt and returned to France in 1824.

At the same time, his restless spirit was thrilled by the Greek Revolution. His enthusiasm later led him to Greece. So he left France, without even informing his family, and arrived in Greece to work with Fabvier in an effort to organize the Greek Regular Army. His family was unaware of his fate and considered him dead. He arrived in Greece at the end of 1827 from Corfu. Evidence of its presence and action dates back to the beginning of 1828. It is noted here that it seems that there was another Philhellene of the same name, who served as captain with the Philhellene Frank Abney Hastings, and who was present at the same time in same wider area (Western Greece). It seems that captain Dentzel also had an important, but different, action at sea.

Jean-Chrétien Louis Dentzel took office in Greece on February 1, 1828 in Dragamesto, Aitoloakarnania, under the British General Church. He was appointed brigadier general, chief of staff of the Army of Western Greece, whose Commander in chief was Church. Kapodistrias later promoted him to a General and assigned him the command of the troops of Western Greece, replacing General Church on June 24, 1829. Dentzel, according to Herni Fornèsy, “participated with distinction in all campaigns, in Aitoloakarnania, Evrytania, that is, in Dragamesto, Karpenisi, etc.”. Several other Philhellenes and Frenchmen also served in the Army of Western Greece, which was smaller than that of Eastern Greece and did not exceed the number of 3,500 men.

Dentzel did undertake and accomplished a very important job. After the occupation of Messolonghi by the Turks, the failure of the battle of Analatos in Attica, during which Karaiskakis, but also many Greeks and Philhellenes, were killed, and the surrender of the Acropolis, the Revolution in central Greece was reprimed and the control of all territories passed to the Turks. The chieftains had crossed into the Peloponnese or accepted to submit to the Turks (accepting to worship them according to the tradition at that time). This development was particularly bad because, according to the Treaty of London of 1827, a Greek state would be established on the lands that remained controlled by the revolutionaries. The Greek Administration was trying in every way to regain control in Central Greece. In November 1927, the great Philhellene Frank Abney Hastings landed General Church and an expeditionary force in Dragamesto, in Western Greece. From there, Dentzel undertook, gradually and methodically, to fortify the positions of the Greek forces, and then to liberate the Greek villages and the Greek areas, one after the other. He treated the entire population in an excellent way, he restored the municipal administration of the officials in each community and negotiated the return of those chieftains and local populations who had accepted to submit to the Turks, getting them to support the Greek Administration. In a relatively short period of time, after constant clashes and battles with the Turks, Dentzel liberated almost all of Western Greece.

Like his predecessor, British General Church, Dentzel made efforts to reduce fraud in the army. In this endeavor he had to face many reactions. In this context, he submitted to Governor Kapodistrias a series of important proposals, such as the issuance of an individual booklet for each soldier and each officer, which would function as an identity and as an individual register, proposals that were accepted. In addition, a Gendarmerie Corps was formed in Vonitsa during his time, most likely on his own initiative.

And while everything was going well, the terrible military uprising of 1829 broke out. A group of Greek soldiers revolted, using as an excuse the inability of the government of Kapodistrias to pay their salaries timely, but also because of the rivalries between Souliotes and Roumeliotes chieftains. In fact, the insurgents abandoned their positions on the northern borders, planned to integrate the troops of Eastern Greece, led by Dimitrios Ypsilantis, in the last battles against the Turks, and to march against Kapodistrias. Augustinos Kapodistrias wanted to bring those responsible to justice. However, the Governor disagreed and decided to grant them a favor. Dentzel’s role in calming the spirits and avoiding another civil conflict was catalytic. He was reminding the Greeks that with these actions Greece would lose territories and important portions of the population would lose their freedom, and called on them to realize their responsibilities towards the homeland and God. After the order was restored, Dentzel strengthened and fortified the positions on the northern border, thwarting the plans of the Turks of Arta to invade Western Greece again.

Dentzel nurtured feelings of great love for the Greeks, showing understanding and willingness to handle developments with diplomacy. The way in which he addressed his friends speaks for his feelings and character. For example, when writing to friends like Chief Ragkos, who served under his command he signed as follows: “Your brother, General Dentzelos.” He had a great influence on the circles of the Philhellenes and the Greek chieftains and he was supported by the Philhellenic committees which were financing his efforts in the Greek army. In 1829 he even filed an application to be naturalized as Greek and get the Greek citizenship.

During his stay in Greece, Dentzel usually lived in the mountains and under hoarse/bad conditions, close to the local population and his soldiers. Due to these conditions, he became very ill, and finally lost his life.

He died on September 3/15, 1829, from an illness in Vonitsa, at the age of 43, before he was able to receive his naturalization as a Greek, which was granted and was on its way to him. Denzel was not married and left no descendants. According to Henri Fornèsy, “His death caused great sorrow to his colleagues, because of his fearless character, his abilities, the subtlety of his manners, the confidence he instilled in all the classes of the army.” He was replaced by the former commander of the Philhellenic Company, the Italian Vincenzo Pisa. His career in Greece became known in France only after his death.

Baron General Jean-Chrétien Louis Dentzel was one of the most selfless Philhellenes who contributed much to Greece’s struggle, and most importantly at a critical time. To this great Philhellene Greece owes the fact that it managed to claim and succeed to integrate all of Western Greece into the newly formed free state.

The European topicality of the Greek War for Independence

François-Antoine-Christophe Gérard, Philhellene, Commander of the Regular...
Scroll to top