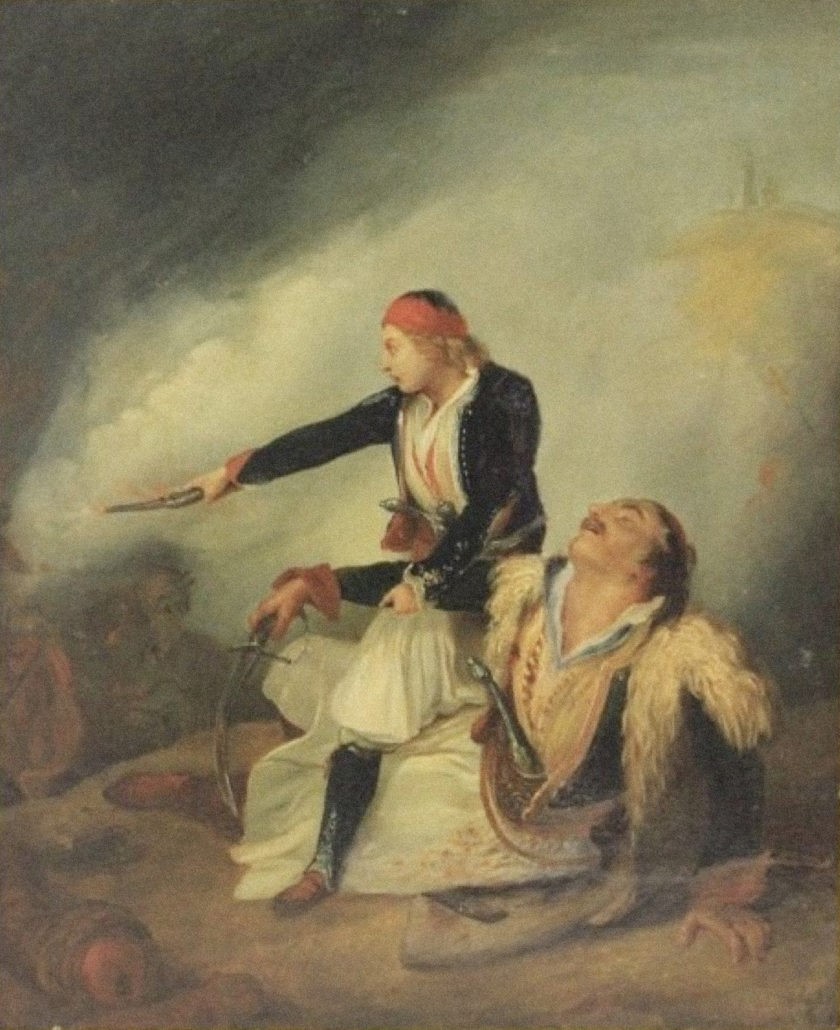 The Hungarian government recently erected a monument to Pay tribute to the fallen Hungarian Philhellenes in favor of the struggle for the independence of Greece, in the Municipality of Nikolaos Skoufas (Peta). At the same time, the Hungarian Parliament sent the national flag of the country to the Museum of Philhellenism in Athens.

The history of the two countries is of particular interest and has many coincidences.

FIGHT FOR FAITH AND HOMELAND.

This slogan has deep roots in Hungarian history.

The Hungarian Kingdom, after the beginning of the 16th century, was divided and politically unstable. It included the present-day Romania before its occupation under the Ottomans. In 1514 the revolt of György Dózsa took place in the area of ​​present-day Hungary. He was a Hungarian nobleman from Transylvania, similarly with his many of his haiduks (the haiduks were the “Thieves” of the Northern Balkans), who were mainly farmers and monks or priests. Their main purpose was to defend themselves against the Turks. At the same time, the uprising had social inspirations. In this context, the haiduks farmers were fighting for the first time with the slogan “for the Christian faith and for their country”.

In 1552, during the Turkish occupation of Timisoara in Romania, the leader of a Hungarian military corps led his fighters into a hopeless unequal battle. In order to encourage his warriors, he asked them to fight for a glorious death for their faith and homeland (pro fide, pro patria). The history of this war was written by the contemporary Hungarian Franz von Forgách-Ghymes (1530 – 1577).

In 1605, the Hungarian Haiduks of Transylvania revolted under the leadership of the Hungarian Prince Istvan Bocsksai against the Emperor of Hungary and the Holy Roman Empire, Rudolf II. In a letter, Bocskai explained that the uprising was in defense of the “ancient freedom of the nation and the faith” and that they wanted the progress of their homeland (patria) Transylvania, which they considered “the light of the nation”. The same is explained by two other Hungarian chieftains of the Haiduks in their own letter:

“We rebelled and took up arms for the Christian religion, and for the name of Jesus Christ, our Savior and our sweetest homeland”.

In 1703-1711 the revolt of the Hungarian Francis (Ferenc) Rákóczi II (1676 – 1735) against the Austrians took place. The slogan was “with God for the homeland and freedom”. This uprising resulted in the provisional independence of Hungary and Transylvania. Armed forces from various ethnic groups in the Northern Balkans and Eastern Europe also fought with Rákóczi’s army.

A series of moving historical coincidences link the national hero of Hungary Rákóczi with Alexander Ypsilantis:

(a) The first lived his childhood in the castle of Mugats (today’s Western Ukraine) and later fought for it. Ypsilantis was imprisoned in the same castle and lived there the last years of his life.

(b) They both adopted the same slogan. FIGHT FOR FAITH AND HOMELAND.

(c) Rákóczi left Austria-Hungary after being defeated. In 1717 he went to the Ottoman Empire. The following year Austria and the Ottoman Empire signed the Treaty of Pasarovic, under which the Austrians asked the sultan to extradite Rákóczi. The sultan refused Austrian’s request. The same happened in reverse, when Ypsilantis went/fled in Austrian territory and under the same treaty, the Turks asked to hand Rákóczi over to them. The incident with the Hungarian revolutionary was the excuse for Austria not to hand over Ypsilantis to the Turks.

Rákóczi is a national hero in Hungary and the great Hungarian composer Franz List composed in his honor the Rákóczi procession, which is the unofficial anthem of Hungary.

The Philhellenism Museum has an important document dated in 1790. It is a letter sent by the French ambassador to Istanbul, Choiseul-Gouffier, in Austria. He had rescued a Hungarian noble officer, de Saint Jvani, from certain death in Turkish prisons, and after he recovered, the French ambassador tried to flee him to Trieste. It is reminded that Choiseul-Gouffier is the Philhellene author of the important work ‘Travel to Greece’ (‘Voyage Pittoresque sur la Grece’) and later, the president of the Greek-language Hotel in Paris. Ιt was the first secret organization for the liberation of Greece. 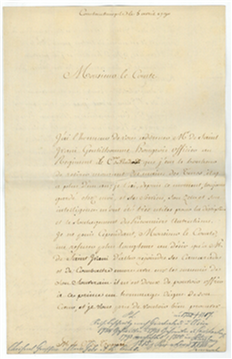 We recognize the common fate and the struggles of the two countries for their freedom.

In 1820, the Hungarian nobleman Szechenyi visited Greece. He  admired the ancient Greek civilization, but also expressed his sorrow for the sufferings of the enslaved Greeks.

And we now come to the Greek Revolution.

The struggle of the Greeks moved the Hungarian people, who had contact with the action of the Greeks in Austria-Hungary, from the work of the Bishop  Ignatius of Hungary, Anthimos Gazis, from the Society of Philomuses in Vienna, Hermes Logios, etc.

From 1821 onwards, many Greek refugees found refuge within Hungarian territory, while in the spring of 1824 Count Laszlo Festetich delivered an enthusiastic speech to the Hungarian Parliament in favor of the Greek cause.

The Paradicsom cafe in Pest was, together with the University of Pest, the fermentation points between Greeks and Hungarians, and the centers of dissemination of Greek positions. The Greek-Hungarian legion was gradually organized there, aiming to sending volunteers to Greece.

Many Hungarian volunteers came to Greece. First they were present in the battle of Peta. 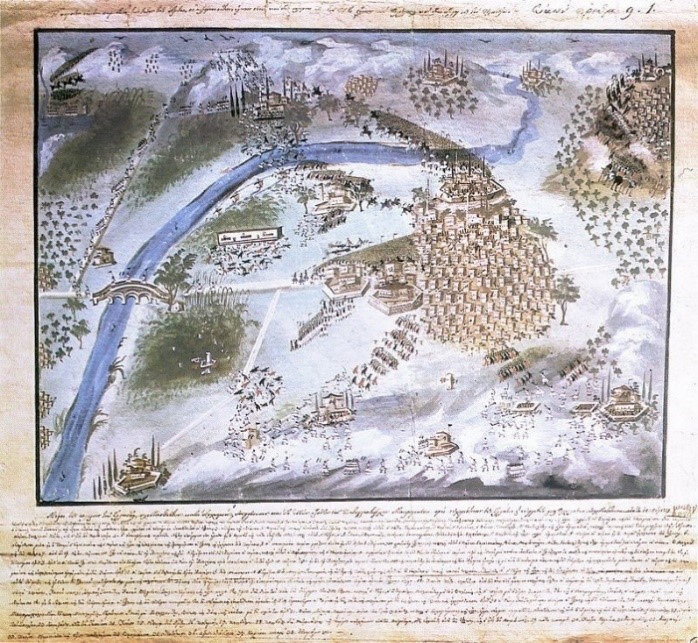 Representation of the battle of Peta. Work of Panagiotis Zografou, commissioned by General Makrygiannis (EEF Collection / Museum of Philhellenism).

Dobronoki, Emeryk (-1822). Polish Philhellene of Hungarian descent from the town of Dłużniewo (near Płońsk) or Suwałki. He came to Greece in February 1822. He served in the 2nd Corps of the Battalion of Philhellenes as a lieutenant and fell heroically in the battle of Peta on July 4, 1822. He is also incorrectly referred to as “Tabernocky”.

Descheffy, Karl von (-1822). Hungarian Philhellene. Also referred to as “Doeschessy” and “Deschettis”. Lieutenant of the Austrian Army during the Napoleonic Wars. Via Livorno, he arrived in February 1822 in Messolonghi. He served as an officer in the Infantry Regiment of the Regular Army. He fell heroically in the battle of Peta on July 4, 1822.

Radice or Radics (name unknown). Hungarian Philhellene. He arrived in Greece via Constantinople. Soldier of the German Legion since April 1822. His participation in the battle of Peta on July 4, 1822 is not testified.

However, many Hungarian Philhellenes also participated in many other phases of the Greek struggle.

Christotulo and Georg (name unknown). They fell heroically during the siege of the Acropolis of Athens on May 6, 1827.

Jeremias, Janos. He participated in the Greek Revolution. At the end of the National Uprising, he settled permanently in Greece. He retired in 1859 as a civil servant of the Greek state.

Lasso or Lasky, Christoph was a Hungarian volunteer from Budapest. He came to Greece in 1826 and was enlisted in the Regular Army. He fought in the battle of Haidari on August 6, 1826 and took part in the siege of the Acropolis of Athens. He fell heroically in the battle of Analatos on April 24, 1827.

Another Hungarian, Marc (of unknown name), was also killed in this battle.

Especially important is the story of a Hungarian Philhellene who came to Greece with his son.

Mangel or Mankel, Ernst. Hungarian Philhellene from Pest or according to other sources, from Transylvania. He came to Greece in 1822, with his son Michael Ernst Mangel. He participated in many battles and was wounded many times. He took part in the first siege of the Acropolis (as a messenger), in the battle of Dervenakia, in the siege of Nafplio (1822), in the military campaigns of Karystos, Chios, as well as in the battle of Haidari. He organized the first Greek military band that cheered the Greeks and Philhellenes up, before each battle. It has to be emphasized here that the military band was a central element of the operation of the regular army of the time. He was then appointed chief musician in the Greek Army. After the National Uprising he lived in Athens. He had a total of 22 children. Today many of his descendants live in Greece and in other European countries.

Mangel, Michael Ernst (1800-1887). He came to Greece with his father Ernst Mangel. After the Revolution he served as a major in the Greek Army and lived in Athens, where he died in January 1887. He was honored with 3 medals of outstanding deeds (Struggle, Bravery and the medal of the Redeemer). His son was a judge in Thebes in 1881. Today many of his descendants live in Greece.

Moreover, Hungarian artists also honored the struggle of the Greeks. One of them is Adalbert Schaffer. An important painting of his can be found today in the Philhellenism Museum in Athens.

In 1926 in his book “Szittya-görög eredetünk”, he wrote, among other things:

1) “The Hungarian language has three thousand word roots, which are identical to the Greek ones”.

2) “The ancient Greek texts, the texts of Byzantium and Scythia are identical”.

3) “Some of the words, when written, are surprisingly similar”.

“All over the world, except for the classical ancient languages ​​(Greek and its “child “, Latin), only in Hungarian can poems be written in classical hexameter. This is a unique linguistic phenomenon!

(…) In some of the Hungarian folk songs, the melody is old and comes from the Scythian era (meaning the Thracians of the area)”.

The Society for Hellenism and Philhellenism, and the entire Greek people, thank the people of Hungary for their commitment to the values ​​of Greek culture, and their contribution to the Greek Revolution.