The chairman of the US Senate Foreign Relations Committee, Senator Robert Menendez, visited Greece from August 26 to 27, 2021, and Cyprus, on August 30, 2021. He met the Prime Minister of Greece, Kyriakos Mitsotakis and the President of Cyprus, Νikos Anastasiadis.

Senator Menendez has always been a staunch supporter of Greece. In 2019, together with Marco Antonio Rubio, an American senator and lawyer, he launched the ‘East Med Act’ initiative, strengthening the US cooperation with credible partners in the Eastern Mediterranean, such as Greece, Cyprus and Israel. In June 2021, R. Menendez filed a proposal for the bill ‘U.S.-Greece Defense and Interparliamentary Partnership Act 2021’ (‘American-Greek defense and interparliamentary cooperation’) to strengthen the Greek-US defense cooperation. 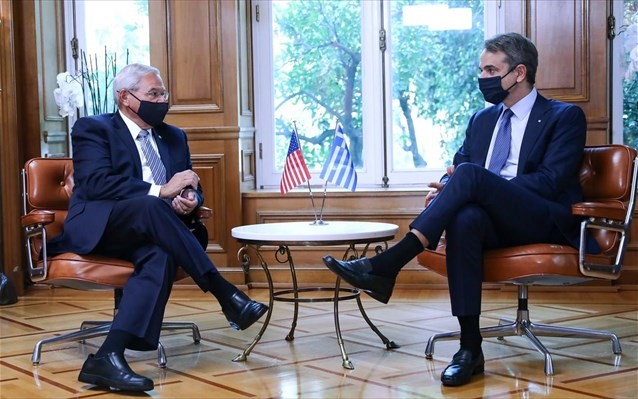 His meeting with the state and government leaders of the two countries deepened the strategic Greek-American relations, sealed the Greek-US defense cooperation, highlighted Greece as a pillar of peace in the Eastern Mediterranean and stressed out that the USA must remain committed to the security and the prosperity of Greece.

The Municipality of Athens awarded the American senator the Medal of the City of Athens, and the President of the Republic, Ms. Katerina Sakellaropoulou awarded him the medal of the Grand Cross of the Order of Honor, with the senator stating:

‘‘It is a great pleasure for me to be here and to receive this special award. To receive it from the first woman President of the Republic. I receive it on behalf of all expatriate Greeks and Cypriots, friends of mine. During the last 30 years they were the ones who helped me and introduced me to many topics of Greek interest. The flame that enkindled in ancient Greece, in the Athenian democracy, is a flame that is worth fighting to keep alive. This applies to both countries’’, he noted. ‘I received many awards and medals in my career; however, I will honor your award forever’’. 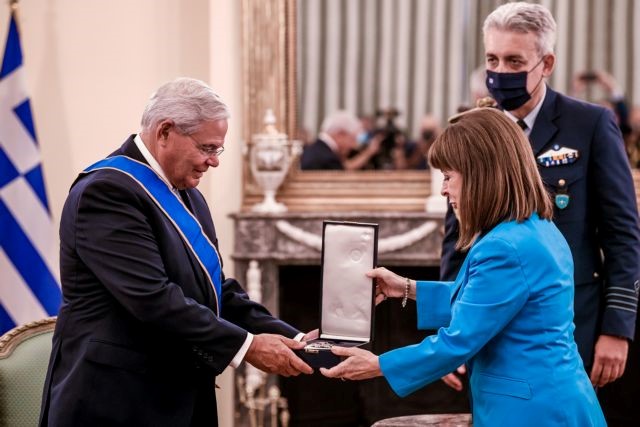 Senator Menendez was honored in Nicosia, Cyprus with the Grand Cross of the Order of Makarios III, by the President of the Republic of Cyprus, for his important contribution to the promotion of human rights, the rule of law and democracy. The award took place during a ceremony at the Presidential Palace, which was attended by the Archbishop of Cyprus Chrysostomos II, the Speaker of Parliament, Annita Dimitriou, the current and former members of the Council of Ministers, members of the diplomatic corps, government officials and party officials, among others. 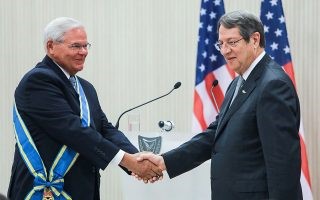 Mr. Menendez referred to his goal “to see the last Turkish soldier leaving Cyprus”. Finally, he suggested the restoration of the human rights and freedoms of the Cypriots, through the resolution of the “Cyprus” issue, on the basis of UN resolutions and the principles of the European Union.