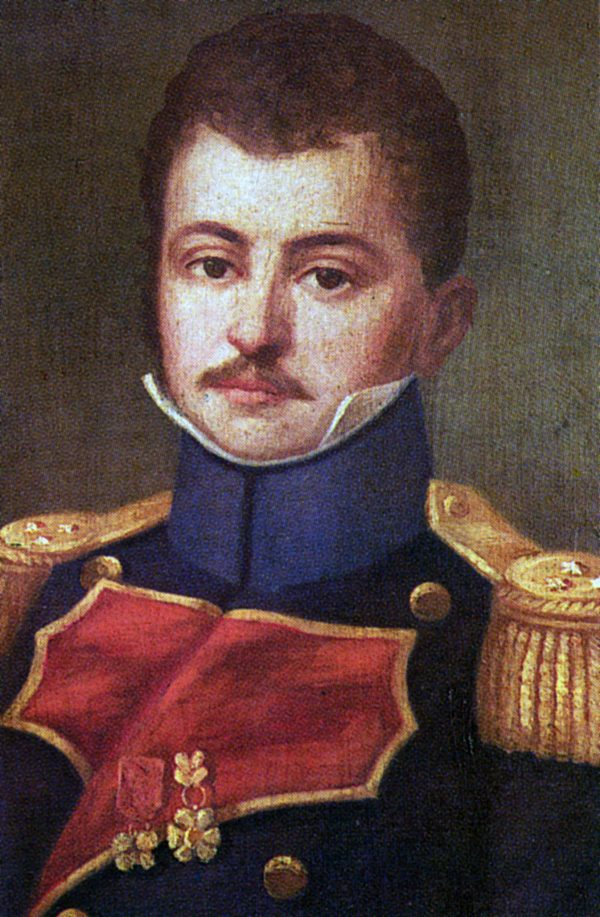 According to French records, Constantine Denis Bourbaki was born in Cephalonia on August 1, 1787 and was later naturalized in France on November 9, 1818. The bibliography usually refers to him as a philhellene of Greek descent.

His father, Konstantinos-Sotirios Bourbaki (Vourvachis), was a sailor and merchant, based in Marseilles. According to Averoff Michelle and her article on the Philhellenes, he was born in Sfakia, Crete, and his real last name was “Skordilis”. The name “Vourvachis” was given to him by the Turks, and meant “the one who beats first” or “the one who is in charge”, since his family was a family of fighters of the island. After the Arcadi Holocaust, the family emigrated to Kefalonia. In Marseilles, Father Vourvachis maintained a relationship with Joseph Bonaparte, which drove him to be selected for a dangerous mission. When Napoleon was in Egypt in December 1798, there was a need to notify him to return quickly to France, where his political opponents had caused unrest. Constantine-Sotirios managed with his ship to alert the emperor in time, without being noticed, neither by the Turks, nor by the English who had imposed a blockade. Since then, the Vourvachi family has become more closely associated with the Bonaparte family, who have taken on the task of protecting the sons of Constantine-Sotirios, Joseph and Dionysius. The latter moved to France after the death of their father.

Dionysios Vourvachis studied at the military school of Fontainebleau, from where he graduated in 1804 and joined the French infantry. He fought in Spain, Italy and Germany and was appointed aide de camp of Joseph Bonaparte when he became monarch of Spain. According to information from his personal record provided by Babis Anninos, who was the son of one of Dionysius’ three sisters living in Argostoli, Cephalonia, Vourvachis was seriously injured four times during his career in the French army, and three times he had received honorable mention for his services. Stefanos Papadopoulos in his monograph on Dionysios Vourvachis in Parnassos magazine, mentions that after Napoleon’s first exile on the island of Elva, Vourvachis resigned from the French army, but returned a little later. In addition, both he and Averoff note that Dionysios Vourvachis was reportedly the one who arrived on the island of Elva with great danger in order to warn Napoleon that his opponents were planning to exile him to a more distant place. So fate brought him to undertake a similar mission to the one undertaken by his father.

After Napoleon’s return, Vourvachis served as commander of the 31st Light Infantry Regiment of the French Army. According to the Greek biographer Henri Fornèsy, he had reached the rank of colonel when he was made redundant by the Bourbon regime. He then submitted his resignation to the French army, which was accepted only in 1820.

Vourvachis was a liberal in his beliefs, and after many adventures, wanderings and duels he was forced to exile himself to Spain, home of his wife Charlotte de Rica, where other Bonapartists had taken refuge. He later returned to France and retired to the small town of Pau.

When the Greek Revolution broke out, Vourvachis was in Paris. Excited by the Struggle for the Freedom of his Homeland, he initially tried to help her through his active engagement within the framework of the Hellenic Committee of Paris. However, the enthusiasm that overwhelmed him after the heroic exit of Messolonghi and his love for Greece pushed him to take part in the armed struggle for its liberation. Other French officers left for Greece with him. With the permission of the French government, Vourvachis arrived in Greece around the end of November 1826, or a little earlier, according to other scholars. He did not come as a simple warrior, but as an envoy of the Philhellenic Committee of Paris. He had money with him, while he was accompanied by other Greek volunteers. At the same time, his work was financially supported by the Corfu Committee, in which the brother of Capodistrias participated. The Commission carried out important work, and in fact systematically purchased Greek slaves from Messolonghi and elsewhere in many parts of the Mediterranean, and released them free in Greece.

When he arrived in Nafplio, Vourvachis obtained permission from the Administrative Committee to form his own Corps consisting of “a large number of Greeks and Philhellenes,” according to Fornèsy. These men were mainly Ionian and French philhellenes. Among them was Andreas Metaxas, his son-in-law. His Corps soon numbered about 800 men and, according to Gravière, was on a mission either to campaign in Western Greece or to reinforce Karaiskakis for the liberation of Central Greece. Vourvachis was devoted to Karaiskakis and to his mission. The main goal of the Greeks and Philhellenes at that time was to maintain liberated various areas in the Peloponnese and Central Greece, so that the issue of the Greek Revolution and the prospect of establishing a free Greek state were constantly on the agenda of diplomatic centers internationally. France supported this strategy, believing that a successful outcome would also strengthen its prestige.

Unfortunately, Vourvachis failed to carry out his plan, mainly because the Administrative Committee did not supply the Corps, and he was forced to buy his own food to support his men. The conditions were not good and so many of his men began to desert. In addition, many, including Makrygiannis, opposed Vourvachis as they disliked his son-in-law, Metaxas, and Kolokotronis, who were considered Russophiles. At the same time, Vourvachis was particularly troubled by a civil strife and conflicting interests.

Vourvachis left for Central Greece with the aim of meeting and coordinating with Karaiskakis, and now cooperating with him. To achieve this, he often ignored the orders of the Administration. After a fourth letter by the government, he decided to change course and head to Athens. The appreciation and love he nurtured for Karaiskakis emerges from a letter addressed to him during the controversial period, in which he states: “Chief! … I am always under your instructions, and ready to run wherever you deem me worthy to the benefit of our homeland. Your brother Vourvachis”.

The signature of Vourvachis from a  letter

In any case, everyone, from all sides, agreed that Vourvachis was an honest, selfless and pure patriot who was thirsty to see Greece free. Eventually, the Administrative Committee canceled his pursuit, and ordered him to go to Eleusis to reinforce the siege of Athens.

So at the end of 1826, he arrived in Eleusis. There, he met Vassos Mavrovouniotis, and in a few days Panagiotis Notaras also arrived. From Eleusis, Vourvachis and the two chiefs, with their forces united, moved to Menidi, where on January 22 they successfully clashed with Turkish forces.

On January 25, Vourvachis, along with Mavrovouniotis and Notaras, and 3,500 men, headed for Kamatero. At this point, two days later, they were attacked by 2,600 Turks. In the ensuing battle in Kamatero, there was a disagreement between the three leaders of the troops who were operating, regarding the tactics of the battle. Vourvachis, anticipating the frontal attack, encamped with his Corps in the plain as a kind of vanguard, while the bulk of the army remained on the hills, a little further away from him. The forces of the Greeks and Philhellenes were equivalent to those of the Turks, the plan was right and they would have succeeded if discipline prevailed. But the irregular forces of the Greeks feared the Turkish cavalry. Also, the lack of discipline of the Greek irregular soldiers, led once again to tragic results. Without discipline, it would have been impossible to implement a battle plan. This problem cost the Greek forces a lot, in many battles. And two months later, the same problem caused another painful defeat in Analatos and the death of the great fighter, General Karaiskakis.

When the attack of the Turkish forces began and the cavalry appeared, the irregular Greek fighters abandoned their positions and advanced towards the surrounding hills. So they left the Vourvachis Corps at the mercy of the Turks.

The battle was fierce, but the Greek and Philhellene Corps of Vourvachis had been besieged, and the struggle had become unequal. The three hundred men of Vourvachis, after fighting valiantly, were all slaughtered. Some Greeks fell alive into the hands of the Turks. Two Frenchmen, a German and the wounded Vourvachis. It is even said that especially for him, Turkish riders competed fiercely with each other, who would immobilize him to take as a prize a precious stone that adorned his yataghan (sword).

Admiral De Rigny, who was in the area, asked Kioutachis to respect the prisoners and accept to exchange them with Turkish prisoners. Kioutachis refused, ordered the beheading of all the Greeks and sent them to the Sultan with their uniforms, the helmet of Vourvachis, a 68-liter missile fired at the Turkish camp by the steamship “Karteria” that was operating in the area and was supporting the Greek forces and bread kneaded from American flour distributed by the frigate “Hellas” to the Greeks.

Kioutachis wanted to show in this way that he defeated an army that was strengthened, fed and commanded by foreigners, and mocked the Philhellenes and Philhellenism. This barbaric and foolish act angered French officials and the international community.

The tragic end of Vourvachis and his heroic death on January 27 / February 8, 1827, at the age of just 40, infuriated Admiral De Rigny, and as he pointed out to the Turks, he rekindled the philhellenic movement throughout Europe.

Thus, this great Greek served honestly and bravely both France (where he was called “Captain Graikos”) and Greece, and with his heroic death he honored both his homelands and their common values.

In France, his son Charles-Sotirios Vourvachis continued the glorious name of the family, as he later excelled as one of the bravest generals of Napoleon III.

Dionysios Vourvachis was honored in France with the award of the Legion of Honor, on December 27, 1814. Today, two streets in Kefalonia and Kamatero, bear his name, while the municipality of the region sometimes organizes competitions in his honor (“Bourvachia”). Dying, Dionysios Vourvachis uttered the name of the Acropolis for which he sacrificed everything, even his life. That is why a street in Athens that leads to the Acropolis has taken his name to remind us of this great hero. His heroic death will always remain indelible in the history of the liberation of Greece. 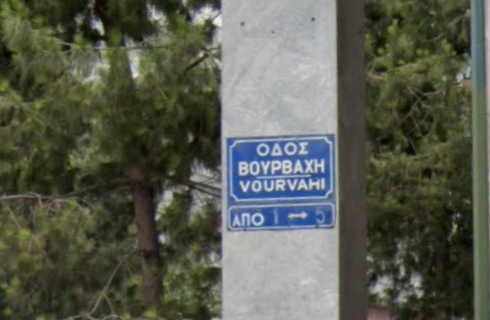 Vourvachi street at the corner with Syggrou Avenue

Important poll: What do Greeks think about the role of the Philhellenes during...
Scroll to top