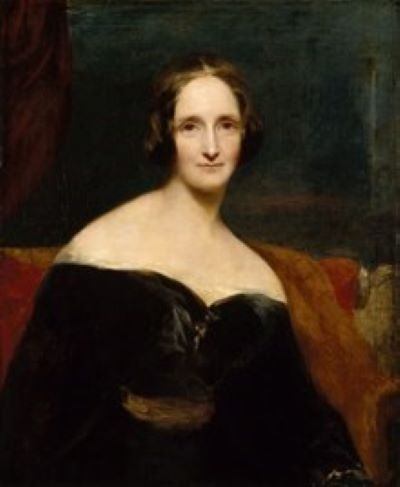 Mary Shelley (1797-1851) is best known as the author of the classic horror novel Frankenstein or Modern Prometheus (1818), and as the wife of the romantic poet Percy Bysshe Shelley. Less known is her moral support to the Greek Revolution and her mental identification with the struggle of the Greeks for Independence. She participated in the ideological and political developments around the so-called “Circle of Pisa”, had a personal friendship with Alexandros Mavrokordatos, and influenced Lord Byron’s philhellenic attitude and his decision to go to Greece and identify with the Greeks.

She was born on August 30, 1797 in Somers town, Camden Town, London, and was the daughter of the anarchist philosopher William Godwin (1756 – 1836) and the early feminist Mary Wollstonecraft (1759 – 1797), who died a few days after giving birth to her daughter. Mary grew up with two half-sisters; the three years older than her, Fanny Imlay, from her mother’s former relationship with Gilbert Imlay, and Jane or Claire, from Godwin and his second wife, Mary Jane Clairmont. Mary is referred to as Godwin’s favorite daughter, with whom she had a special relationship. Her father took exclusive care of her upbringing and home education. On the contrary, her relationship with her stepmother was problematic. As a child she loved to study and write her own stories.

William Godwin was the spiritual teacher of the poet Percy Shelley, who visited Godwin’s home frequently from 1812 and even supported his mentor financially. It was there, where Shelley met Mary, at a time when his marriage to Harriet Westbrook was in trouble. Soon the two of them began meeting secretly near the grave of Mary Wollstonecraft. When Godwin, enraged by the news, forbade Shelley from visiting them, the couple left for France accompanied by Mary’s sister, Claire (July 28, 1814). From there they arrived in Switzerland. Shortly afterwards, Claire met Lord Byron and entered into a relationship with him. Byron became a member of their inner circle in Geneva during the Shelley’s second voyage in 1818.

A series of tragic events followed. Pregnant Harriet Westbrook committed suicide, as did Mary’s half-sister, Fanny Imlay. Also, two of the children that Mary and Percy had in the meantime, died (William 1816-1819, Clara Everina 1817-1818). Their third child, Percy Florence Shelley (1819-1889) survived, while Mary lost another child from miscarriage in 1822. These losses stigmatized her soul and found their expression in the motifs of birth / death/ renaissance, on which her best-known work, Frankenstein (1818), is based.

The trigger for Frankenstein’s composition has been given to Shelley by Lord Byron, while they lived in adjoining houses on Lake Geneva. One night, while having fun with “ghost stories”, Byron suggested that each of them wrote a short horror story. Mary ended up writing much more than just a short story. The group of friends was accompanied by Dr. John William Polidori (1795-1821), author of “The Vampire”, who inspired the “vampire literature” of many authors.

The Shelleys returned to England, where they still felt unwanted in their old environment. So they left again for Italy, together with Claire (March 11, 1818), who had meanwhile given birth to Byron’s daughter, Alegra, and wanted to meet him in Venice. Their travel destinations were the Italian cities of Florence, Rome, and finally Pisa, from where Percy often traveled to Livorno and Lucca.

Pisa was the milestone in the rise of both Shelleys’ philhellenism. A collective identity for the Greek intellectuals was forged in this city. There they came in contact with the so-called “Circle of Pisa”; a group of people gathered around the Metropolitan of Hungary, Ignatius, who sought to play an active role in Greek affairs. Among the people around him was Alexandros Mavrokordatos, who was hosted at Ignatius’ house, together with the ruler of Wallachia, Ioannis Karatzas, and his son, Constantine. Their “turban-bearer” friend, as Percy Shelley called Mavrokordatos, began to influence the couple in his own political line. Mary seems to have developed a special relationship with him, as evidenced by a series of unpublished letters they exchanged. When they heard of Pruthos’ passage by Ypsilantis, she and her husband Percy wrote two letters to English newspapers in support of the Greek Revolution. In this way they took a public position in their homeland in favor of Greece.

During their stay in Pisa, Percy composed “Hellas”, his masterpiece poem, in which he envisioned Greece’s rebirth. He dedicated the poem to Mavrokordatos, and probably introduced Byron to him. The developments that took place between Shelley – the circle of Pisa – Byron, resulted in the transmission of the couple’s enthusiasm for the Greek Cause in Byron, who was still focused on the Italian revolutionary movement of the Carbonari. Apart from Greece, the three of them also developed an interest in Istanbul.

Mary wrote with passion about Greece and made sure to be informed through her circle about what was happening in Greece and Istanbul, as well as about the Turkish retaliation against Greeks. On April 10, 1822, the day Percy received a copy of his newly printed work, “Hellas”, Mary wrote to a friend about the massacre of 4,000 Greeks in Constantinople. At the same time, the head of the dead Ali Pasha had been sent to the Sultan after his death. Mary narrated the events of the war that followed between the Greek and Turkish fleets, and enthusiastically realized that the inhabitants of Moria were well acquainted with the famous phrase of Spartan women “This, or on this” ( Ή ταν ή επί τας). In her diaries she often recorded the conversations she had with Mavrokordatos, and most of her entries began with the admonition to herself to read Greek. Her teacher in learning Greek (“it is difficult but so richly rewarding”) was her husband, Percy. In a letter from November 30, 1821, she mentions the promise she made with Percy to travel or even move to Greece, if Greece shall be free.

Shelley’s dream did not come true. The premature death of Percy Shelley on July 8, 1822 marked another tragic loss in the life of Mary, who had since become the guardian of his work. The couple’s friend, adventurer Eduard John Trelawny (1792-1881) removed the heart of his dead friend to hand it over to his widow. The manners of the time did not allow her to attend his cremation ceremony.

In February 1826, Mary published her darkest work, “The Last Man”, an alloy of science fiction and gothic novel, in which she described a nightmarish, dystopian future. During a Greek effort to reconquer Constantinople, an epidemic breaks out and devastates the future world. The only survivor is the storyteller, Lionel Verney, who describes his life before and after becoming “The Last Man”. The main character of the novel is the romantic idealist Adrian, Earl of Windsor, who is motivated by his charity and selflessness; Mary succeeded in immortalizing her beloved Percy in literature. Another character of the novel is the ambitious nobleman, Lord Raymond, who is fighting on the side of the Greeks against the Turks. It is clear that Mary Shelley is remembering her friend, Lord Byron. It seems that for the author, the end of the world included a company of Greeks who were fighting for the Greek cause.

The “last man”, Lionel, is none other than the author herself, who has experienced the loss of every loved one. A few days after Byron’s death (May 14, 1822) she described her feelings of loss, as “the last remnant of a beloved tribe”. With this work she tried to honor and immortalize her time and companions.

After Percy’s loss, she did not remarry, despite proposals by the writer Prosper Mérimée or the playwright John Howard Payne. Her wish was that her tomb bears Mary Shelley, as she told her friend Trealawny. She spent the rest of her life as a devoted mother of Percy Florence Shelley and a daughter of Godwin, whose health was in poor condition. From 1838 onwards she suffered from paralysis and headaches, to the point that she could not read or write. She died on February 1, 1851, most likely from a brain tumor and was buried with Percy’s heart in St Peter’s Church in Bournemouth, near Dorset. A memorial sculpture for the Shelley was commissioned at Christchurch Priory in Dorset County by Percy Florence Shelley and his fiancée Jane Shelley. The monument depicts Mary mourning her dead husband. 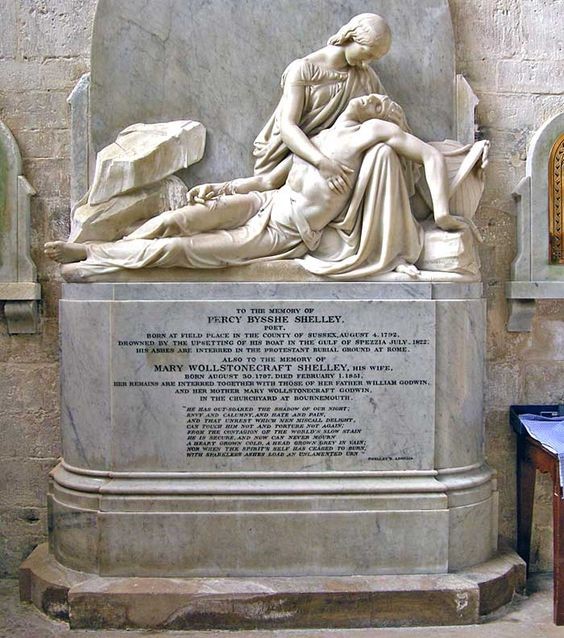 Mary Shelley’s life was the scenario of a movie film. You may watch here the trailer.

SHP and the Greek people honor this passionate Philhellene, who fought to promote the rights of Greece and inspired Lord Byron to identify himself with the Greek Revolution.

Michalis Tiberios, member of the Academy of Athens, participates in the Advisory...
Scroll to top