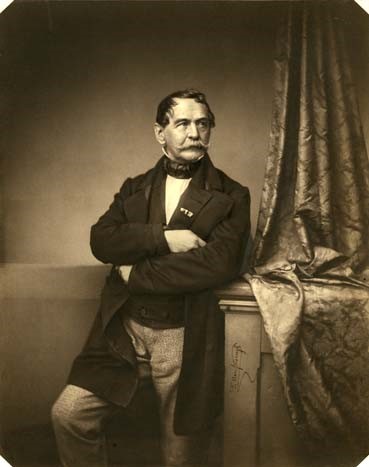 The German painter Peter von Hess (1792-1871), was a much-loved person of Ludwig I. of Bavaria, a central figure among his envoys during the Greek Revolution. Τhe famous, “cinematic” depictions of the heroes and battles of 1821 are of his own. He artistically captured central events of the Struggle, passing on an important artistic exhibit to future generations and setting a model for both his compatriots as well as a number of Greek painters; the representatives of the so-called “Munich school”.

Peter von Hess was born in 1792 in Düsseldorf and was the son of the copper engraver Carl Ernst Christoph Hess (1755 -1828), with whom he received his first artistic lessons. Already at the age of 8 he creates his own engravings with animal figures. In 1806 he was admitted to the Academy of Arts in Munich. In fact, he is a self-taught painter, as he soon stopped studying in Munich and preferred to develop himself as an artist, taking Dutch and German painters as his role model. The Dutch influence is evident in his ethnographic themes, especially in those relating to Italian and Greek life. He was also influenced by the painter Wilhelm von Kobell (1766-1855), therefore turned to the composition of war scenes, drawing his material from his experiences on the battlefields, between 1813/1815. He had served in the military staff of General Carl Phillip von Wrede (1767 – 1838), whom he accompanied during the Napoleonic wars (Befreiungskriege), as well as at the Congress of Vienna (1815). 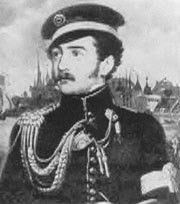 Peter von Hess in the uniform of an officer.

During these years, young Hess exercised as a war scene painter and created various sketches, which later became the basis for his oil paintings. An example of such a war scene is the “Battle of the Nations in Leipzig, 1813”, which he painted in 1853 (“Die Völkerschlacht bei Leipzig 1813”).

Between 1816 – 1817 he traveled to Italy and mainly painted landscapes and scenes with “Italian themes”. He moved away from Kobell’s influence and discovered a more personal, plastic idiom in his art. In the 1820s he began to gain recognition as a painter of the Bavarian court. In 1824 he co-founded the Münchner Kunstverein (Munich Art Association), which developed into a Munich urban art forum. Bavarian king Ludwig I. commissioned him to illustrate the Arcaden of his garden in Munich with scenes from the Greek Liberation Struggle. He had already begun to become acquainted with Greek subjects in Bavaria, before painting “Palikars in Athens” (1829, today at the Nationalgalerie in Berlin), and then the lithography of Krazeisen’s work on “Chieftain with his Palikars in battle”. 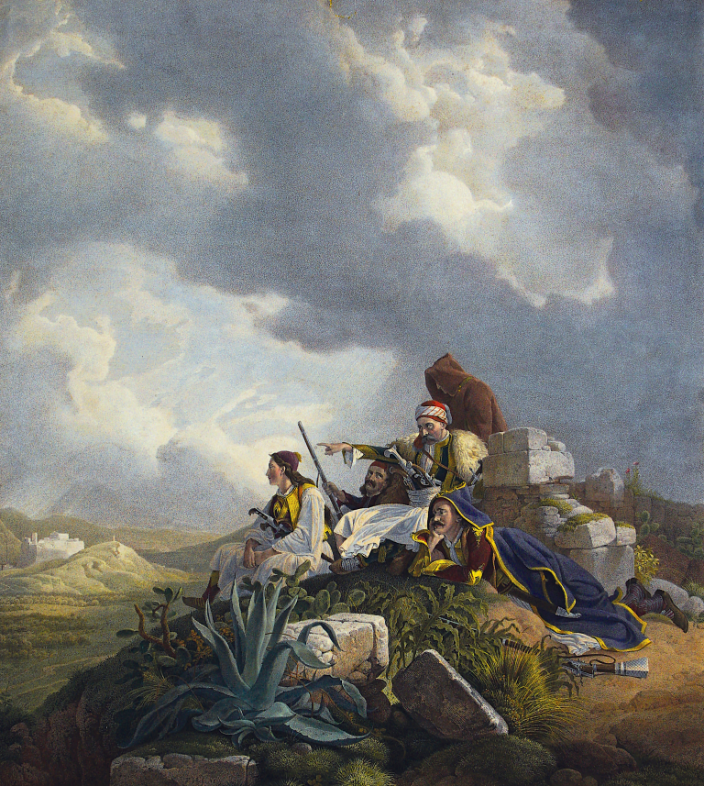 Lithograph of Peter von Hess, based on Krazeisen’s work titled “Chieftain with his Palikars in battle” (SHP collection).

In order to complete his compositions he relied on his imagination as well as on journalistic correspondence from Greece, as did his fellow artists (engravers and painters) who had not yet visited the country.

The creation and lithographic reproduction of imaginary depictions of the events of the Revolution, filled journalistic gaps and acquainted Europeans with Greek reality, even in the occasionally idealized version of it.

Some of these artists took the initiative to visit Greece at their own expense and the risk of their lives, in order to base their works on personal experiences. A number of other artists, including Ferdinand Stademann (1791-1873), Carl Rottmann (1797-1850), Ludwig Lange (1808-1868), came to Greece enjoying financial support by Ludwig I. His beloved painter, Peter von Hess, was one of his protected envoys to Greece, commissioned with the creation of “journalistic” works, which would contribute to the consolidation of Bavaria’s ties with the newly built Greek state and propagate the valuable historical lesson offered by Greek fighters to his Bavarian and European compatriots. The artists mentioned above created works inspired by the romantic spirit of the time and following the principles of academic realism.

In 1833 Peter von Hess traveled to Greece with Otto. He depicted – as Ludwig had wished – “The arrival of Otto in Nafplio” (Einzug König Ottos von Griechenland in Nauplia, 1835), which documents the establishment of a European Greek state. Bright colors dominate the landscape, while the painting realistically depicts the costumes of the crowd, to convey the joy of the event to the viewer, whose gaze very cleverly leads Hess to the empty space in front of his composition, right where Otto, the central figure of the composition, is about to pass. Along with “Reception of King Otto of Greece in Athens” (Empfang König Ottos von Griechenland in Athens, 1839), these are his best known works, on display at the New Gallery in Munich.

Peter von Hess’s art is characterized by the faithful rendering of details, the tendency for an idealistic presentation of the figures (as an external expression of the inner kindness of the people he depicts), and the description of historical events. He is a very strong colorist, who prioritizes color over form. He edits human figures with great care in his attempt to describe the mental characteristics of his heroes. The lines of his figures are usually bold, especially when describing naked human members. He is inspired by monumentality, large forms in motion and contrasts, which underline the intensity of all the dramatic events that unfold before the eyes of the spectator. His direction often appears cinematic, an impression intensified by his diagonal compositions, which emphasize the movement and action of his heroes.

His most important work to honor the Greek War for Independence is the creation of 39 images from the Revolution, in which he immortalized the figures of heroes in our memory. Even if Hess did not meet the heroes of 1821, he made sure to rely on the descriptions of ordinary people in order to reconstruct them as truthfully as possible. He respected folk descriptions and combined them with his romantic beliefs: he depicted Bouboulina in the heroic-mythical type known to us until today, leading the fight with her outstretched, right hand, or Androutsos in a way that reflects his courage and determination – his main characteristics that were known to everyone at that time. The first illustrator of the Struggle was Panagiotis Zografos, who designed a series of 25 paintings with the instructions of Makrygiannis. His works followed a naive, post-Byzantine tradition, which established a folk visual art that focused on the description of events. On the contrary, Peter von Hess’s Oeuvre had an epic, romantic character, which he projected on the Greek fighters. Such artistic choices established him as the main illustrator of the Greek Struggle. Both artists offered sufficiently realistic depictions of the historical events.

The paintings of the Greek Revolution were intended to be displayed in the north portico of the Royal Garden (Hofgarten). Hess’s chalk-painted drawings on white cardboard were the basis for the transfer of these scenes to the galleries between 1841 -1844. His paintings were unfortunately destroyed, but his pictures were spread through lithographic reprints and many painters copied them.

Hess listed his 39 scenes from the Greek Revolution following the true historical succession of events. The only “fantastic” depiction is the first scene with Rigas Feraios “sparking the love of the Greeks for Freedom”. In his compositions he has included an impressively large number of fighters of the Revolution with the most famous heroes among them (Alexandros and Dimitrios Ypsilantis, Germanos III of Old Patras, Athanasios Diakos, Gregory V of Constantinople, Petros Mavromichalis, Bouboulina, Odysseas Androutsos, Karaiskakis, Nikitaras, Markos Botsaris, Makrygiannis, Gouras, etc.). He also lists a series of other events of the Revolution, possibly less known today, in a way that makes the viewer feel like he is watching a scene from a movie. For example: “Georgakis and his people blow up in Sekko”, “Kefalas raises the flag of Freedom at the walls of Tripoli”, “Panourgias takes Acrokorinthos”. He painted lesser known moments and people of the Revolution, he is therefore to be thanked for this valuable contribution.

Among the 39 scenes some of them stand out, e.g. “400 Hierolochites fall in Dragatsani”. In this beautifully directed scene, the youthful and idealized figures of the Hierolochites are in contrast with the generic depictions of Ottoman conquerors. The heroic fighters are linked to ancient Greeks or European figures. Hess’s Philhellenism is evident here, as well as a specific ideological program, which aims to validate the kinship ties between Greece and Bavaria. Close to this ideology, Hess dedicates the last three images of the series (nos. 37-39) to the Greek-Bavarian bond: “Kolettis announces Otto’s election as King of Greece”, “The Greek envoys in Munich offer submission to Otto” and “ The arrival of Otto in Nafplio ”. The three Greek representatives (Miaoulis, K. Botsaris, Plapoutas) portrayed by Hess in the second work of the last section, also appear in the work of Philipp Foltz, “King Otto of Greece bids farewell to his family” (New Gallery of Munich).

He completed above images on his return to Munich. He made a second trip to Greece and undertook the decoration of the main hall of Otto’s palace (the current Parliament building), with copies of these scenes. A fire on December 24, 1909 destroyed them. Some copies of his subjects are in the Bayerisches Armeemuseum in Ingolstadt, as well as in the National Bank in Athens. The latter were created in 1900 by the painter Nikolaos Ferekidis, under the direction of the then governor of the National Bank, Stefanos Streit.

Hess established “art historiography” in Greece. The Greek painter Theodoros Vryzakis (1814-1878) was strongly influenced by him in the selection and elaboration of his subjects. Vryzakis studied with him (1841) and is considered the founder of the “Munich school”. The Greek academic painters Nikiforos Lytras (1832-1904), Konstantinos Volanakis (1837-1907), Nikolaos Gyzis (1842-1901) and Georgios Iakovidis (1853-1) also studied in Munich. Gyzis remained in Germany to teach at the Academy of Munich. The Bavarian influence also led to the establishment of the “School of Arts” (1836-1837) in Athens and thus an artistic, national school began to establish for the first time in Greece.

In 1839 Hess went to Russia, where he painted eight large paintings of the war events of 1812, on behalf of Tsar Alexander II. He died on April 4, 1871 in Munich, where his grave is located.

Greek priest lays a wreath at the tomb of Peter von Hess.

While still alive he was honored in 1861 with the Cross of the Knight of the Order of Value of the Bavarian Crown. He was also honored by the Order of St. Michael (Verdienstorden vom Heiligen Michael, 1838), the Bavarian Maximilian Order for Art and Science (Bayerischer Maximiliansorden für Wissenschaft & Kunst, 1853), but also with foreign medals (Belgischer Leopoldsorden).

Hess was a person of high prestige for Ludwig I., a pillar of his strategic plans in Greece. As such he is honored by the painter Wilhelm von Kaulbach (1805-1874) in his series of paintings on the revival of arts in Bavaria, alongside with the German painter Peter von Cornelius (1784-1867) and the German architect Joseph Daniel Ohlmüller (1791- 1839), which are housed in the New Gallery of Munich. 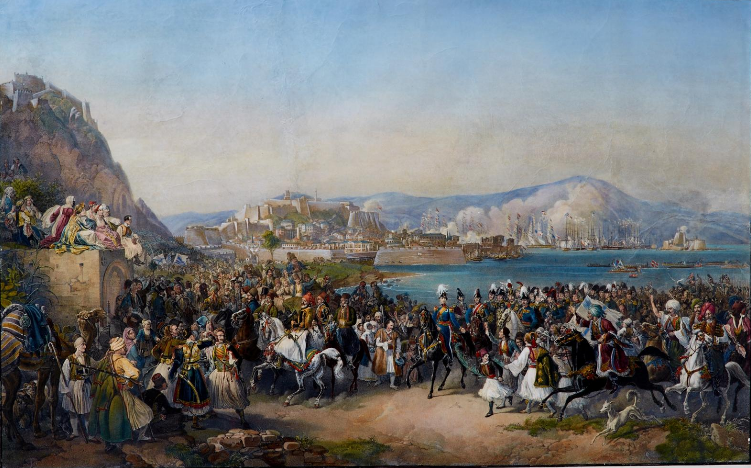 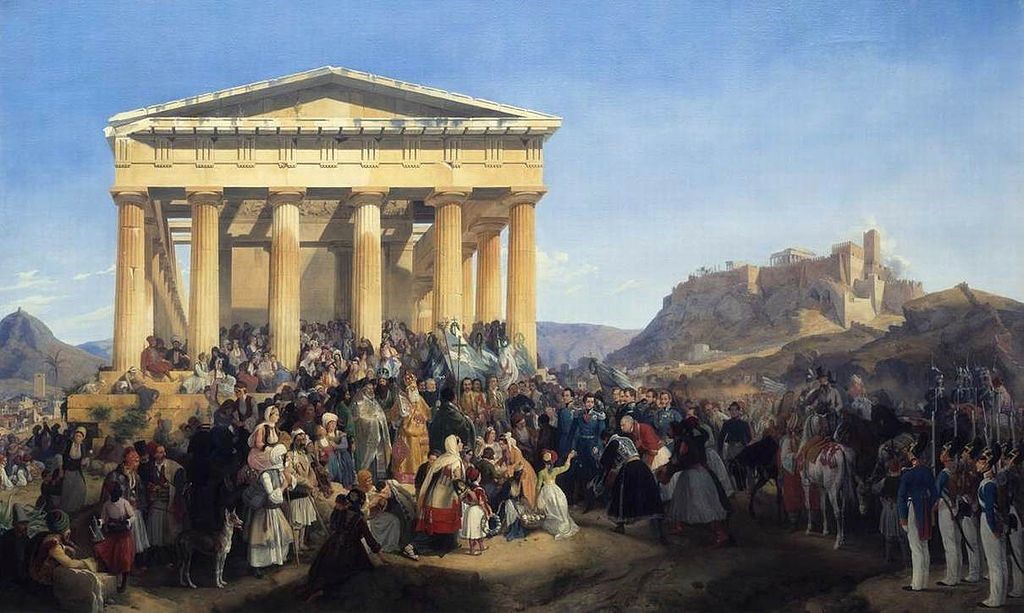 Peter von Hess, “The Entry of King Otto of Greece in Athens”, oil on canvas. 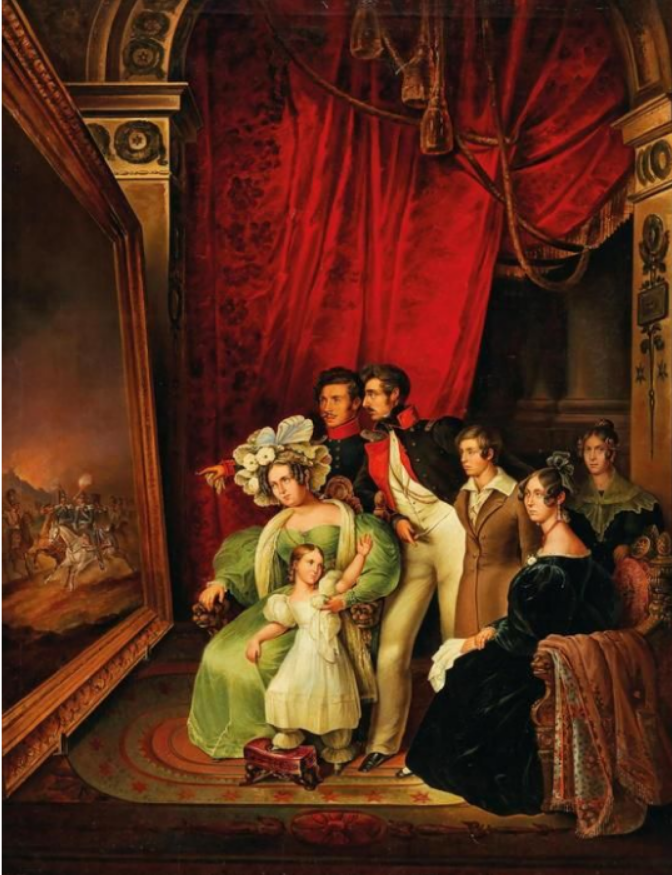 Unknown painter, “the royal family of Bavaria admires the work of Peter von Hess The arrival of Otto in Nafplio on January 25, 1833”, oil on canvas (SHP collection). 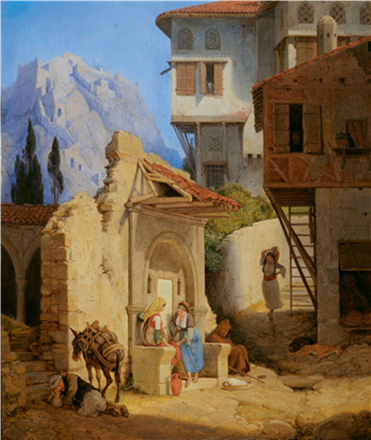 SHP and the Greek people will always honor and remember Peter von Hess as the Philhellene romantic illustrator of the Greek War of Independence.

Michalis Tiberios, member of the Academy of Athens, participates in the Advisory...