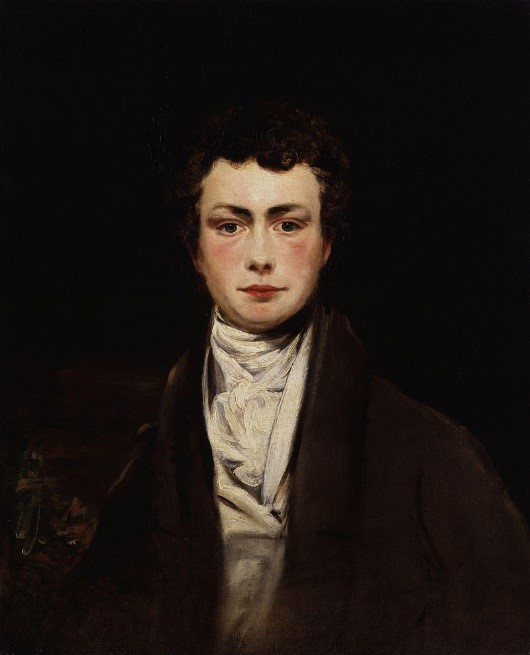 Thomas Moore (1779-1852), was the most famous Irish poet of the first half of the 19th century. He was a Catholic patriot and a supporter of the Whigs in Great Britain.

In addition to his work as a poet and writer, he was a musician, and a “squib” writer for newspapers. He became known by the nickname “Anacreon Moore” after the famous lyric poet of the antiquity. He was one of the first members of the Philhellenic Committee of London, and a friend of Mary Shelley and Lord Byron. In fact, Lord Byron (1788 – 1824) had handed over his memoirs to him to publish after his death. Moore considered it right to burn them so as not to tarnish the great romantic poet’s reputation. Willing to make up for the loss of the memoirs, he composed his own biography of Byron, having Mary Shelley (1797 – 1851) as a valuable source and help. He became widely known for his “Irish Melodies”, which conveyed themes from life in Ireland. With this work he helped to develop a distinct poetic tradition in English language in his homeland, which until then was expressed in Gaelic; he was established as the “national bard” of Ireland. Moore was a passionate advocate of Freedom in his homeland.

He was born on May 28, 1779 in Dublin. He was the only son of Catholic parents, who according to the political situation of the time did not have the right to vote, to hold important positions or to be jurors in courts, to carry weapons and to attend good schools. His mother was a brave woman, who encouraged him to cultivate his artistic side and fight against the “yoke of his Catholicism”. Moore considered Catholicism to be the national religion, central to the Irish national identity. He was probably however rather inconsistent as a Catholic, already as a student at Trinity College, a cheerful spirit that loved everything Protestants disliked: music, theatricality, humour.

In 1795 he started studying law at Trinity College, with Robert Emmett and Edward Hudson as his classmates, who were members of “The Society of the United Irishmen”; a group of sworn fighters in the Kingdom of Ireland who opposed British rule and aimed at “equal representation of all peoples in a national government”. Thus Moore was gradually introduced to the political processes of his time. In 1796 the attempt of the French Republic to support the outlawed United Irish by invading Ireland failed. Although not a sworn member of the “United Irish”, such as Hudson and Emmett, Moore was accused of provoking mutiny for writing a text in which he invited his classmates not to support the forthcoming Union Act. He was later acquitted of the charges, and abstained from any involvement in the Irish Revolution of 1798; he moderated his tone as a writer, choosing humour and parody.

In 1799 he moved to London, where he translated poems by Anacreon. He dedicated “Odes to Anacreon” (1800) to the Prince of Wales. At this time he began to emerge socially, singing for the aristocracy and literary circles. In 1801 he decided to publish his own poems, which dealt with lighter issues. He then travelled to Virginia, USA, and Bermuda (1803) and wrote his impressions in “Epistles, Odes, and Other Poems” (1806), in which he criticized Americans for defending slavery. When the “Edinburgh Review” critic Francis Jeffrey, called Moore “the most licentious of modern versifiers”, Moore challenged him to a duel, which was finally cancelled. Lord Byron, who had also been harshly criticized by Jeffrey, satirized the duel, a fact which annoyed Moore. The misunderstanding between Byron and Moore was however resolved with the intervention of Samuel Rogers, who brought the two men in contact in November 1811. Since then, a friendship developed between the two poets that lasted over time.

That same year, Moore married the Protestant actress Elizabeth “Bessy” Dyke, with whom he settled in London. They will have five children, none of whom will survive. During this period, he began to publish humorous, political comments in favour of the Whigs. In his texts he mocked politicians and hypocrisy. He even resorted to personal attacks, as in the case of the Irish Secretary, Lord Castlereagh (1769 – 1822), who was a very harsh suppressor of the United Irish.

Moore’s best-known work is “Irish Melodies” (1808-1834), which established him as a national bard. Lord Byron claimed to have known them by heart, and they were the source of inspiration for his own work “Hebrew Melodies” (1815). Moore was motivated by Dublin music producers William and James Power to conceive a major Irish work that would enlighten people’s souls far beyond the rhetoric of politicians. His ambition was from the beginning to become the Irish equivalent of the Scottish Roberts Scots: that would be, the national poet of the Irish. The main source of the Irish Melodies was Edward Bunting’s Collection of ancient Irish music (1797), which Moore knew through Hudson. Combining happy and sad musical tones, it expresses a variety of patriotic, erotic and philosophical themes. Although in England the work was known as a parody, it received many translations into German, French, Czech, Hungarian, Italian.

For these works, Moore was attacked by the columns of “The Anti-Jacobin Review”, which followed Torys’ political line, as ” the melancholy ravings of the disappointed rebel“. In a completely different direction, the Irish politician and leader of the Catholics, Daniel O´ Connell (1775 -1847), also known as “The Liberator”, used the Irish Melodies in his campaign for Repeal in the early 1840s. Moore’s song, “Where is the slave?” made the crowd and O´ Connell himself cry “I am not a slave!”

The anxieties and struggles of the Irish people for freedom and justice, also inspired by the American and French revolutions, were echoed in the Greek struggle for Independence. British policy towards Turkey and Greece was directly related to Great Britain’s wider interests in the Eastern Mediterranean.

The Greek Revolution symbolized, from an Irish point of view, a form of reaction against British rule, albeit indirectly. The Irish sought their independence, as did the Greeks. This is the mentality that motivated Thomas Moore to support the Greek Struggle. Thomas Moore was among the first fifty supporters of the Philhellenic Committee of London. Together with Lord Byron, he supported the Greek liberation struggle with money, armaments and propaganda. The people who rallied around the Greek issue at that time had diverse motivations. One should not forget about the political games taking place in the background. In his poem, “The Ghost of Miltiades”, Moore criticizes those who engage with rather “selfish” intentions in the “cause of freedom”:

The poem about Miltiades is not the only Greek reference in Moore’s work. In 1826, inspired by Byron, Moore composed the series of poems “Evenings in Greece”. The scene takes place on the island of Zea, the birthplace of Bacchylides, Simonides and other notable men of ancient Greece. Zea is an ideal place, “the most cultivated in Greece”. As Moore said, he connected a series of songs in a thread of poetic narration, so that those who could not sing would participate as readers. His emblematic poem “The sky is bright – To Greece we give our shining blades” has been set to music by Henry Bishop (1786 – 1855). Another well-known philhellenic poem by Moore is “The death of a Greek warrior”. 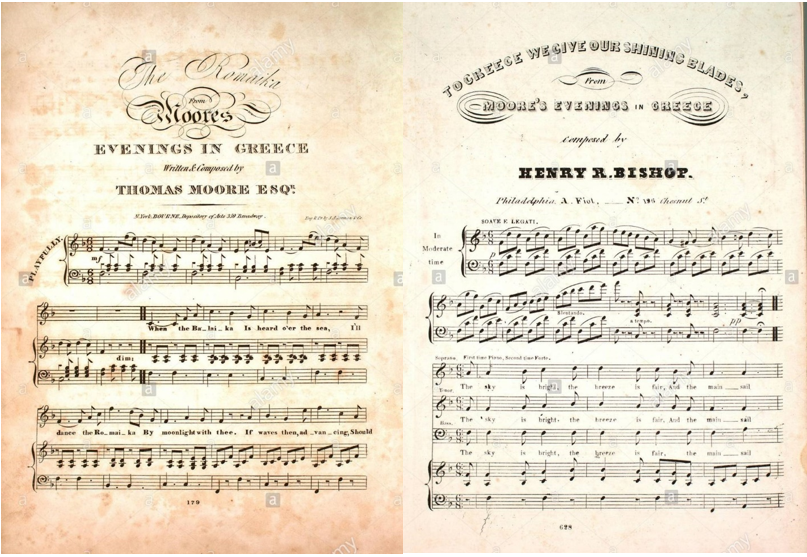 One issue that Moore was harshly criticized for was the destruction of Lord Byron’s memoirs, which the poet entrusted to him in 1818; Byron recounted his life, his love affairs and the views he had formed up to that time. When he died in 1824, Moore, along with publisher John Murray (1778 – 1843) to whom he had sold the copy to publish, politician John Cam Hobhouse (1786 – 1869) and some of Byron’s friends, who were concerned about his fame and reputation, gathered together and burned the only copy of his memoirs. Contemporary research does not attribute responsibility for this act solely to Moore.

Thomas Moore started composing a biography of Byron himself, which is considered to be his best prose work. He concealed much information about Byron’s personal life, which did not seem to satisfy Lady Byron, who still saw his work as very revealing about the poet’s life. Mary Shelley, also a friend of Byron and a valuable helper of Moore in completing biographical information, had the opposite opinion. For Shelley, Moore’s portrayal of Byron’s personality was fair, and she praised his eloquent literary style. Literary critic Howard Mumford Jones (1892-1980) considered Moore’s “Letters and Journals of Lord Byron: With Notices of His Life (1830)” to be “one of the four or five major English literary biographies”. 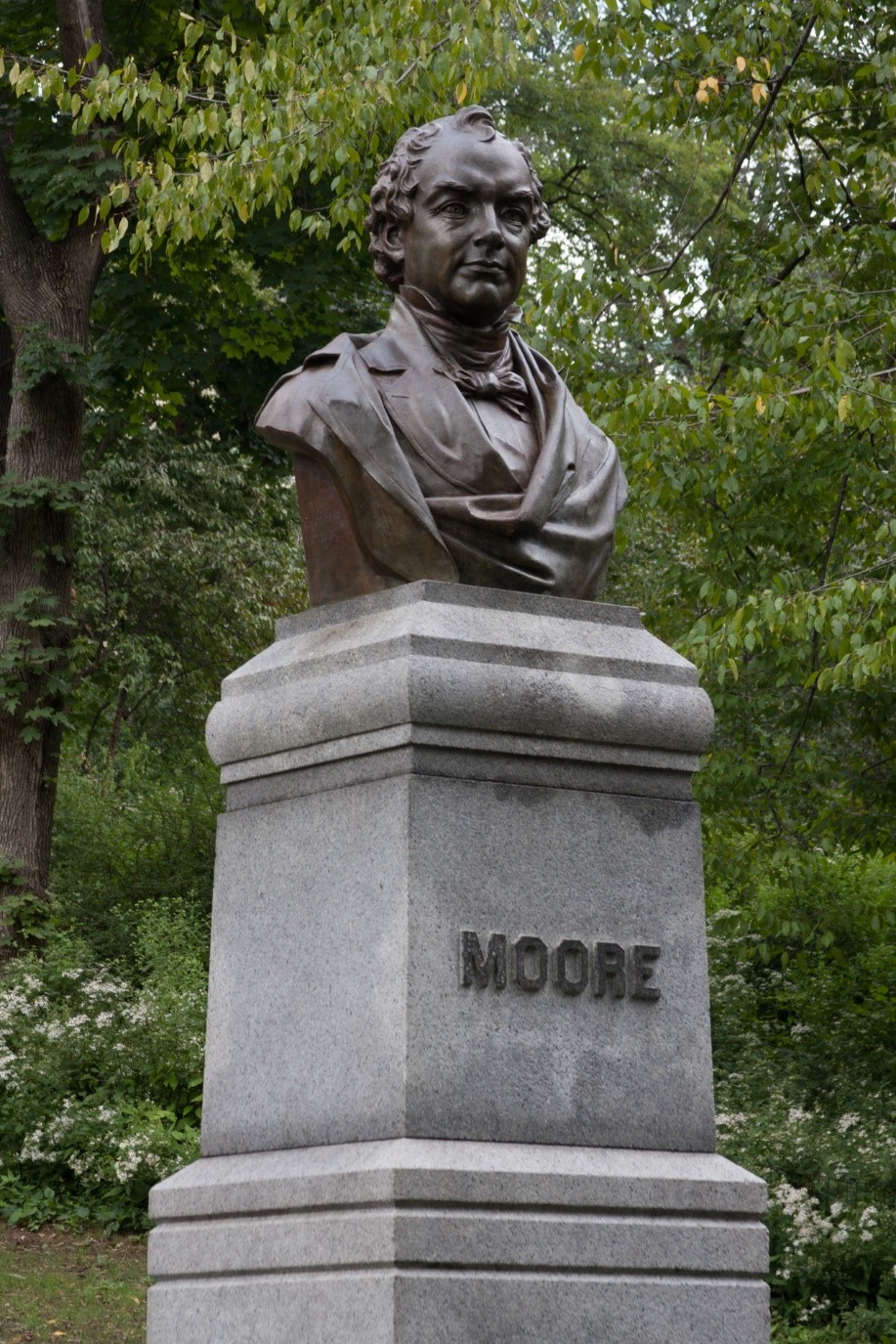 The Great Famine of Ireland in the late 1840s led Moore’s health to weaken. Thomas Moore’s end reminds of Mary Shelley’s end: he passed away on February 25, 1852; he had lost all his children and mourned the death of most of his comrades and friends.

SHP and Greece honour the memory of Thomas Moore, the great bard and defender of freedom, whose work presented in the most emblematic way, the struggle of the Philhellenes, who offered to Greece “their shining blades”. They also offered to Greece “the terrible edge of the sword” (as per D. Solomos’s national hymn) that led to its Freedom and independence.