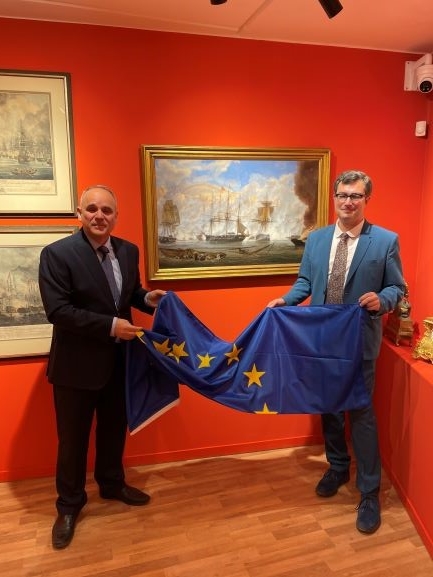 Mr. Kamaris was given a tour of the Museum, he saw the exhibits, and was informed about the history of the philhellenic movement, and the important role played by European Philhellenes who fought bravely on the side of the Greeks as volunteers, and by European politicians, artists and intellectuals who supported the philhellenic movement during the Greek war for independence.

The Society for Hellenism and Philhellenism (SHP) recalled that the Philhellenic movement helped Europeans understand their common values ​​and roots. It inspired thousands of young people to support the struggle of the Greeks, and many of them, even former enemies, to fight under the same flag for the same ideals.

These actions and the expression of solidarity with Greece, led to the first common European policy that emerged after the Treaty of London of 1827, and culminated with the Battle of Navarino and the establishment of the Greek state.

SHP also presented to the European Parliament the model of the Philhellenes monument that will be placed in the centre of Athens, on Vasilissis Sofias Street.

During the handover of the flag, Mr. Kamaris shared on behalf of the European Parliament the warm greetings of EP’s President Mr. Sassoli. In the words of the President, 2021 coincides not only with the bicentennial of the Greek revolution, but also with the 40th anniversary of Greece in the EU, fully re-joining the European family – a proof of the in temporal nature of the values of philhellenism.

The Boulevard magazine presents the Philhellenism Museum
Scroll to top