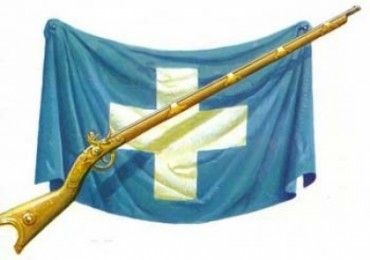 Although this French officer was present in Greece for a log period, there are few things we know about him.

According to the biographer of the Philhellenes Henri Fornèsy, Chardon de la Barre, Louis, was born in Amiens, France. He died in Bourganeuf of illness on January 30, 1858. He was a descendant of the knight de la Barre, known for a judicial error. The knight de la Barre was the subject of an incredibly unjust condemnation by the judiciary of France in the 19th century. This conviction was considered a disgrace to French justice, while the defense of his reputation and the fruitless request for the restoration of his memory was one of Voltaire’s most glorious acts.

According to the same source, Chardon de la Barre, before coming to offer his services in the struggle for Greek independence, had taken part in twenty-seven campaigns during the French Empire and inflicted nine injuries on his body, two of which they were very serious and due to shootings.

The French newspaper Le Constitutionnel enthusiastically reports on the departure of the Greek galley from Marseilles to Spartanism, on May 27, 1826, with passengers of twenty-seven officers and non-commissioned officers, including Chardon de la Barre. At the port, at the time of departure, cheers were heard everywhere “Long live the independence and freedom of Greece”!

As soon as he arrived in Greece, in 1826, he had the honor of officially taking over an emblematic flag, sent from France. This flag was embroidered by ladies in Paris. It is worth noting here that a large part of the flags used by Greek and Philhellenic fighters were designed and sewn by French ladies as part of the actions in favor of the Greeks.

This flag was bravely held by Chardon de la Barre, for the first time, at the Battle of Haidari, on August 19 and 20 of the same year (1826), at the Battalion of the Philhellenes. Fornèsy reports that Chardon de la Barre made a vivid and graphic description of this battle, which we unfortunately do not know if it was published and where it is located.

Chardon de la Barre was a cavalry lieutenant in the Cavalry at the time of Governor Kapodistrias. During the reign of King Otto, he was appointed rapporteur of the 2nd War Council (Military Court), in which he was distinguished for his value, his unchanging stability and his incorruptible justice, for which he often had to fight against foreign demands.

He became known in Greece for his service, many incidents of which sometimes occupied the Greek press. Among them are the bilingual French newspapers Sotir and the Era in Nafplio.

According to the official newspapers of the administration, and after the reorganization of the Army by the Regency, in 1834, Chardon de la Barre was transferred from the 2nd War Council, to the 5th Infantry Battalion of the line, with the rank of captain. In 1836 he was transferred from the 5th Infantry Battalion to the 4th. In 1839, when the 4th Battalion was reorganized, it seems that he continued his service in the new formation, but at the same time he was re-employed in the War Councils, as a Captain-Rapporteur.

As an individual, he was appreciated by all his superiors, he was loved and respected by all his old colleagues. In fact, his Greek colleagues had Greekized his name and called him “Sardon”, as the historian of the Regular Army, Christos Byzantios, mentions.

Anninos states that Chardon de la Barre had the consolation to die in his humble homeland, bringing the rank and file of the retired General of the Greek Army. This reference is rather erroneous or misunderstood, and is due to the translation of Fornèsy’s handwritten word “commandant” as “commander”, a translation published in the newspaper Seventh in 1884. The word also means “major”, and given that in 1839 he was a captain, we consider this rank closer to the truth. Indeed, the Sun newspaper, a few days before Chardon de la Barre died, in its January 10, 1858 issue, referring to the philhellenes living in Greece at the time, referred to him as “a retired Major in France.” From this publication it appears that Chardon de la Barre was among the Philhellenes who lived permanently in Greece, and that they simply came and went between Greece and France, as most French Philhellenes did. Indeed, even earlier, in 1827, it appears to have returned to France for some time, according to general records in Paris.

The Chardon de la Barre was honored with the Cross of the Knights of the Legion of Honor, which he had received during the Hundred Days, the Cross of the Savior’s Officer and the Excellence of Greek Independence. He proudly called this award, which he wore with more pride, “his military staff” for his service in Greece.

Silver Excellence of the Struggle, “to the heroic defenders of the homeland”, was received during the reign of King Othon to those Greeks or Philhellenes who had participated with the rank of officer in the military operations of the Greek Revolution. This medal was the highest honor (SHP collection).

Olivier Voutier – French officer, Philhellene who participated in the Greek...

24 April 1915 – One of the greatest crimes against humanity begins. The...
Scroll to top