SHP and the Philhellenism Museum collaborated for the implementation of the new emblematic production of SKAI, offering material and photographs of the Museum’s exhibits and allocating its spaces for shooting.

One of the episodes refers to two great Philhellenes. The British Lord Byron and the American Dr. Samuel Gridley Howe.

You can watch the trailer of the series here:

This is a special TV proposal that will be completed in six episodes, with cinematic vision, well-documented, with high aesthetics and great actors and professionals in front of and behind the cameras. The top event of modern Greek history unfolds through the eyes of the heroes. The emblematic figures of the Greek Revolution, the course of their lives, their participation and contribution to the struggle. Historians-speakers present and analyze the general historical context in the years of the Revolution of 1821 and analyze aspects of the personality of each hero. 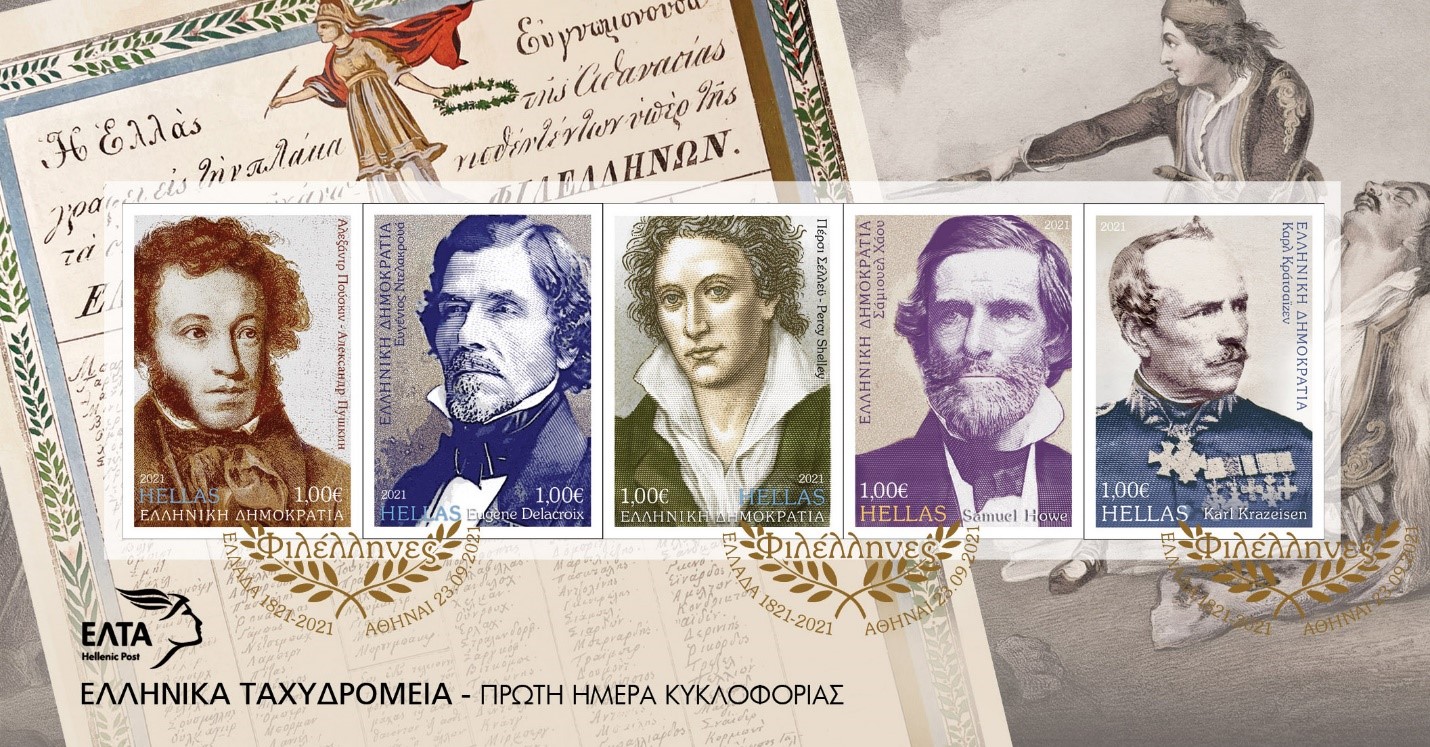 This commemorative edition of ELTA honors in September 2021 five emblematic personalities, representative Philhellenes, and through them, the contribution of Philhellenism to the liberation struggle of the Greeks.

You may follow here the official trailer of ELTA.

The five Philhellenes of the special edition are:

The British poet Percy Bysshe Shelley, writes his emblematic work “Hellas” and exclaims “we are all Greeks”. It reminds the civilized world that “our laws, our literature, our religion and our art have their roots in Greece […] without Greece we might still be barbarians […] the human form and the human mind reached perfection in Greece […]”. Shelley and his wife persuaded Lord Byron to go to Greece and identify with the struggle of the Greeks.

The Russian poet Alexander Sergeyevich Pushkin, inspired by Lord Byron, was the founder of Russian literature, to whom every Russian writer or poet owes his literary existence. A small sample of his philhellenic feelings towards Greece is his march entitled “Greece”: “… Forward Greece, get up! You do not unjustly nurture hopes, and the ancient mountains, Olympus, Pindos, the Thermopylae, they also shake the shields… “.

The French painter Eugene Delacroix, a leading figure of Romanticism, promotes lyrical Greece with his work. International public opinion discovers through his paintings, a Greece that fights for its freedom while suffering, and deserves moral and material support. Eugene Delacroix inspires dozens of other artists to communicate with their work, the same message throughout Europe, and feeds the philhellenic movement with emotion and passion.

The German officer, Philhellene volunteer in Greece and painter, Karl Krazeisen, promotes with his work the Greek and Philhellenes fighters of the Greek revolution of 1821. He serves the line of the German School of Fine Arts, which promotes epic Greece. A Greece that produces new Marathons and Thermopylae and fighters of the Revolution who are identified with the heroes of Greek mythology and deserve admiration.

The American Philhellene physician Dr. Samuel Gridley Howe, an admirer of Lord Byron, arrived in Greece as a volunteer in 1824, offering his services as a physician and fighter. Then in 1828 he organized a campaign in the USA for the financial support of Greece, and raised huge sums that he distributed to the population, supporting the newly formed Greek state. This great Philhellene and national benefactor of Greece, is evolving into an emblematic humanist and defender of human rights.

Greece rightly honors in the persons of these important personalities the crucial, and unprecedented in international history, contribution of the Philhellenes and Philhellenism to the liberation struggle of the Greeks. 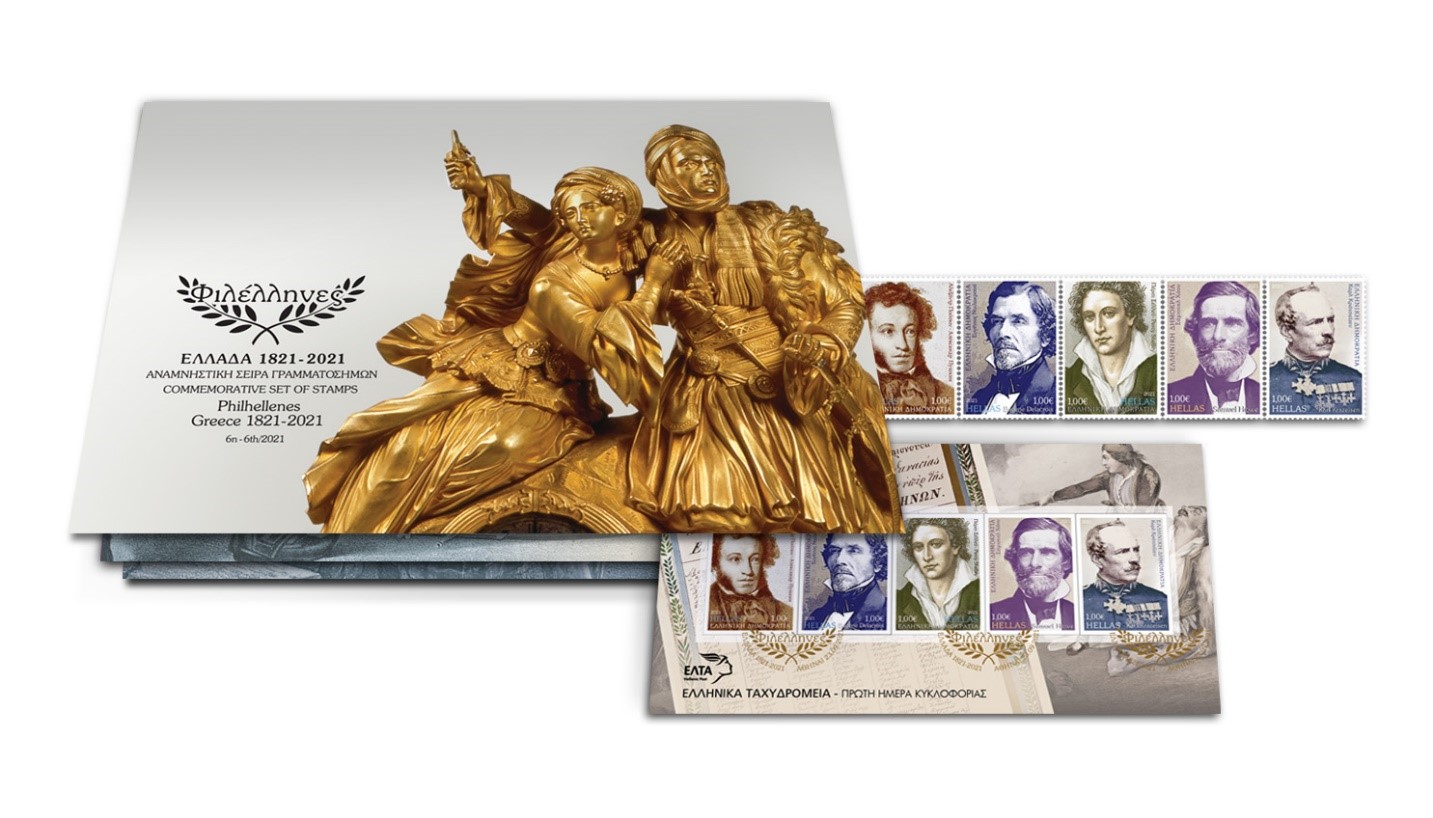 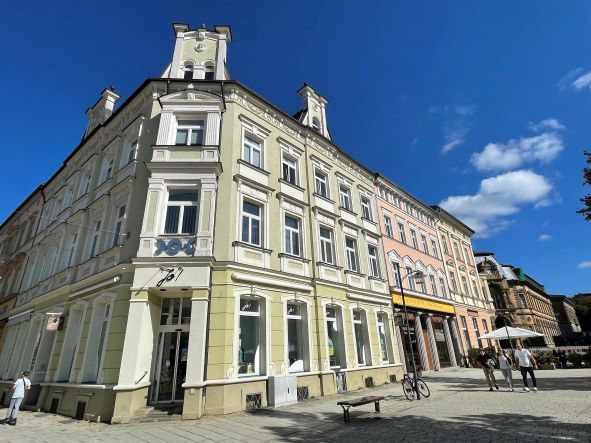 On the occasion of the 225th anniversary from the birth of the great Philhellene chief physician Heirich Treiber (1796 – 1882), the member of the advisory committee of SHP Costas Papailiou and his wife Margarita, visited the birthplace of the great Philhellene, the beautiful town of Meiningen in Thüringen, and paid tribute to the Treiber family tomb, which has been declared a protected monument in the area. They also located the Treiber’s family home in Meiningen Square, where his father ran the Pharmacy of the Court. 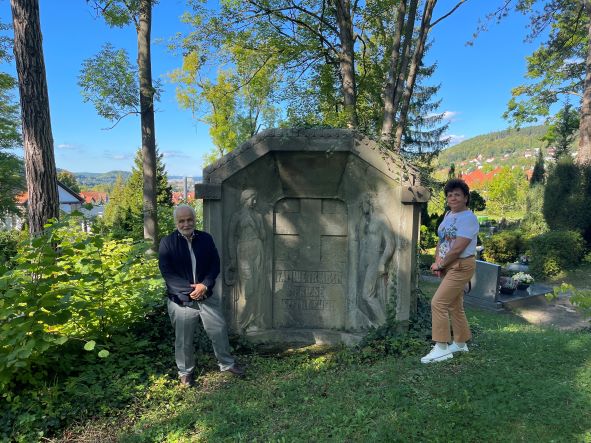 More details about Heirich Treiber and his enormous contribution to the Greek Revolution of 1821 can be found on the SHP’s website: 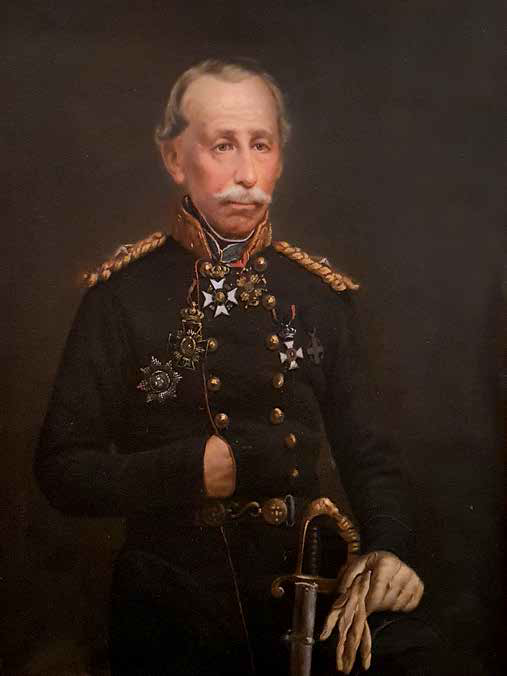 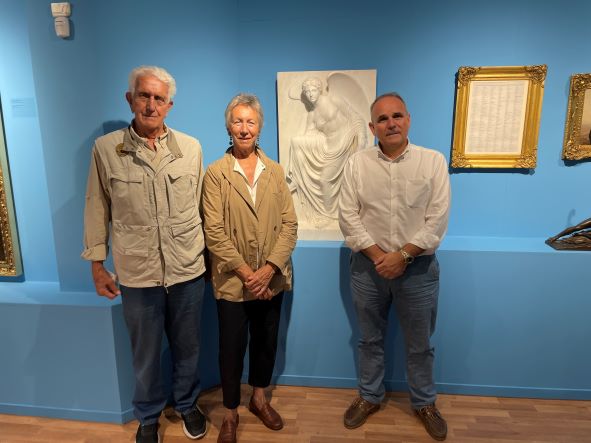 he Philhellenism Museum had the pleasure and honor to host at its premises the descendants of the great Italian Philhellene Michele Roccavilla who fought on the side of the Greeks during the War of Independence, and sacrificed himself for Greece.

The staff guided Alberto and Anna Roccavilla to the Museum and its collections. They then discussed the biography of their great ancestor and hero of the Greek Revolution and the contribution of the Italian Philhellenes to Greece and exchanged information on their sources and bibliography.

Mr. Alberto Roccavilla donated to the Museum the very important book he has written, presenting the life and work of his ancestor.

Alberto and Anna Roccavilla offered to help SHP and the Philhellenism Museum to seek information about other Italian Philhellenes, especially from the Piedmont area and to identify their descendants.

SHP thanked Alberto and Anna Roccavilla and announced its decision to honor them with the Lord Byron Medal at the relevant ceremony that will take place in 2022.

The following is a brief biography of their important ancestor.

Roccavilla, Michele (-1827). Italian Philhellene from Revello. Officer of the Sardinian Army. He was exiled from his country, due to the failure of the Italian patriotic revolution in March 1821, in which he had participated. At the end of 1825 he joined the Regular Army as a major under the orders of the French Philhellene Charles Fabvier. He distinguished himself in the battle of Chaidari on August 6, 1826, where he saved the Regular Army from an eventual destruction, due to the Turkish armament superiority. He was also distinguished in the siege of the Acropolis of Athens from the end of August 1826 until the defeat of the Greeks in the battle of Analatos, on April 24, 1827. Then he fell ill and was transferred to Methana, where he died on October 24, 1827. 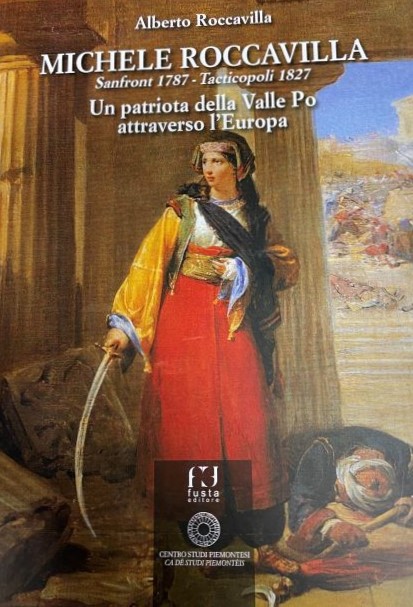 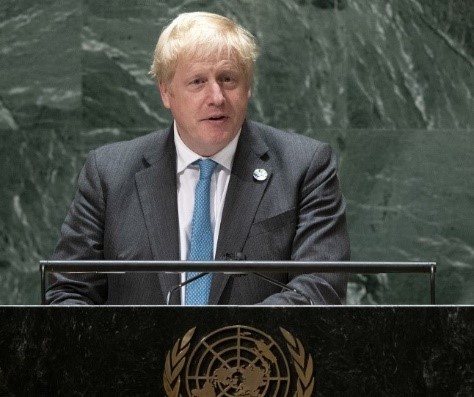 The British Prime Minister asked the citizens to mobilize for the environment, with references to Sophocles: “Sophocles had said “πολλὰ τὰ δεινὰ κοὐδὲν ἀνθρώπου δεινότερον πέλει“. The human species is wonderful. It is scary, but also admirable.

Boris Johnson used Antigone, “there are many terrible things, but there is nothing more terrible than man”, to emphasize that people are capable of evil, but also good, and asked humanity to mature.

He then called on all countries to participate in the 26th United Nations Conference on the Environment to be held in Glasgow in October 2021.

Boris Johnson, proved that philhellenism remains a corner stone of western civilization and a cultural package which contains solutions for all the challenges that humanity faces over time. 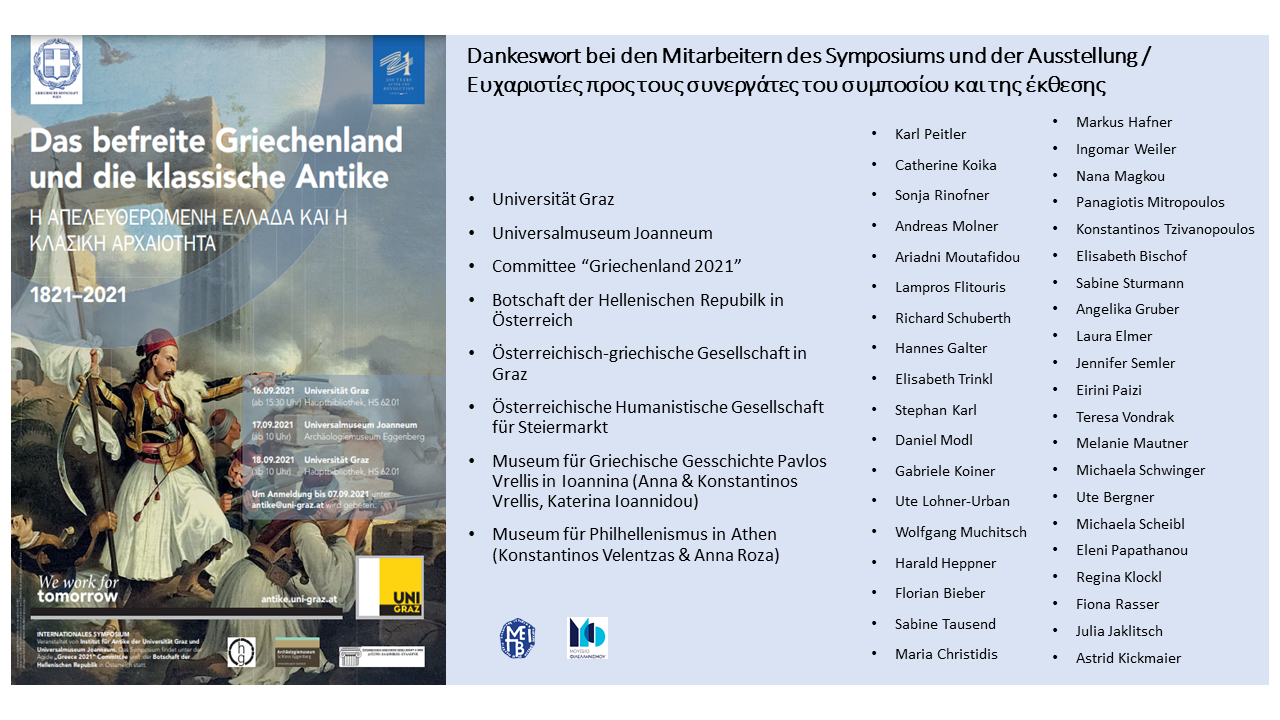 SHP and the Philhellenism Museum supported the International Symposium «Das befreite Griechenland und die klassische Antike» («The liberated Greece and the Classical Antiquity (1821-2021)») and the accompanying periodical exhibition, held at the University of Graz in Austria, during September 16-18, 2021. The initiative was taken by the Lecturer of Classical Archeology at the University of Graz, Elli Papazoi and was placed under the auspices of the Embassy of Greece in Austria. 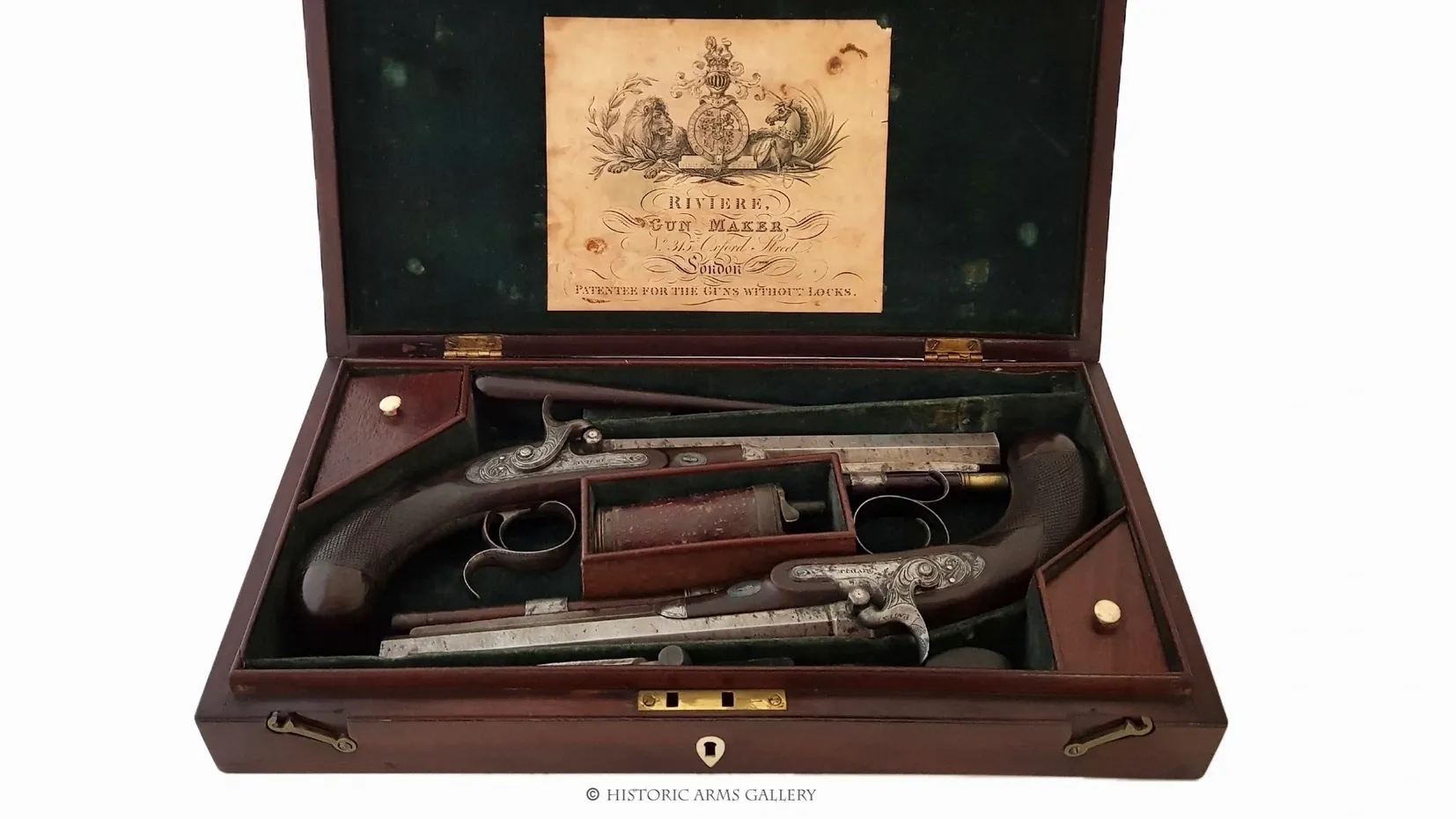 It was the great moment of the emblematic British Philhellene, founder of the Greek Navy, captain of Karteria and national benefactor of Greece, Frank Abney-Hastings.

This naval battle was also one of the greatest moments of Philhellenism. The Greek fleet with Admiral Frank Abney-Hastings, captains of the other ships the Danish-German Fabricius, the British Georges Thomas and the French general Dentzel, and dozens of other philhellenes and Greek sailors, destroyed the entire Turkish fleet in the Gulf of Corinth, opening the road to the liberation of mainland Greece. The African-American Williams also took part in this naval battle, leading a group of 15 sailors to take back control of the Greek ship Savior that had been left unmanned.

You may find the biography of Frank Abney-Hastings here: 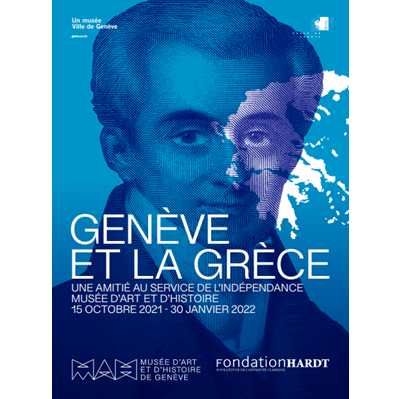 On the occasion of the 200th anniversary of the declaration of independence of Greece, signed on March 25, 1821, the Museum of Art and History of Geneva (Musée d’art et d’histoire, MAH) together with the Hardt Foundation for the Study of Classical Antiquity and the Philhellenism Museum, honor the friendship of Greece and Geneva from the 19th century with the exhibitions ‘Geneva and Greece. A Friendship serving Independence’ and ‘A Taste for Antiquity. Anna et Jean-Gabriel Eynard’, October 2021 – January 2022.

The exhibitions highlight the decisive role of Ioannis Kapodistrias, and his close Swiss friends and ardent Philhellenes, Charles Pictet de Rochemont and Jean-Gabriel Eynard, in Geneva’s integration into the Swiss Confederation and in the liberation of Greece from the Ottoman yoke. The exhibitions present the support offered by Jean-Gabriel Eynard to the Greek war of independence and the relationship of the Eynard family with Greek antiquity.

The full program of the two exhibitions follows: 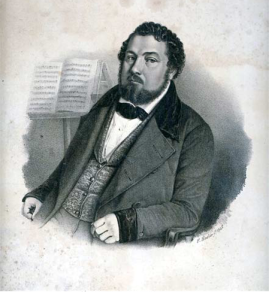 In 2021, apart from the great anniversary of the 200 years since the beginning of the national liberation struggle of the Greeks, 225 years have passed since the birth of the important philhellene and composer Johan Daniel Elster. This Philhellene survived the catastrophic battle of Peta and is the only eyewitness on what happened there. He described these historical events in detail in his well-known book “The Battalion of the Philhellenes”.

An honorary event will take place on this occasion on September 12, 2021 in the birthplace of Elster in Benshausen, Germany, in which the keynote speaker will be Professor Kostas Papailiou, member of the Advisory Committee of the Society for Hellenism and Philhellenism. In his speech, Mr. Papailiou will refer to the great role of Philhellenism in the National Uprising.